Courtney Stagman shut down the Edina offense as her team won the rematch of the 2021 Class 2A finals that was won by the Hornets. 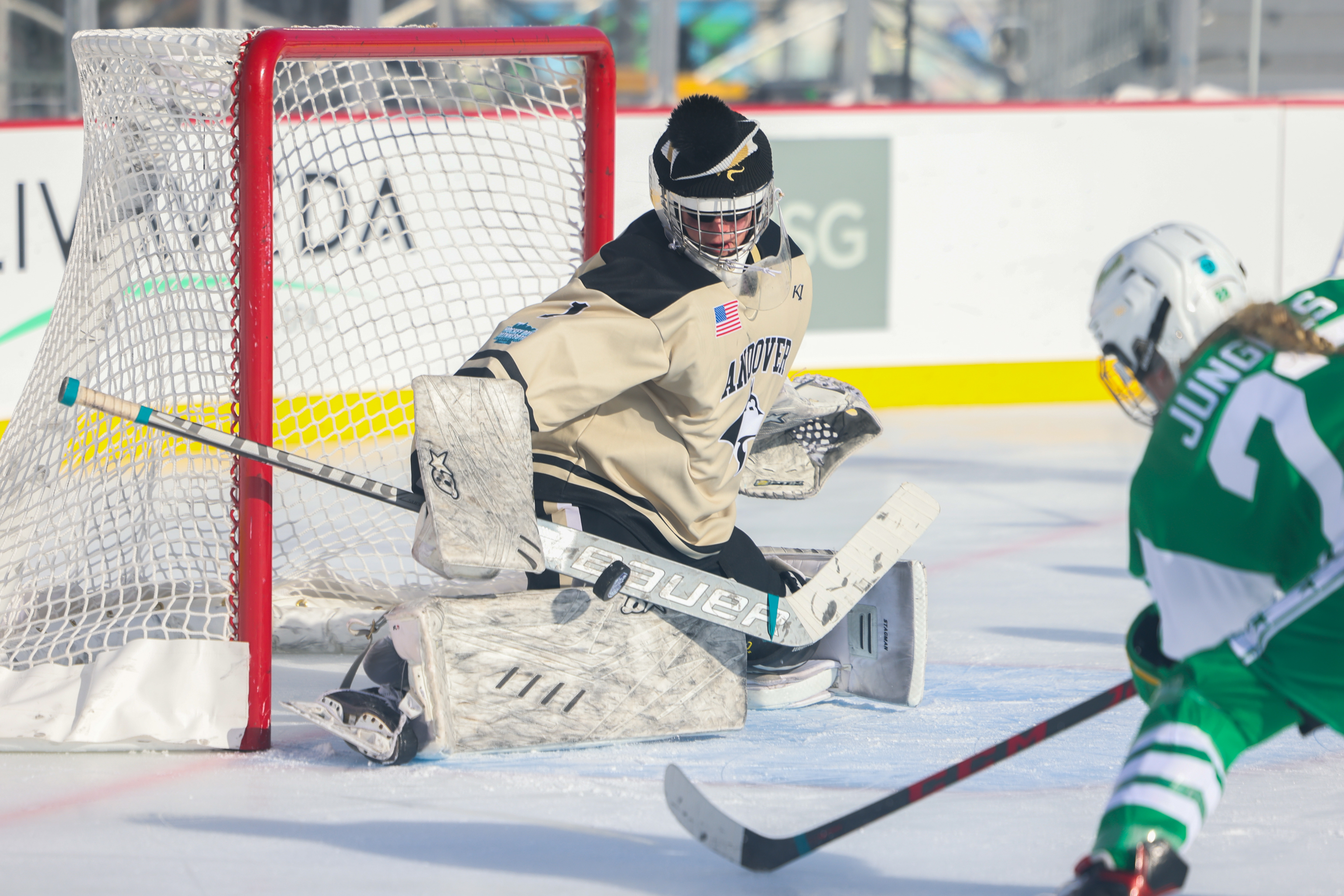 Andover goalie Courtney Stagman made 24 saves against Edina on her way to her sixth shutout of the season. The Huskies defeated the Hornets 4-0 on Hockey Day Minnesota in Mankato. Photo by Jeff Lawler, SportsEngine

Andover knew it had a big test against the 2020-21 state champion Edina (18-2). Looking to remain undefeated on the season and solve the mystery of how to beat one of the state’s top goaltenders in Edina’s Uma Corniea, the Huskies were ready to get pucks on net early.

The Huskies (19-0) scored two goals midway through the first period within just over a minute time span.

“Get pucks to the net. You never know what’s going to happen,” Huskies head coach Melissa Volk said. “We knew we needed to get net front and just to keep it simple.” 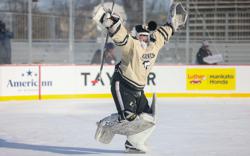 Keeping it simple is easier said than done in unusual playing conditions. As part of Hockey Day Minnesota, the game was played outdoors in 10 degree weather and a 9:30 a.m. start time.

“The game was a grind,” Volk said. “The TV timeouts were different. You get ahead, then there’s a TV timeout. The kids get a little fatigued mentally just because there’s been a lot of hype around Hockey Day the last few days.”

The Huskies didn’t let the conditions get to them though, sticking to their game plan and getting on the board first. After an awkward bounce off the end wall set sophomore Nora Sauer up to score her fourth goal of the season, the Huskies’ top line of Ella Boerger, Madison Brown and Isa Goettl gave the Huskies a 2-0 lead just a minute later. Boerger scored her first of two goals at the front of the net.

Goettl, an assistant captain and top-line forward, is nearing in on a career milestone, just three points shy of 100 career points. She has 30 points this year, split evenly between goals and assists, but she tries to put that milestone out of her mind. Instead, she turns her focus toward whichever opponent is up next — including today’s matchup.

“Edina is a very good team, but I feel like every game is going to be a battle,” Goettl said. “It depends on who wants to work the hardest and who wants to compete.”

According to Goettl, that team today was the Huskies. Even after losing several seniors to graduation and having a young team — including a defensive core made up of four freshman and two sophomores — they knew what they needed to do to get the job done.

“Sticks on pucks, clearing out the middle so [goaltender] Courtney [Stagman] could see,” Goettl said. "Getting pucks deep and making sure to get shots on their goalie to test her.”

Stagman, another top goalie in the state with a 1.18 goals-against average and .939 save percentage entering today’s game, didn’t let the conditions get to her. As her coaches sported gold leggings on the bench for the game, Stagman chose a different accessory — sunglasses.

“The sun was definitely out there and made it difficult to see,” Stagman said. “The puck bounced a little more and the ice is a little different than what we’re used to. The conditions were very different but the girls did a good job of overcoming those obstacles.”

Stagman was excited for the game, getting a chance to get revenge for the state championship loss last year. She did just that, earning her sixth shutout of the season while making 24 saves, including several huge ones in the waning minutes of the game, and being named the number one star of the game.

“My dream has been to shut out Edina,” Stagman said. “The girls put their bodies in front of the pucks to help me achieve that. It’s very exciting — a dream come true. Uma is very talented; she’s a great goalie. It was very intimidating going up against her, but it’s always fun to play against her and think, ‘Hmm, I want to beat her.’ That’s kind of what goes through my head.” 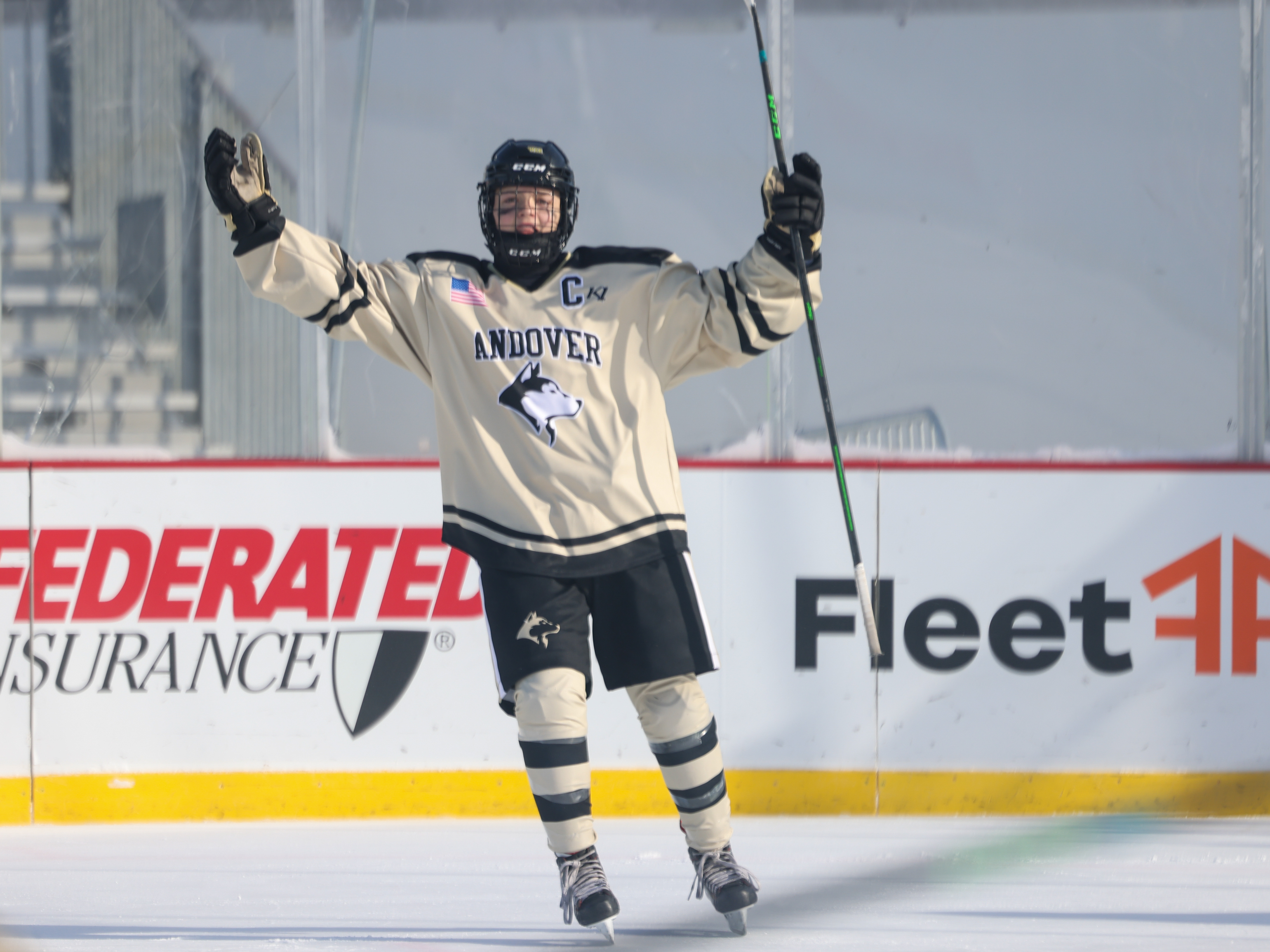 Andover's Ella Boerger celebrates her second goal of the game against Edina Saturday morning. The Class 2A No.1 Huskies defeated the No. 2 Hornets 4-0 at Blakeslee Stadium in Mankato. Photo by Jeff Lawler, SportsEngine

Seven Andover players found their way onto the score sheet as the Huskies defeated Edina 4-0 on Saturday, Jan. 22 at Blakeslee Stadium in Mankato to remain undefeated this season.

Kicking off the 16th annual Hockey Day Minnesota, Andover (19-0) and Edina (18-2) faced off for a 9:30 a.m. start, continuing a rivalry that’s followed them through state championship matchups the past two years, with each team taking one state title.

A faceoff of the top two teams in the Class 2A Let’s Play Hockey rankings promised for an exciting game. The game featured two of the state’s top goalies in the Huskies’ Courtney Stagman and the Hornets’ Uma Corniea, each backing their teams to several shutouts this season with Stagman earning her sixth of the season in the win as she made 24 saves.

Ella Boerger, leading the Huskies with 42 points entering the game, scored a pair of goals, including an empty net goal late in the third period to put a stamp on the Huskies’ win. Sara Kaiser and Nora Sauer scored the other two goals for the Huskies.

The Hornets’ Corniea, who earned her 30th career shutout earlier this week to break the previous Minnesota State High School League record of 29, made 22 saves. 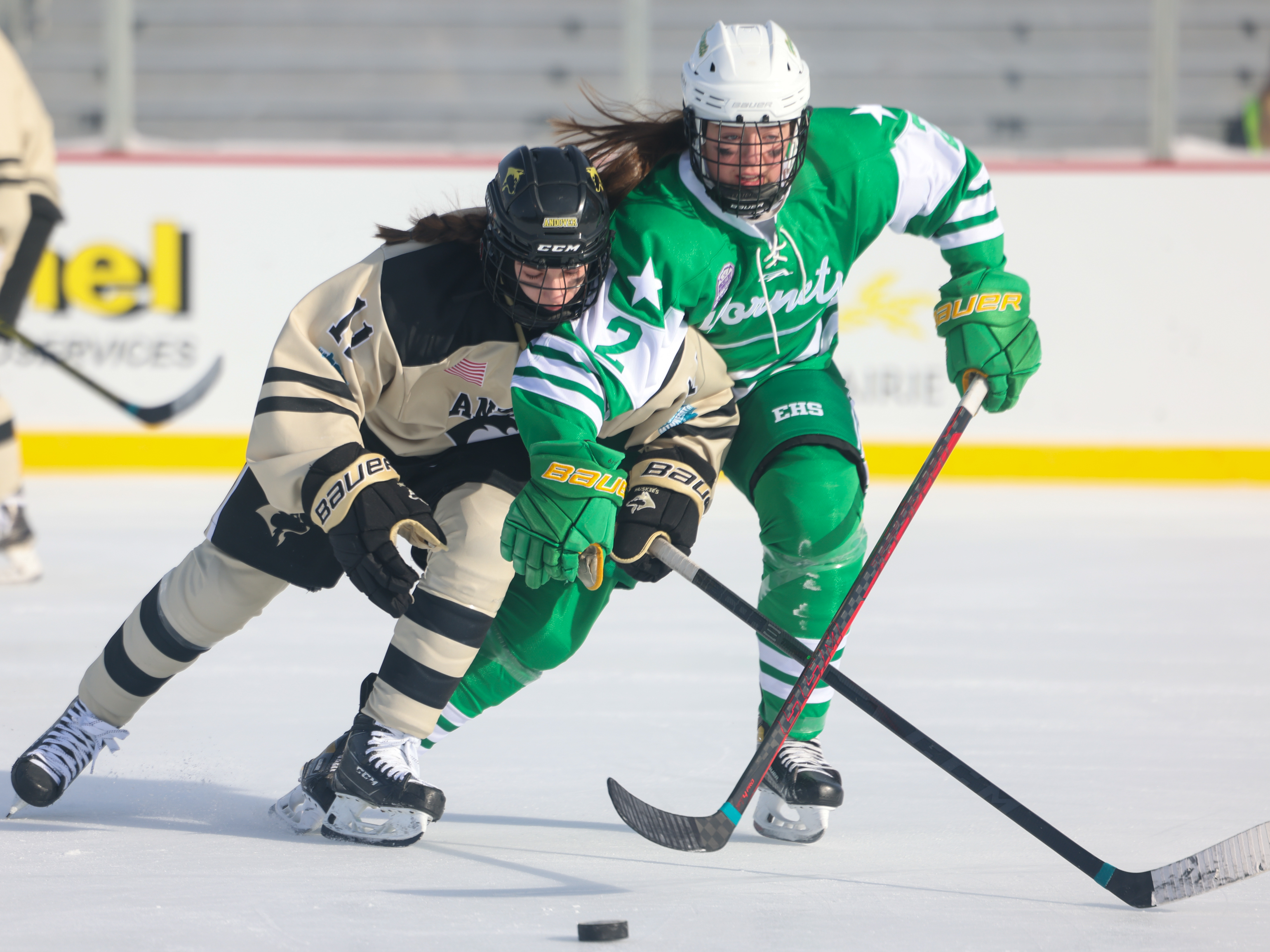