The Royals extend their winning streak to six games. 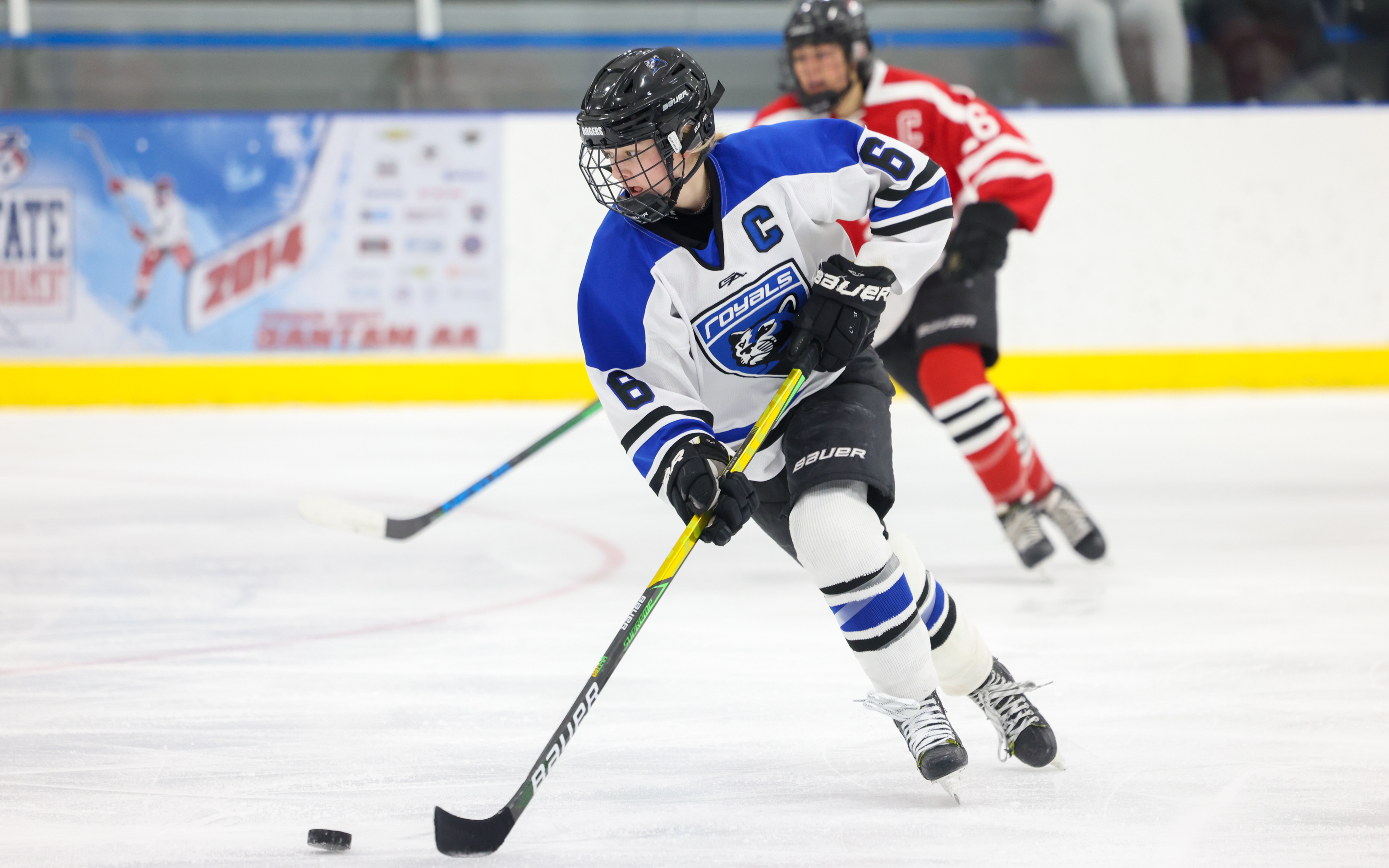 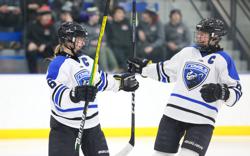 To say that Rogers senior forward Avery Farrell scored early and late for her team isn’t hyperbole. Not when she scored 44 seconds into the game and then again as time expired at the end of third period.

Indeed, Farrell scored early and often, netting four goals in her team’s 5-3 victory over Northwest Suburban Conference rival Elk River/Zimmerman on Friday night at Rogers Activity Center. Farrell gave her team 1-0 and 2-1 leads before the biggest goal of the night: a go-ahead goal with 2 minutes, 39 seconds remaining in regulation.

“I think Avery is really a big catalyst for our team energy,” Rogers first-year coach Emily Achterkirch said. “She brings it all the time. And her energy and passion out there to win every single puck really, when she has that, it flows through out entire team and builds everybody up.

“It’s a big part of who the Royals are.”

Who the Royals (17-4-2) are lately are winners of six consecutive games. Rogers, ranked No. 8 in Class 2A in the Jan. 12 coaches' poll, recorded three shutouts and have outscored opponents 28-7 during the stretch. Their only losses this season have all come to ranked teams: Edina, Andover, Proctor/Hermantown (Class 1A) and Class 2A, Section 5 rival Maple Grove.

“You know, a lot of it has to do with a new coach and a new presence and just overall a new vibe to our team,” Rogers senior defenseman Leah Hatcher said. “I think our coach brings a different type of confidence to us.”

Farrell got the confidence started Friday on her first shift when she intercepted a puck at neutral ice right outside the offensive blue line. She skated into the zone away from a defender before proceeding to stickhandle her way to the net and then slide the puck to the side of the goaltender.

But the Elks were quick to respond to their deficits. In the first period, sophomore defenseman Carly Humphrey went bar down with a shot off the rush to tie the game. The loud clang of the crossbar and Humphrey’s celebratory reaction signified the goal, No. 13 of the season for Humphrey.

Hailey Jussila answered for the Elks only 55 seconds after going down by a pair of goals, making it 3-2. Then with 1 minute, 47 seconds left in the second, Elks scoring leader senior Maddy Christian made a smooth move to the net, going top-shelf for her 23rd goal of the season to tie the game.

“We knew that we weren’t playing that bad,” Farrell said. “We were still competing. We just wanted to keep doing that and wear down the other team. Because we knew we were going to get our chances.”

The tempo of the game seemed to pick up more and more as the game went on. Things got particularly chippy in the third period as each team searched for the go-ahead goal. With about nine minutes left in regulation, Rogers sophomore defender Kamryn Messer and Elks’ Christian tangled with each other in the corner of the Elks’ zone. The play along the boards ended with the two players pushing and shoving each other right to the open ice.

Each left the game after being assessed a five-minute major for fighting and game misconduct.

“When it comes to Elk River, we’re always anticipating a battle, and they are, too,” Achterkirch said. “They’re a feisty, grind-it-out team, similar to what we are most days. And I’m not surprised that this game got as physical and chippy… as it did.”

Play continued again and time ticked down. Farrell got close to her hat trick with about four minutes to play, ringing a shot of the pipe. Then with 2 minutes, 39 seconds left, she found a rebound and buried it for the tiebreaking goal.

A few hats found their way onto the ice to celebration Farrell’s hat trick, her first this season. Farrell, a Franklin Pierce commit, is also riding a seven-game point streak with seven goals and 11 points in that span. Her four-point game also ties her season-high.

The Elks pulled their goaltender with 1:20 on the clock for a 5-on-4 advantage with players in each penalty box. The Royals had a couple of earlier chances at an empty-net goal, but it was fittingly Farrell that finished off the game, sending the puck from center ice into the net as time expired.

“For us, it was a mental game,” Achterkirch said. “We wanted to stay mentally in this game and mentally know that if we go out there every single shift and put our best out there, that we’re going to come out on top.”

Rogers beat the Elks in both meetings this season, also getting a 4-3 overtime victory over its Northwest Suburban foe on Jan. 11. That game started the current winning streak for the Royals. Rogers hasn’t allowed more than three goals in a game this season. 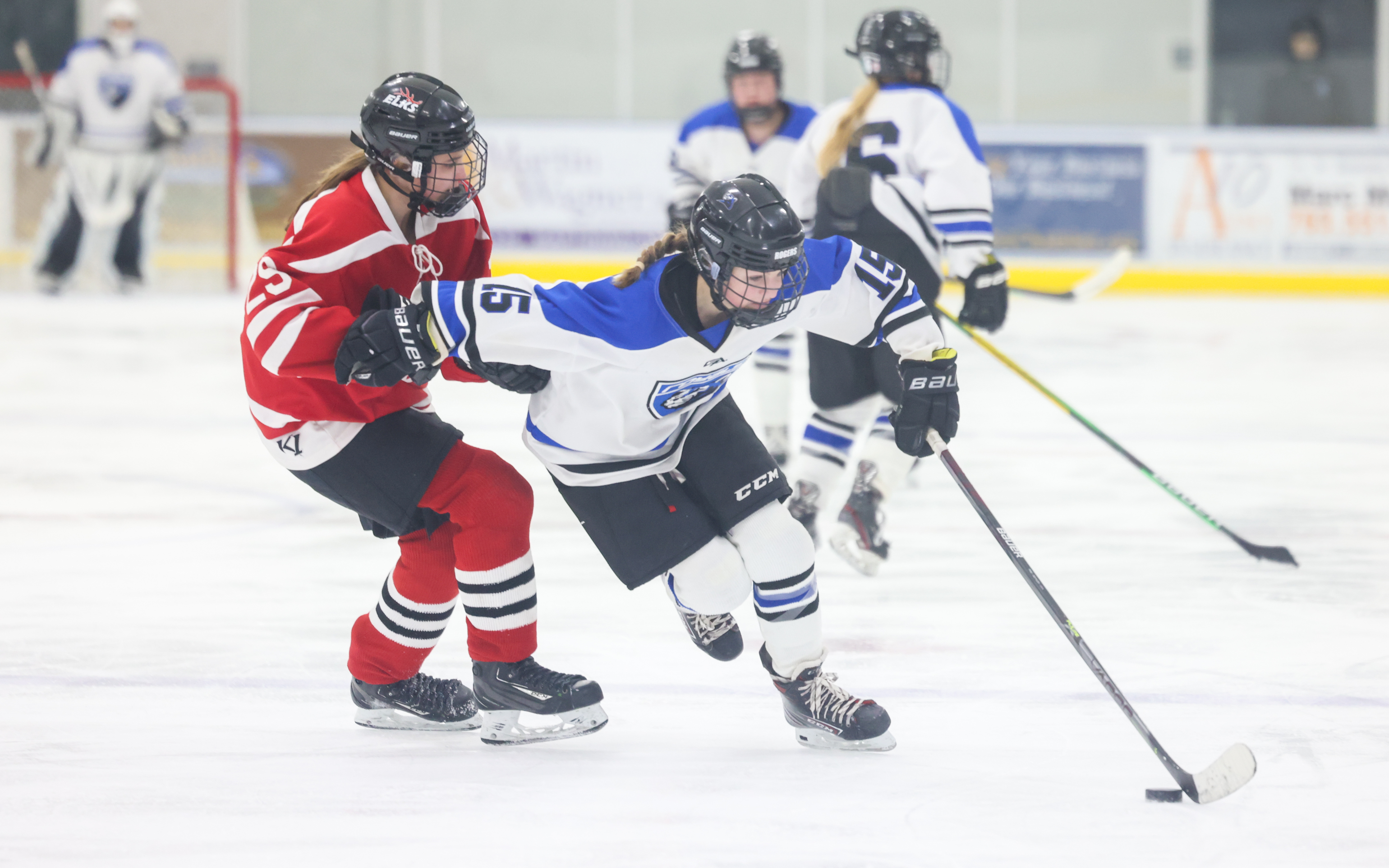 Rogers' McKenna Sandberg tries to gain entry into the offensive zone against Elk River Friday night. Sandberg had a goal in the Royals’ 5-3 victory over the Elks in Rogers. Photo by Jeff Lawler, SportsEngine

Senior Avery Farrell scored her first hat trick of the season. Her third goal broke a 3-3 tie late in the game to give Rogers a 5-3 victory over Elk River/Zimmerman in a Northwest Suburban Conference matchup Friday night at Rogers Activity Center. She added an empty-netter as time expired for her fourth goal.

In goal, junior Alexa Backmann made 14 saves for the Royals (17-4-2), while senior Ashley Hess stopped 38 pucks for the Elks.

The win extends the Royals’ winning streak to six games. They’ve recorded three shutouts and outscored opponents 28-7 during the stretch. The Elks (11-11-1) have lost three of their past four games and six of their past eight.

Rogers, ranked No. 8 in Class 2A coaches' poll, defeated the Elks in both meetings this season, also getting a 4-3 overtime victory over its Northwest Suburban foe on Jan. 11. That game started the current winning streak for the Royals. 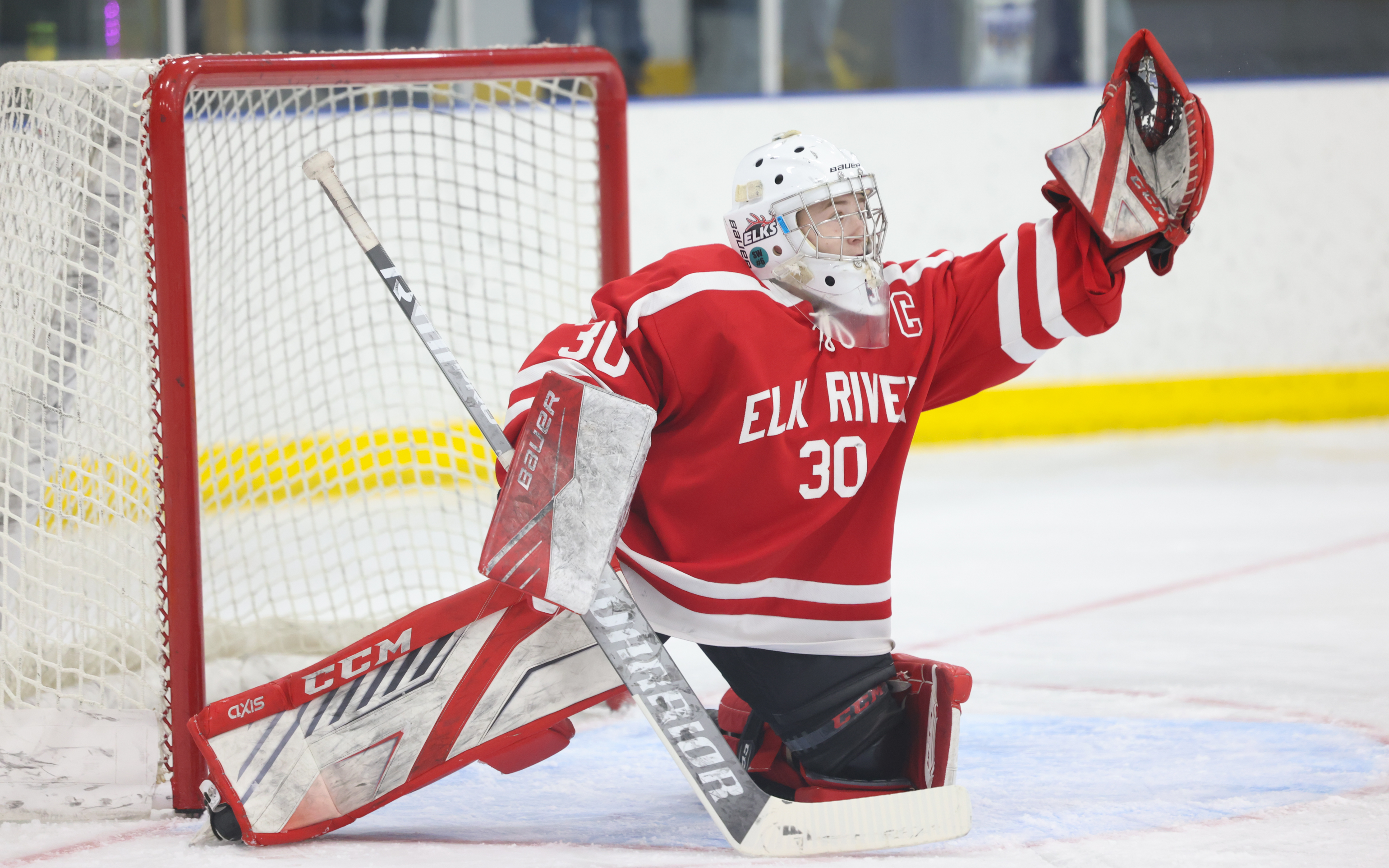