The Bears stormed to victory over the Hilltoppers on Saturday. 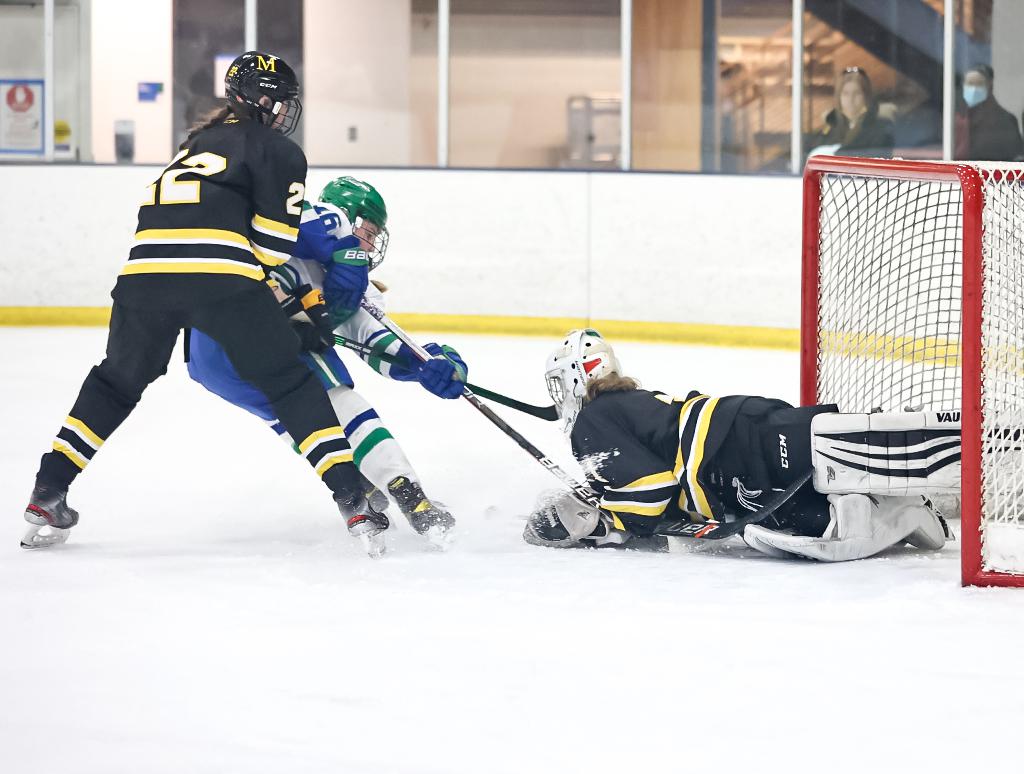 Blake's Sam Broz (16) finds the rebound and gets the puck under the stick of goaltender Rae Anderson. Broz scored two goals on assists from Suzy Higuchi in the Bears' 5-2 win over the Hilltoppers. Photo by Cheryl A. Myers, SportsEngine

Stop outside the Blake girls’ hockey locker room after a victory this season and there’s one song pumping: The 1970s hit “Rich Girl” by Hall and Oates.

The song choice was spontaneous, said Blake junior forward Sam Broz, and has been a staple ever since the second game of the season in mid-November, a 6-3 win at Cretin-Derham Hall.

“First win of the season, it just came on on the bus, and everybody was jamming out,” Broz said. 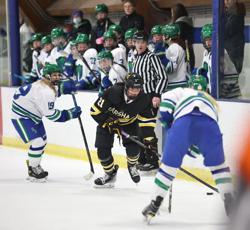 Blake was jamming again Saturday afternoon following a 5-2 victory over Duluth Marshall, ranked No. 8 in the Jan. 26 Class 1A coaches' poll. Broz scored a pair of goals as the Bears (11-9-0) swept the mini-series this weekend over the Hilltoppers (13-6-0) at Blake Ice Arena in Hopkins.

Duluth Marshall actually grabbed a 1-0 lead in the first period on a rebound goal from Annika Lindgren, her 10th tally of the season. But Blake responded 1 minute, 41 seconds later on the first Broz goal of the game. Blake junior Suzy Higuchi made the initial backhand shot and Broz pounced on the rebound after the puck wasn’t frozen.

The Bears got a lift only 17 seconds into the second period when freshman Malika Chebaclo scored her first varsity goal. Chebaclo has “grown into her own” and gained confidence the past couple of games, King said, and it paid off Saturday.

But the Hilltoppers answered 34 seconds later before the first minute of the second period was up, tying the game on junior Meredith Boettcher’s 10th of the season. Blake junior Remy Abraham scored her second of the season later in the period for the eventual game-winning goal.

Abraham and Chebaclo had plenty of cheerleading support from their teammates on their goals. Broz called Abraham “a legend.”

“She’s a big locker-room girl,” Broz said. “She’s always cheering everybody up. She’s dancing, she’s getting everybody hyped for the game.”

The Bears kept their foot on the gas in the third period, getting a shorthanded goal from Higuchi for her 17th of the season. She finished the weekend with three goals and three assists against Duluth Marshall and is riding a five-game points streak (4-6—10).

With 5:53 on the clock in the second period, Blake junior goaltender Abby Ziehl exited the game after taking a hit in the crease. Senior Molly Haag finished out the game, making 13 saves. Ziehl went home and will get some rest, King said after the game.

“She got demolished, and it was a bummer,” King said. “But she’s such a tough kid.

“She’s obviously a large part of our team. Knowing her, she’ll be back in no time.”

For King, the victories this weekend are huge for the program, but seeing her team continue to improve each time out this season is what she wants to see. Her players show up each day to work hard, get along with each other in the locker room and be coachable hockey players, King said. They want to learn and hold each other accountable, she added.

“Because if we’re trending in the right direction, we’re getting 1% better, we’re going to be the team that we want and need to be when the first section game rolls around,” King said.

Having King in place as the coach has been good for the Bears because she’s a really open person, Higuchi said. As a team, they’ve also stressed from day one this season that hockey doesn’t have to be your everything and your whole life, Higuchi added.

“But we’ve really emphasized playing for each other,” Higuchi said. “Playing for the girls next to you. And I think that the team has really picked up on that.”

With a 4-1 victory Friday, the pair of wins snapped a five-game losing streak for the Bears, losing to teams like Edina, Wayzata and Holy Family. Even during that skid though, King said her team played extremely well and is progressing in the right direction. She knew it was a matter of time before the wins would pop up.

“I thought we were the better team against some of those opponents,” King said. “So, not defining ourselves by wins and losses is important. It’s fun to hear the win song again.” 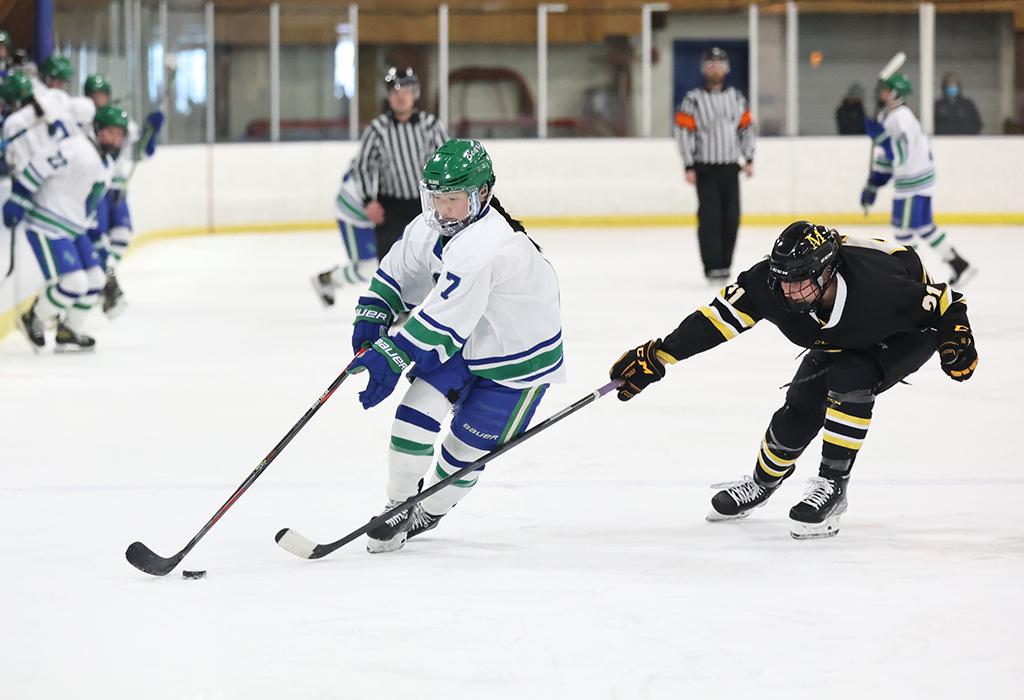 Junior Suzy Higuchi (7) skates the puck around the reach of defender Annika Lindgren (21). Higuchi scored three goals and added three assists in a pair of wins over Duluth Marshall this weekend. Photo by Cheryl A. Myers, SportsEngine

Blake used a two-goal second period to grab a lead and then score shorthanded and on a 5-on-3 in the third for a 5-2 victory over Duluth Marshall on Saturday afternoon at Blake Ice Arena in Hopkins.

Sam Broz got Blake’s first goal of the game in the first before freshman Malika Chebaclo scored her first goal off the season 17 seconds into the second period. Remy Abraham gave the Bears a lead later in the period on her second goal of the season.

In the third, Suzy Higuchi scored the fifth short-handed goal of the season for the Bears for a 4-2 cushion about five minutes into the period. It marked her 17th goal of the season, second short-handed and third of the weekend. Broz scored her second of the game only 11 seconds into a 5-on-3 advantage to extend the lead, her team-leading fifth power-play goal.

In goal, Blake junior Abby Ziehl stopped 9 shots before exiting with 5:53 left in the second period after taking a hit in the crease. Senior Molly Haag entered and made 13 saves. For the Hilltoppers, freshman Rae Anderson made 27 saves.

Blake (11-9-0) swept the weekend mini-series over the Hilltoppers (13-6-0), ranked No. 8 in Class 1A by Let’s Play Hockey, also earning a 4-1 home victory on Friday night. The pair of victories snapped a five-game losing skid for the Bears. 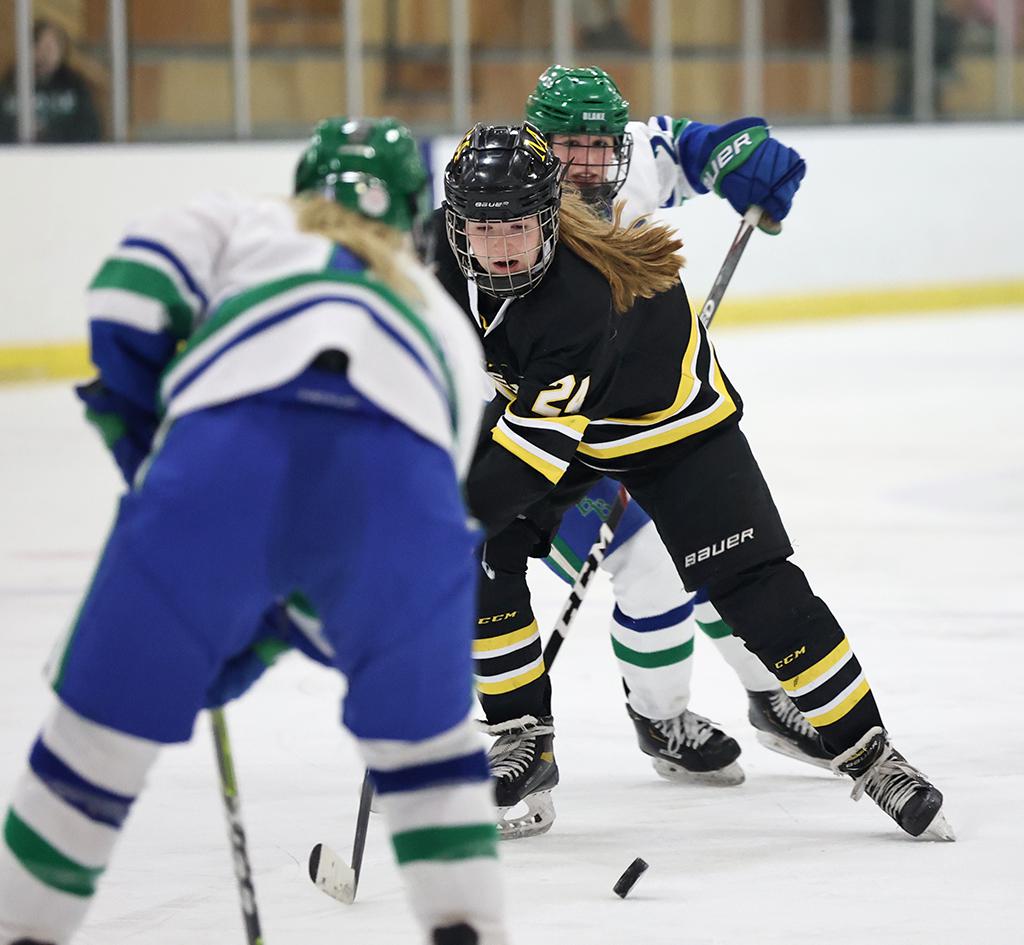 Meredith Boettcher (24) picks up the puck between a pair of defenders. Boettcher scored in the first minute of the second period to tie the game at two, 34 seconds after Malika Chebaclo gave the Bears a one goal lead. Photo by Cheryl A Myers, SportsEngine