Andover tops Warroad in battle of No. 1-ranked teams 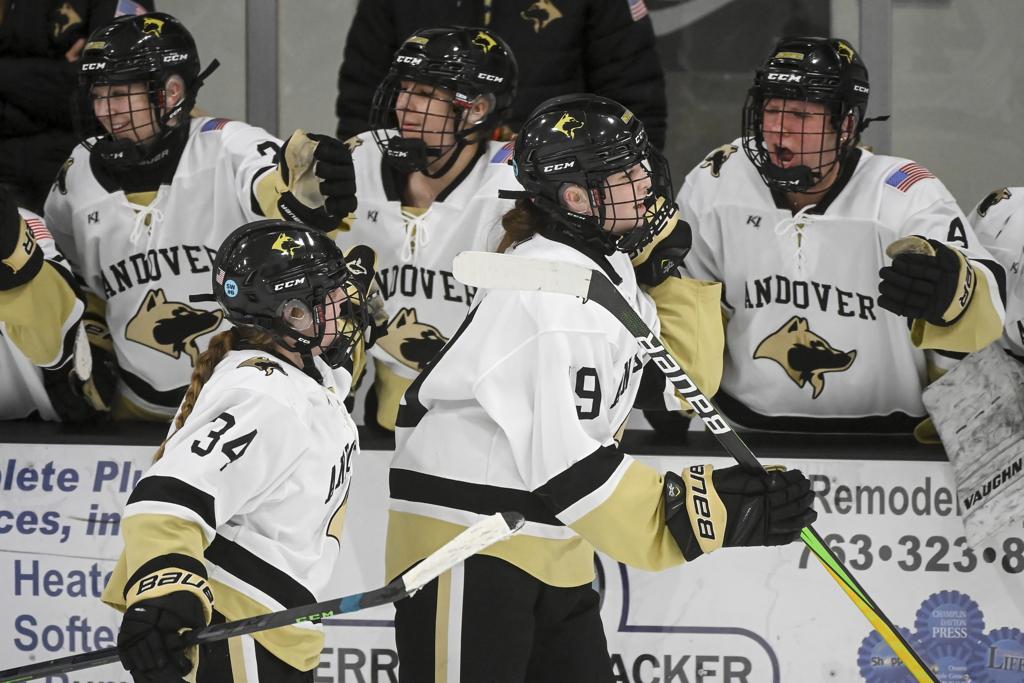 Games such as Thursday’s intense matinee with a fellow top-rated team are what the Andover girls’ hockey team missed last season, when COVID-19 precautions erased the nonconference portion of the schedule.

A year ago, Andover’s best competition during the regular season most often came during practices. Beating Warroad 3-1 provided a much better proving ground as the Huskies, ranked No. 1 in Class 2A, extended their undefeated record to 21-0.

“I love being in these tight games,” said Andover junior forward Isa Goettl, who capped her team’s victory with an empty-net goal for her 100th career point. “It’s scary while you’re playing in them, but after you get done, it’s great because you can figure out what your weaknesses are and what your strengths are. It really helps us.”

Dave Marvin, whose Warroad team holds the No. 1 rank in Class 1A, said his team benefited from seeing a tough opponent with the playoffs just ahead. The Warriors are undefeated against Class 1A teams and welcomed a sterner test.

“I liked the way we played,” Marvin said. “We were really happy with our game through two periods.”

Warroad (16-3-1) failed to capitalize on two power-play opportunities in the first period. Then Andover went ahead 1-0 as freshman defender Mackenzie Jones scored with 24 seconds remaining in the second period. It was the third goal this season for Jones.

Warroad responded, drawing even only 29 seconds into the third period. Junior forward Kate Johnson buried her 33rd goal of the season and re-energized the Warriors.

“It was hard to have them score so late on us,” Johnson said. “Getting one back right away got our momentum up.”

Then it was game on for each young but experienced team. They dress a combined 10 seniors, yet both teams were in their respective state tournaments last season.

Andover’s top line came through twice later in the final period. First, junior forward Madison Brown put away a rebound of linemate Goettl’s shot for her 13th goal this season. Then she returned the favor, giving up a clear shot on the empty Warroad net and passing to Goettl.

“That’s the type of selfless plays we take pride in as a team,” Andover coach Melissa Volk said. “Our kids really don’t care who scores as long as we’re scoring.”

“It was good for us to come here because we’re not good enough to win Class 1A without playing our best,” Marvin said, “This is the level we have to play at to be successful in the end.”

The host Huskies remained undefeated this season with a hard-fought 3-1 victory against Warroad.

Andover (21-0, No. 1 Class 2A) got a goal from freshman defender Mackenzie Jones with 24 seconds remaining in the second period. It was the third goal this season for Jones.

Warroad drew even on junior forward Katie Johnson’s 33rd goal of the season, this one scored just 29 seconds into period three.

Andover went ahead to stay as junior forward Madison Brown put away a rebound of linemate Isa Goettl’s shot. Brown now has 13 goals this season.
Gottel later scored on the empty net.

Warroad (16-3-1, No. 1 Class 1A) had its nine-game winning streak snapped. The Warriors previously lost 4-1 on Dec. 4 at the Andover Community Center. They remain undefeated against Class 1A teams.