The Red Knights were without their co-head coach but made easy work of their Metro West Conference foe. 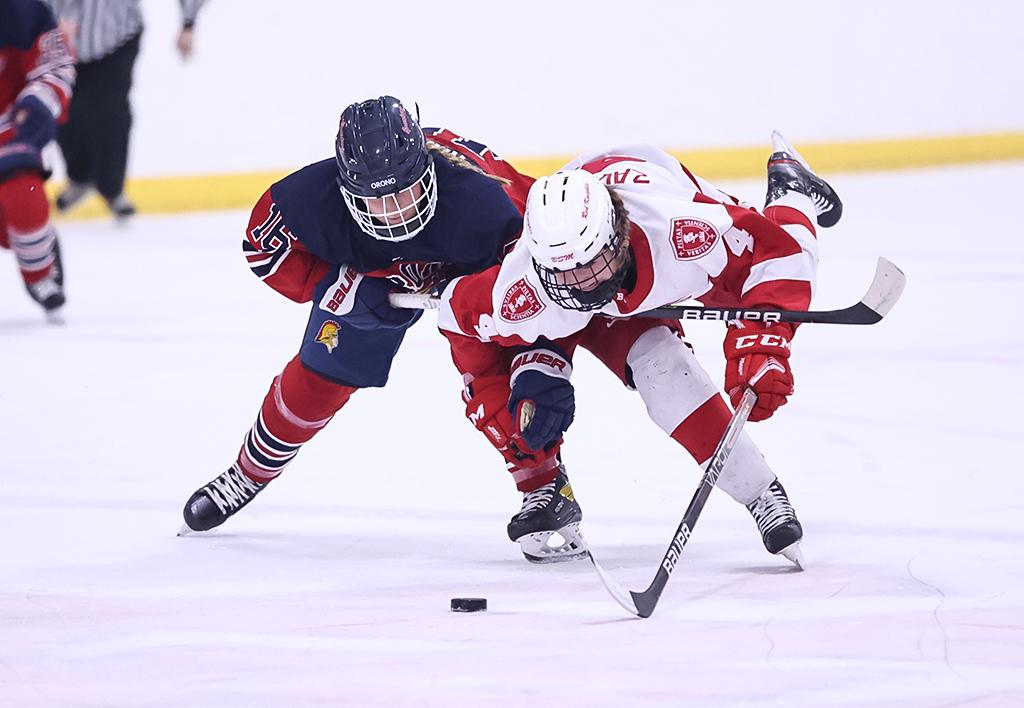 Mary Zavoral (4) draws a hooking penalty from Josie Raiche (16), which set up the first of three power-play goals for the Red Knights. Zavoral tallied a goal and two assists in the 6-1 victory over Orono. Photo by Cheryl A. Myers, SportsEngine

Benilde-St. Margaret’s co-head coach Kelly Pannek was nowhere to be found during the Red Knights’ Metro West Conference championship game against Orono on Thursday night, except for the No. 19 banner with her name on it hanging from the ceiling at St. Louis Park Recreation Center.

Pannek obviously missed the game for the very best reason in the hockey world: She’s an Olympian playing hockey with Team USA in Beijing, China.

Pannek’s Red Knights arrived at school early on Thursday, at 7:15 a.m., so they could stream the first U.S. women’s hockey game. Pannek recorded an assist on the team’s second goal, on the power play, during its 5-2 victory over Finland. 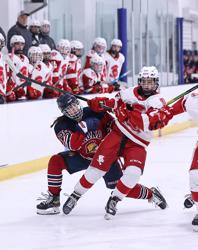 “She is truly an inspiration to all of us young hockey players, especially coming through the Benilde-St. Margaret’s program and then succeeding to be the star that she is today,” Red Knights senior Mary Zavoral said. “We honestly could not be more proud to be coached by her.”

The Red Knights followed up Pannek’s victory with a win of their own, defeating Orono 6-1 to win the Metro West championship. The Red Knights (17-5-1) were also successful on the power play, going 3 for 5. The win was the 11th consecutive for Benilde-St. Margaret’s, ranked No. 7 in the Class 2A coaches' poll released Feb. 2. The Red Knights have outscored opponents 53-7 in that stretch and recorded five shutouts.

Benilde-St. Margaret's took command early in the game with a pair of first-period goals near the crease from senior Lily Mortenson for her first multi-goal game of the year. They were both gritty rebound goals like most of her 10 tallies this season.

“I knew I wasn’t going to get a pretty goal and shoot the puck, so that’s just where I wanted to be because I have a lot of gritty goals this year,” Mortenson said. “We’ve got to get hard-working ones.”

The gritty tip, screen and redirection goals are a focus for the whole team as well, said Red Knights co-head coach Kevin Gray.

“We know to get to the state tournament and to win a state title, the teams that we’re going to beat, they have goaltenders,” Gray said. “You’re not going to beat them one-on-one.

“It’s fun to watch them grow and just get pucks on net.”

With the Red Knights leading 2-0 after a period, Orono (21-3-0) regrouped in the second period and appeared to have a better jump from the start. The Spartans capitalized and cut into the deficit when Zoe Lopez tapped in the puck for her 21st goal to extend her point streak to eight games. That made it a 2-1 game with 10:31 left in the second.

The two teams engaged in some end-to-end hockey for a bit in the middle frame, getting big saves when they needed them from their respective goaltenders.

“(The Spartans) raised their level and we probably stayed the same and went down a little,” Gray said of the second period. “Then we were able to pick it back up a little bit. It’s just two good teams playing. A little momentum. I was really proud of them. They found their game again.”

With 1 minute, 32 seconds left in the period, the Red Knights regained their two-goal lead, getting a goal from freshman Kendall Hassler on a fluky play. Sticks collided with the puck in front of the Orono net, causing the puck to jump high into the air and land over the Spartans goaltender and in the back of the net.

It was Hassler’s ninth goal of the season and third in the past two games. She was one of the young players for the Red Knights who played great Thursday, Gray said.

The Red Knights extended their lead in the final period with another trio of goals. Two came 45 seconds apart about five minutes in when they capitalized on a 5-on-3 power play that was set for 1 minute, 25 seconds. But the Red Knights didn’t need all that time.

First, it was senior and Lindenwood University commit Emma Hoen with a blast from the faceoff dot to make it 4-1. Then another gritty goal from St. Thomas commit Zavoral for 5-1. Sophomore Sienna Duffy added the last goal with under three minutes to play, sending a juicy rebound into a wide-open net.

“Tonight we got to see, ‘Are we able to play in these intense games and get tested?’” Gray said. “They bounced back tonight. We were able to respond to that. I like the way we’re playing right now.”

The loss for Orono, which surrendered a season-high six goals, was only its second in regulation and also snapped its 10-game winning streak.

The Red Knights started the season 3-4-1 but have been on a run nearly ever since. Even with the losses on the schedule, they were still playing good hockey early on, Gray said. And finding a winning-streak stride near season’s end is similar to seasons past, Mortenson said.

“Every season toward the end, we’ve always gotten that long streak,” Mortenson said. “I think the first half of our season is really hard, and that really helps us, because that just makes you more ready to play later in the season. So I think we’re definitely getting to where we’re supposed to be now, for sure.” 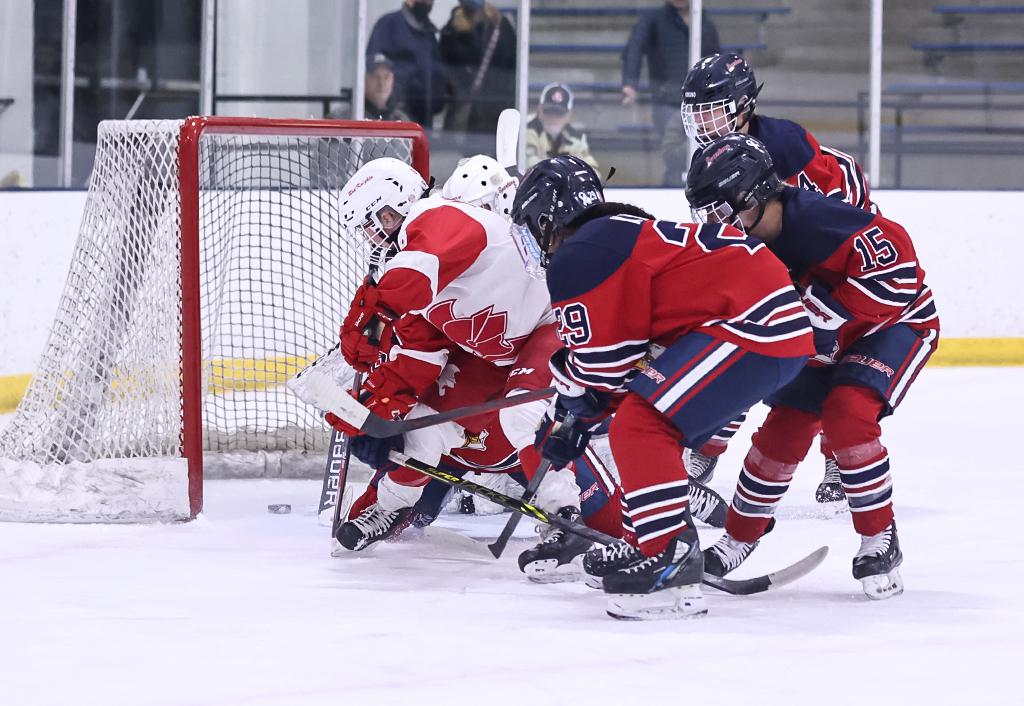 Lily Mortenson picks up the rebound and finds the back door open for her second first-period goal and eventual game-winning goal. Benilde-St. Margaret's handed Orono its first conference loss on Thursday night. Photo by Cheryl A. Myers, SportsEngine

The Red Knights took command early with a pair of first-period goals from senior Lily Mortenson. Orono cut into the deficit on a goal from Zoe Lopez in the second, but the Red Knights regained the two-goal margin late in the period on a goal from freshman Kendall Hassler.

Benilde-St. Margaret’s built on the lead in the third period, capitalizing twice on a 5-on-3 advantage with goals from Emma Hoen and Mary Zavoral 45 seconds apart.

In goal, senior Allie Van Stelten stopped 16 shots for the Red Knights (17-5-1) while Orono junior Celia Dahl made 29 saves at the other end.

The Red Knights started the season 3-4-1 but have been on a run nearly ever since then. They’ve won 11 straight games with five of the 11 wins coming in shutout fashion and have outscored opponents 53-7 during that stretch.

Meanwhile, Class 1A No. 2-ranked Orono suffered only its third loss of the season – second in regulation — on Thursday, falling to 21-3-0. The Spartans also rode a 10-game winning streak into the game. The six goals allowed Thursday is a season-high for Orono. 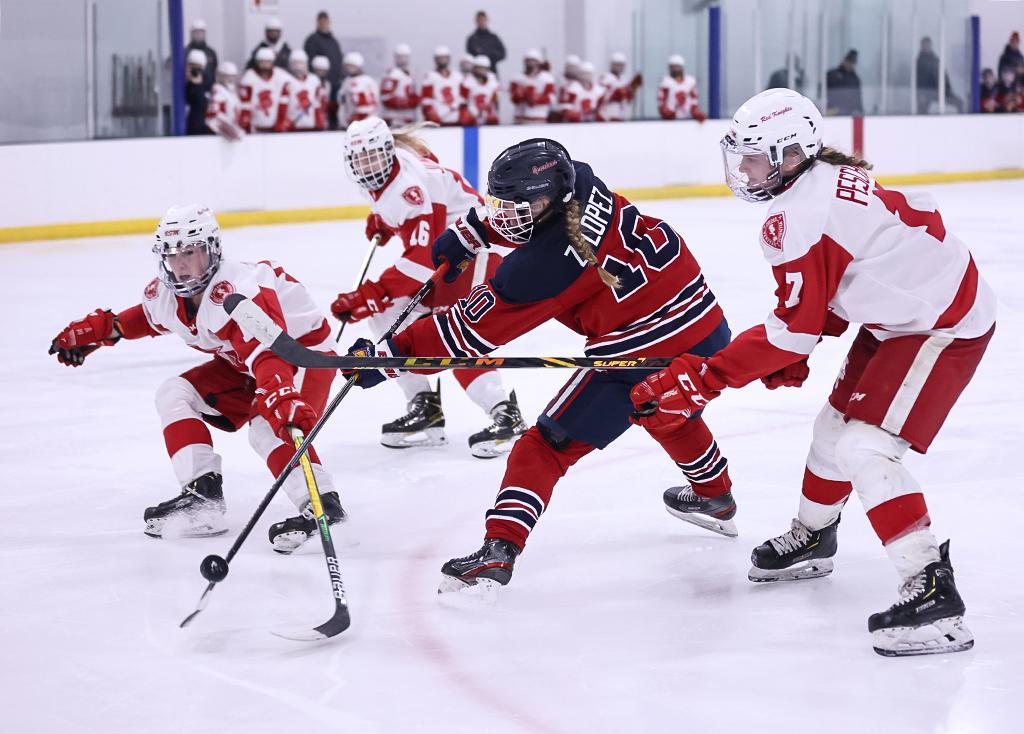 Orono's Zoe Lopez (10) fires off a shot between a trio of defenders late in the game. Lopez scored the Spartans' only goal in a 6-1 loss to Metro West Conference foe Benilde-St. Margaret's. Photo by Cheryl A. Myers, SportsEngine