The Stars used an explosive five goal performance to beat the Mustangs on Tuesday. 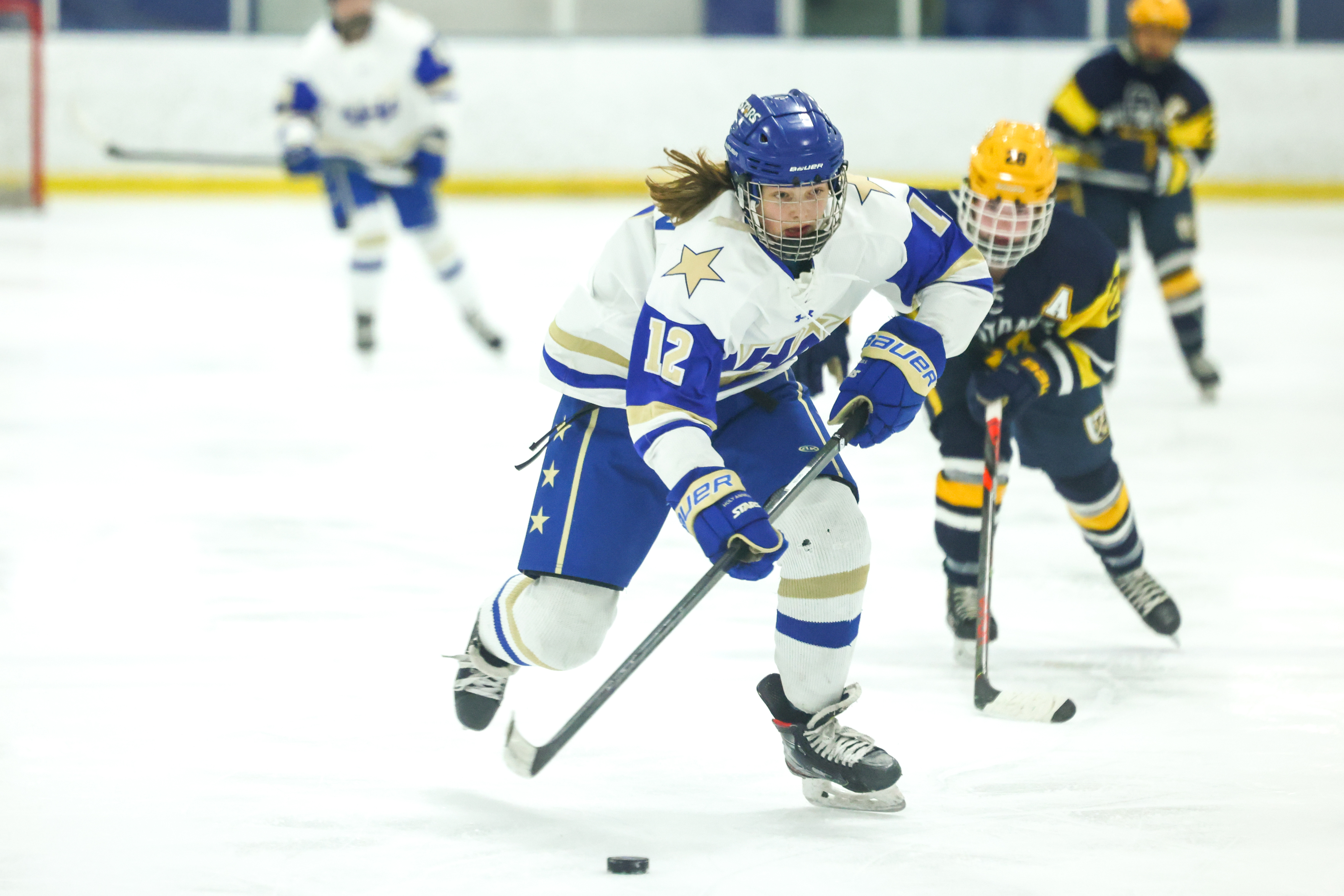 Holy Angels' Audrey Garton had two goals and two assists against Breck Tuesday evening in Richfield. The Stars advanced to the Class 1A, Section 5 final with a 5-1 victory over the Mustangs. Photo by Jeff Lawler, SportsEngine

After seven claps, a short yet excitable locker room cheer for their win, and a Top Gun get-up awarded to the team’s player of the game, Holy Angels is laser focused on their next win-or-go-home matchup.

The No. 2 seed in Class 1A, Section 5 the Stars (22-4-1) rolled to their seventh consecutive win on Tuesday — hence the seven claps — as they defeated Breck 5-1 at Richfield Ice Arena.

Sophomores Audrey Garton and Bella LaMere are two of the Stars’ top three scorers and each contributed four points in the win, as Garton recorded two goals and two assists and LaMere scored one goal and added three assists. LaMere assisted on both of Garton’s goals — which isn’t surprising, given the two have played together for several years — as LaMere found her friend’s stick on long, streaking passes that Garton converted to goals.

Despite playing against a team with three wins entering Tuesday’s game, Garton said the Stars’ game plan didn’t change. Breck, seeded No. 6 in Section 5A, made it to Tuesday’s semifinal match-up after a 2-19-1 regular season and upsetting No. 3 Mound Westonka in a 3-2 overtime victory during the section quarterfinal game on Feb. 12. 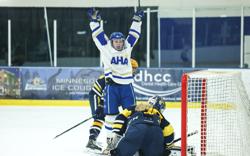 “We always say compete, bring our best, and be resilient,” Garton said. “It doesn’t matter who we’re playing, we’re going to play the same. We came in expecting it to be a hard game and knew they were going to bring their best.”

“I think our fans do a really good job of being loud,” Garton said. “But Breck had a bunch of fans here tonight so we needed them and I think it really helped us.”

Stars head coach Ryan LaMere echoed Garton’s message of consistency and resilience, no matter who they’re playing. Breaking it down into period by period wins has helped, focusing on winning each period, which then leads to favorable results at the end of the game.

“The first period tonight we won 1-0 so we celebrated that,” LaMere said. “It was a small win, but we also knew we had to get better the rest of the game. We felt we controlled the offense throughout the period but then needed to work on getting the quality chances we wanted. From there, we made a few adjustments to get more puck to the net and down low, and continually get better throughout the game.”

While the Mustangs’ season came to a close with Tuesday’s loss, the Stars move on to a tough Class 1A, Section 5 Championship game against a 23-3 Orono team that is seeded No. 1 and defeated Delano/Rockford 8-1 on Tuesday. The Stars suffered two-goal losses in both games against Orono during the regular season, but LaMere insists on solely looking to Thursday’s matchup.

“Orono is a really good team,” LaMere said. “They’re a very well-coached, well-structured team. In preparation, we watch video and talk about what we need to do to make the necessary changes in the game.”

LaMere credited the Stars’ success on focusing more on mental engagement and conversations in practice which help prepare them for games. In addition, LaMere is teaching his team to celebrate their past wins but use both the successes and failures to get better moving forward. LaMere said they’ll be ready to face Orono on Thursday.

“We’ve trained all year, we know what we’re doing, and we know our systems,” LaMere said. “Now it’s executing the small things. At the end of the day we’re going to make mistakes but we’re going to recover from them and in the end be so much better off. It should be a great game.” 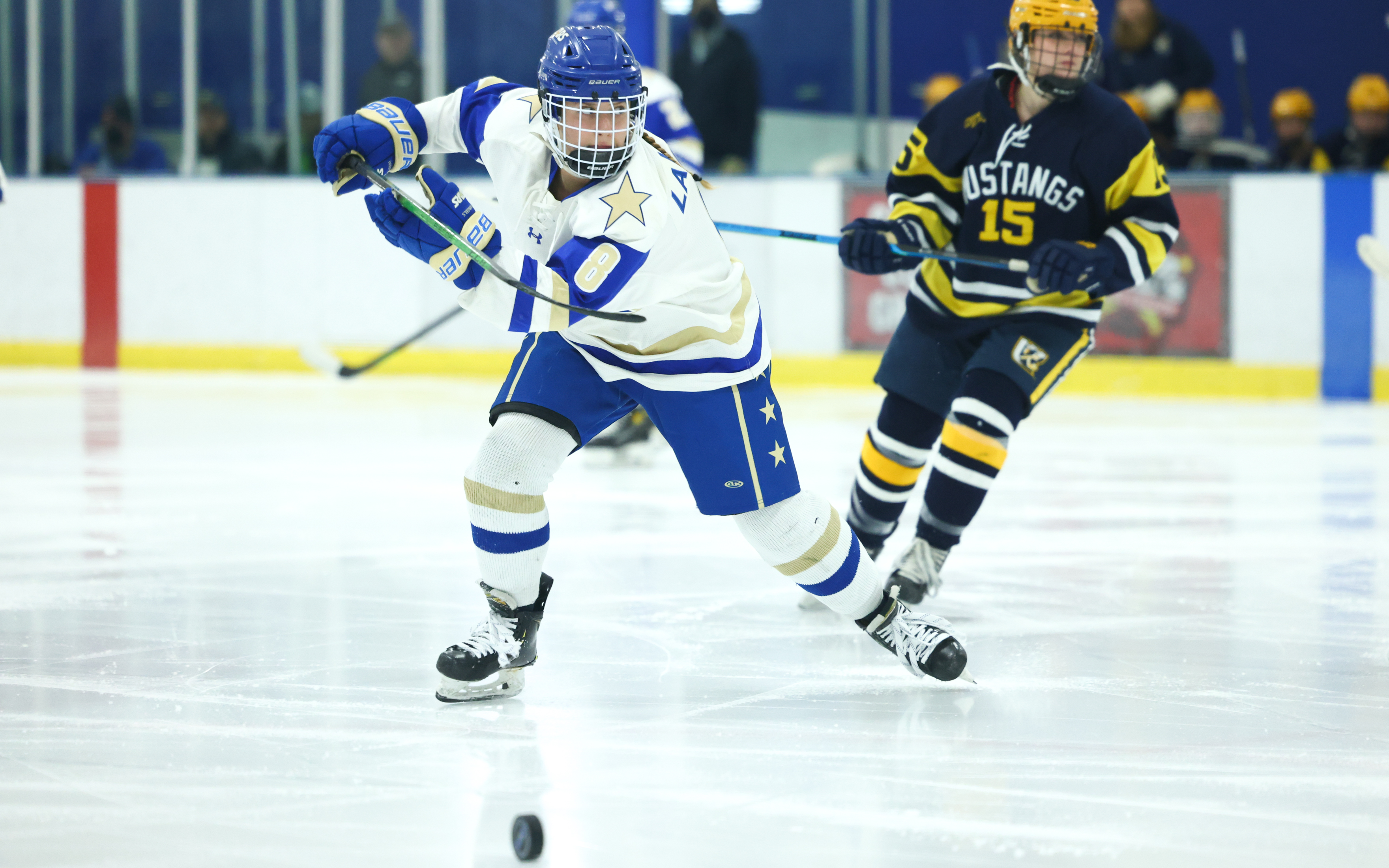 Holy Angels' Bella LaMere chases a loose puck during the first period of Tuesday night’s Class 1A, Section 5 semifinal game against Breck. LaMere had a goal and three assists in the Stars’ 5-1 victory over the Mustangs. Photo by Jeff Lawler, SportsEngine

Holy Angels extended its winning streak to seven games and earned a trip to the Class 1A, Section 5 Championship game after a 5-1 victory against Breck on Tuesday at Richfield Ice Arena.

The Mustangs’ Sarah Peterson made 49 saves — her second-highest saves total this season and 10th time this season facing 40 or more saves — as senior Payton Berman scored the Mustangs’ lone goal.

The Mustangs were the No. 6 seed in the section and after a 2-19-1 regular season, upset No. 3-seeded Mound Westonka last Saturday to make their way to tonight’s contest.

The Stars move on to the Section Championship game this Thursday against No. 1 seeded Orono, who defeated Delano/Rockford 8-1 earlier on Tuesday. 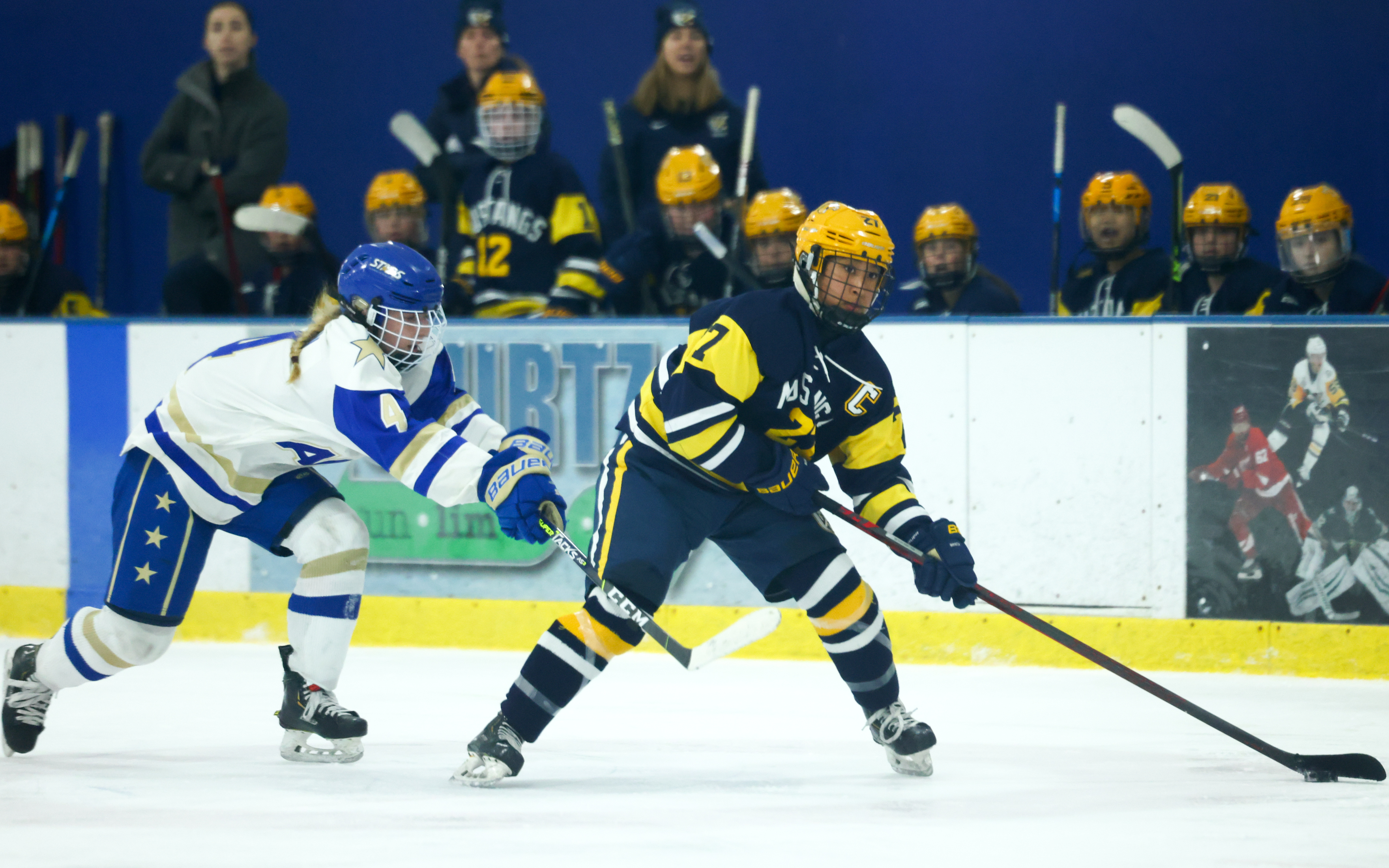 Breck’s Aiko Sims breaks toward the Holy Angels net on a scoring chance Tuesday evening. The Mustangs fell to the Stars 5-1 in Richfield. Photo by Jeff Lawler, SportsEngine