The Spartans took a 2-0 lead five minutes into the game, and the Stars never recovered. 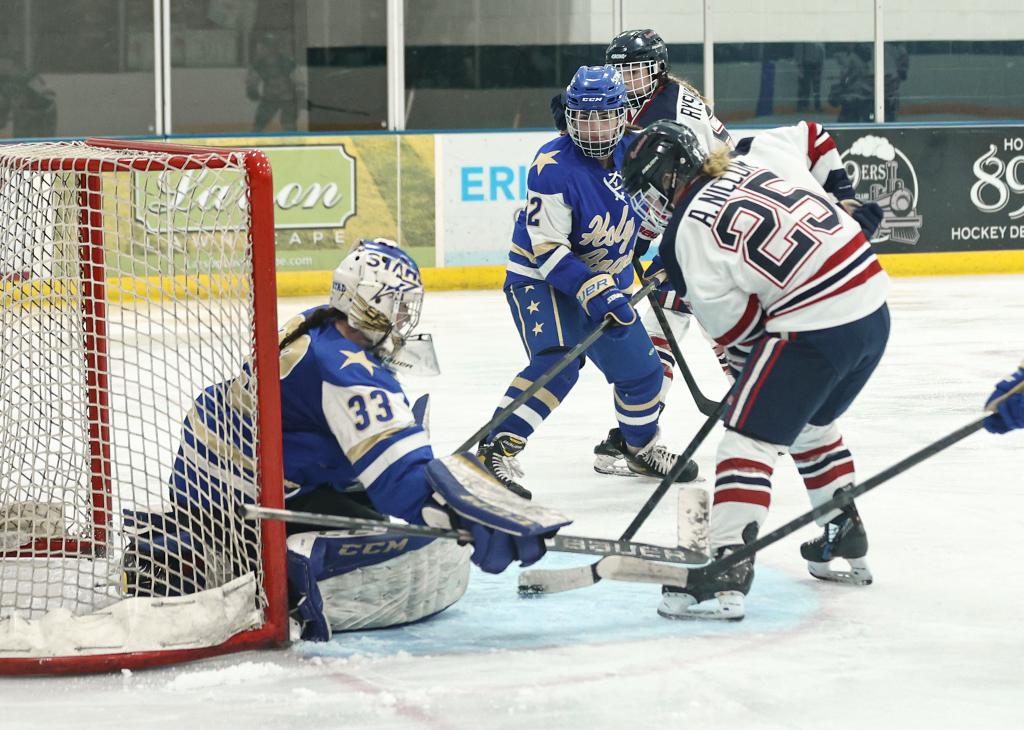 Alexa Niccum (25) scores her second goal of the game giving Orono a 5-1 lead in the third period. The Spartans advance to next weeks Class 1A State Championships at the Xcel Energy Center. Photo by Cheryl A. Myers, SportsEngine

Third time’s the charm for the Orono Spartans.

After finishing as the Class 1A, Section 5 runner-up the past two seasons, Orono girls’ hockey celebrated its first section championship with a 5-1 victory over Academy of Holy Angels on Thursday at Orono Township Ice Arena.

“For me, it’s surreal,” said Orono senior Iyla Ryskamp, who bumped her season points total to 83 on Thursday. “This is my fourth section final, and it’s crazy to come out on the other side. 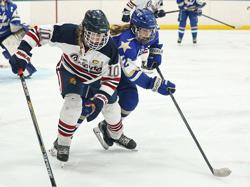 “I’m just so excited to see what we’ve been talking about all season come to life.”

Orono was a No. 3-seed in the section tournament the past two seasons, losing 6-2 to eventual state champion Breck in 2020 and falling 3-2 in overtime last year to Chisago Lakes.

“The last couple years we’ve had a couple heartbreaks,” Orono coach Sean Fish said. “And so this is really nice for our girls. They deserve everything that they got. An unbelievable year, ending it in the section final is huge.”

Orono (24-3-0), the top seed in the section and ranked No. 2 in the Class 1A coaches’ poll, knew all season that reaching its first state tournament was a possibility. It was more than a goal the Spartans wanted to make sure they achieved on their way to what they hope will be a state title, too.

Facing conference and section foe Holy Angels for the third time this season, Orono took control of the game early. It didn’t let the second-seeded Stars, ranked No. 4 in Class 1A, get going offensively, either.

Orono possessed the puck for the first few minutes before sophomore Alexa Niccum scored four minutes in with the first of her two goals on the night. She pounced on a rebound from freshman defender Alex Paulsen’s point shot.

“It was great skating back to the bench and seeing the coaches all excited and my team all excited,” Alexa Niccum said.

Then only 1 minute, 13 seconds later, the Spartans doubled their lead when Ms. Hockey semifinalist, Ryskamp, lit the lamp for the 42nd time this season.

The Spartans killed some 5-on-3 time for the Stars and kept the Stars from generating many early chances. Orono went into the first intermission with a two-goal lead and a 16-6 shot advantage.

The Stars (22-5-1) got within two goals later in the second period when sophomore Ava Dean cut the deficit to 3-1 with a quick turnaround shot on the power play. But a couple of minutes later, the Orono lead was back to a three-goal margin when Zoe Lopez scored on a rebound late in the second period.

“If you look top to bottom on Orono’s team, they’re fast,” Holy Angels coach Ryan LaMere said. “They run an excellent system, and there wasn’t a lot of time and space. It made it difficult, our transition game, to get up the ice.”

Alexa Niccum bookended the scoring on the night when she made it 5-1 five minutes into the third period.

“I’ll give Holy Angels credit,” Fish said. “They’re a tough team to play against, probably one of the toughest teams that we’ve played all year long. But our girls came out ready to go right from the start tonight. They wanted this.”

The Spartans led from the four-minute mark of the first period and never really let the Stars get close, outshooting them 35-19 for the game. Still, Ryskamp said she got excited in the final two minutes, though she and her teammates tried to stay even-keeled throughout the game. Ryskamp finished with a goal, two assists and plenty of other scoring chances that were close to connecting, too. Ryskamp, a Sacred Heart University commit, leads her team with 42 goals and 41 assists this season.

“She’s been a rock for us obviously with all the points she’s had,” Fish said. “But she does more than that. She plays a 200-foot game. She gets up and down the ice.

“She’s not just a one-way player when she’s getting points down here. She plays at all ends of the ice.”

For Kailey Niccum, this wasn’t the first time she was part of a section championship team. She was a freshman with Mound Westonka when it won the Class 1A, Section 2 title in the 2018-19 season. That feeling of winning a section final never goes away, Kailey said.

“I think with 40 seconds left, I walked over to Iyla and we were both just so emotional,” Kailey said. “You’re like, This is actually happening?’ ” 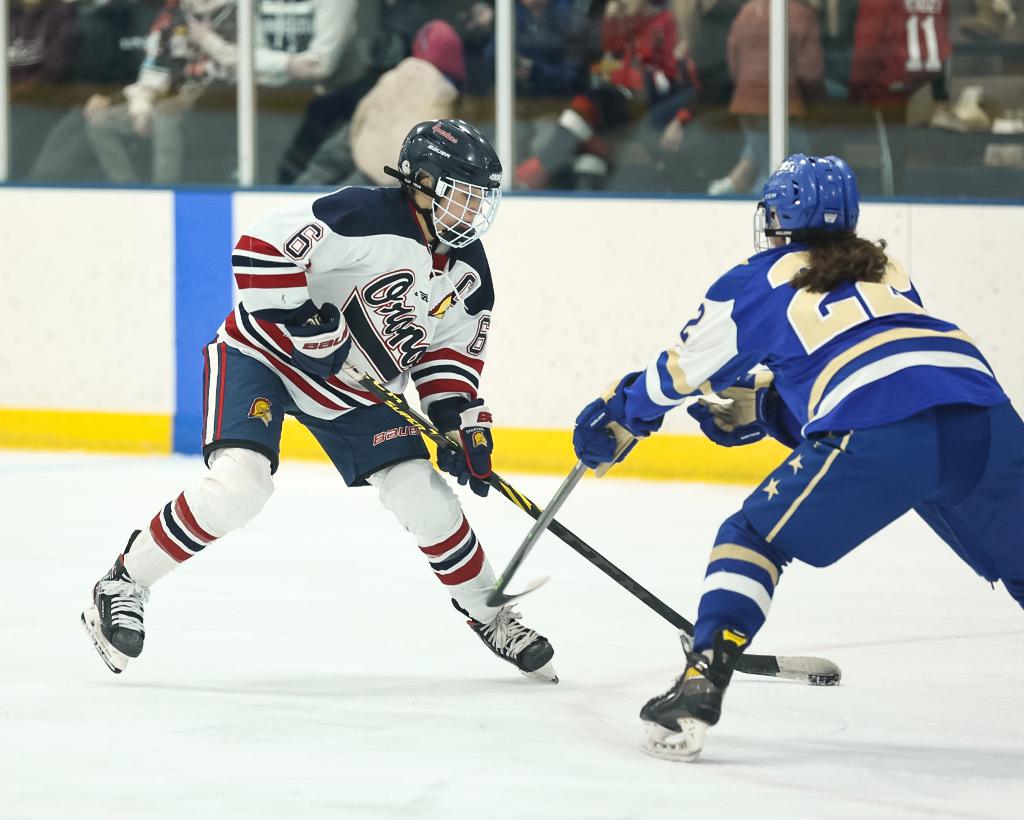 Third time’s the charm for the Orono Spartans.

After finishing as the Class 1A, Section 5 runner-up the past two seasons, Orono girls’ hockey celebrated its first section championship with a 5-1 victory over Academy of Holy Angels on Thursday at Orono Township Ice Arena.

Orono took a 2-0 lead within a one minute, thirteen second span early in the first period on goals from sophomore Alexa Niccum and Ms. Hockey semifinalist Iyla Ryskamp. Orono went up 3-0 in the second period before the Stars got on the board with a power-play goal.

Niccum scored her second goal of the game for the 5-1 lead in the third period.

In goal, Orono junior Celia Dahl made 18 saves while Holy Angels senior Celeste Rimstad stopped 30 shots. The loss snaps a seven-game winning streak for the Stars (22-5-1); their last loss also coming against Orono (24-3-0), a 6-4 decision on Jan. 20. Orono also swept the season series against the Stars, winning all three meetings between the Metro West Conference foes.

The past two seasons, Orono was a No. 3-seed in the section tournament, losing 6-2 to eventual state champion Breck in 2020 and then falling 3-2 in overtime last year to Chisago Lakes. This will be its first state tournament appearance. 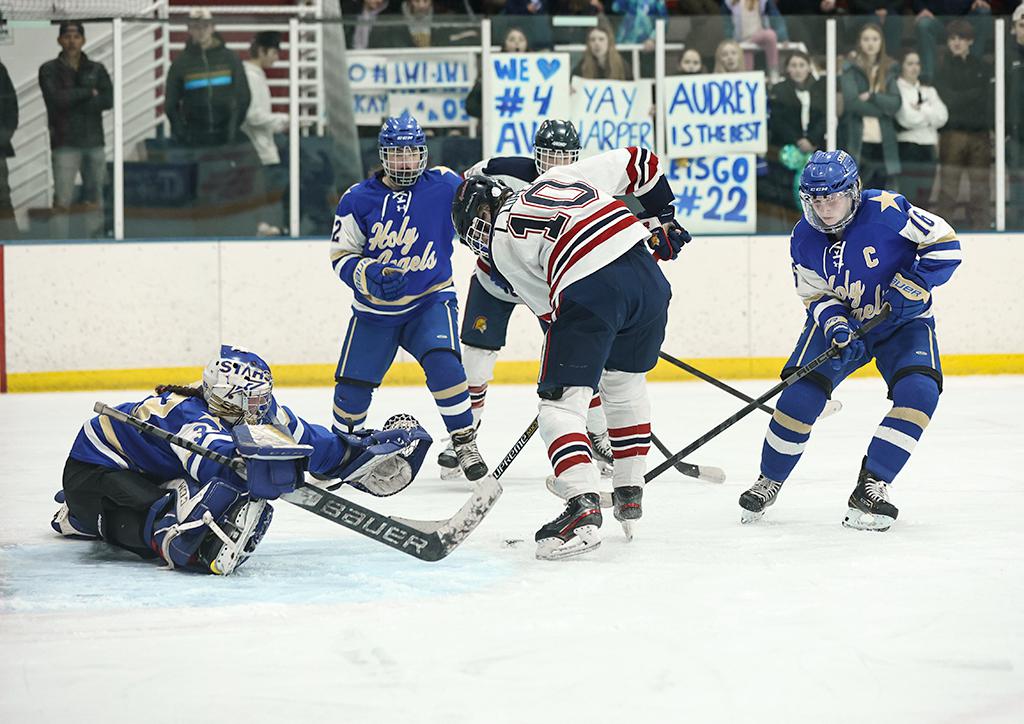 Academy of Holy Angels goaltender Celeste Rimstad stretches to cover the puck at the top of the crease. Rimstad stopped 30 shots in the Class 1A, Section 5 final. Photo by Cheryl A. Myers, SportsEngine