The Hornets' two-goal lead heading into the third period was just enough to beat the Red Knights on Friday. 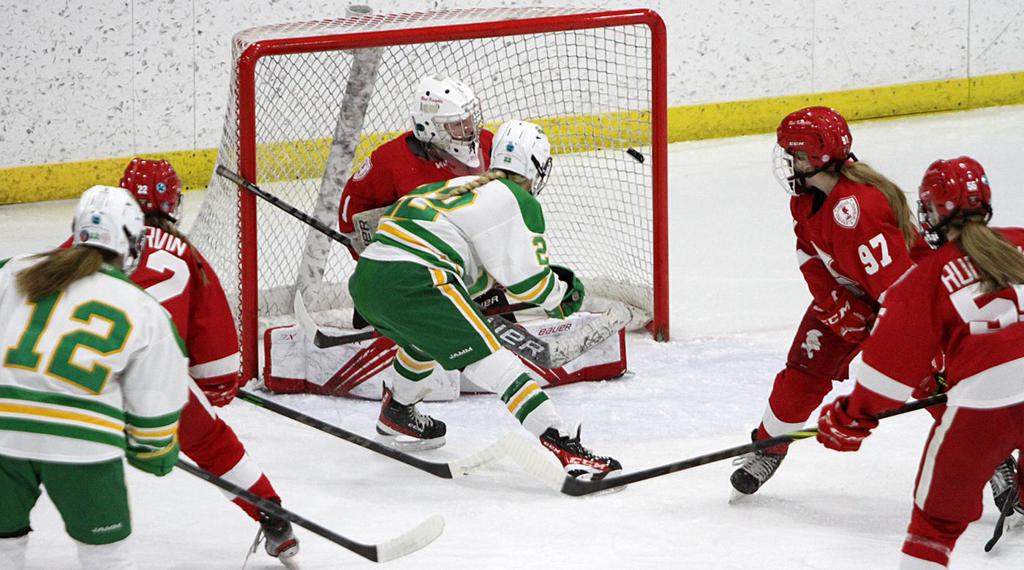 There are a lot of expectations that come with wearing an Edina sweater.

The Hornets have played in the past five Class 2A state title games, winning four of them. They’re coming off a perfect 22-0 season.

Making the state tournament seems like a routine for this program. But the on-ice celebrations showed what an accomplishment their 4-1 win over Benilde-St. Margaret’s in the Class 2A, Section 6 championship is. 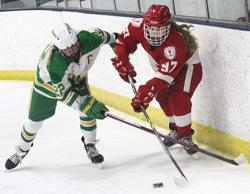 “We’ve had some success the last couple years but you never know what’s going through these high schoolers’ heads. I love them so much, each and every one of them,” Edina coach Sami Reber said.

After the team received their medals and section championship trophy, all of the Hornets (25-2-0, 9-0-0) huddled around their coach and started chanting “SA-MI, SA-MI!”.

“To feel that it’s reciprocated even though times are sometimes hard and I have to be tough on them, it just shows that we’re a family and we’re one team.”

The Hornets were on full display as a team tonight, as they outplayed the Red Knights (20-6-2, 8-0-0) in almost every way. They doubled their opponent’s shot attempts. They won significantly more faceoffs. And the final score reflected that.

After the Red Knights had the Hornets on their heels early in the game, Vivian Jungels opened the scoring with a backhanded shot. She played a give-and-go with Lorelai Nelson that was as smooth as anything you might have seen in Beijing the last couple weeks.

“Lorelai is really good with give-and-go passes and she’s the youngest player on our team, so for her to be able to do that in a big game like this is fun to watch,” Jungels said.

Lauren Zawoyski doubled Edina’s lead in the second period. Emma Peschel scored for the Red Knights to make it 2-1 with over 10 minutes left in the third period. It seemed like a nervy finish was in the cards, but Edina had other plans.

“The mood changed a little bit, but give us 30 seconds and the energy’s right back,” Reber said. About two minutes later, Jungels had her second goal of the game and the Hornets rode it out from there.

Zawoyski scored an empty-netter in the final seconds, joining Jungels with two goals in the game. While the forwards put on a show, it was the defensive effort that stood out Reber. “Emma Peschel on the [defensive] side for Benilde is a threat every time she’s on the ice. You have to take away her time and space, and if you know the puck is coming off her stick for a shot, you better block it.” she said.

This ends the Red Knights’ season, and while this moment hurts, Benilde-St. Margaret's co-head coach Kevin Gray knows these are positive memories from this season that will last for a while.

“You’re with your kids six days a week the whole time. The memories they have, all the bus rides, the locker rooms, those are the positives at the end, that’s what they remember; the sting will go away.”

Edina will now get ready to play at the Xcel Energy Center next week. But the celebration will last through the weekend.

“We’ll soak it in until Monday. I want these girls to enjoy it, they’ve worked their butts off the entire season. We’ve had the toughest schedule in the state, so day in, day out it’s been a battle with every game,” Reber said. 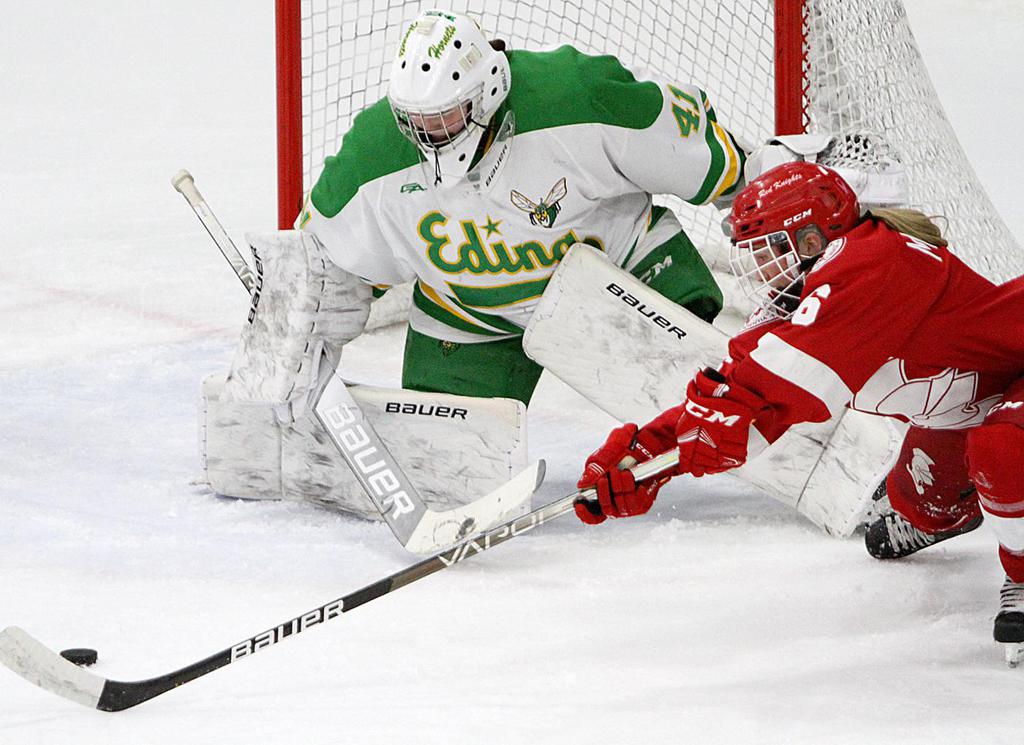 Edina is moving on to the state tournament after defeating Benilde-St. Margaret’s 4-1 in the Class 2A, Section 6 final at Parade Ice Arena on Friday night.

The Hornets (25-2-0, 9-0-0) opened the scoring six minutes into the game with a clean give-and-go executed between Vivian Jungels and Lorelai Nelson. Once Jungels got the puck back she sent a backhanded shot into the top of the net.

After the Hornets peppered Allie Van Stelten throughout the second period, they broke through with four minutes left before intermission. They forced a turnover in the neutral zone and it turned into Lauren Zawoyski sending a wrist shot past Van Stelten.

Their momentum didn’t last long, as Jungels scored her second of the game, a power play goal, two minutes later.

Zawoyski scored an empty-netter to secure the 4-1 victory.

The Hornets outshot the Red Knights 34-17. 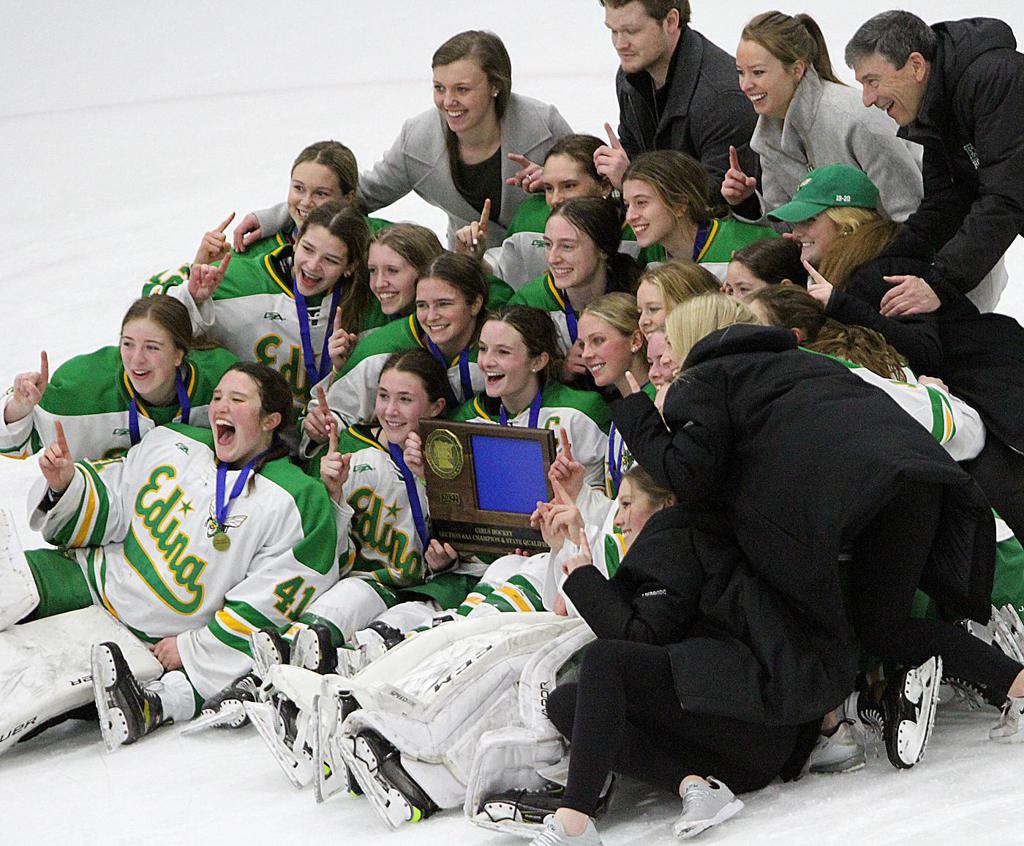