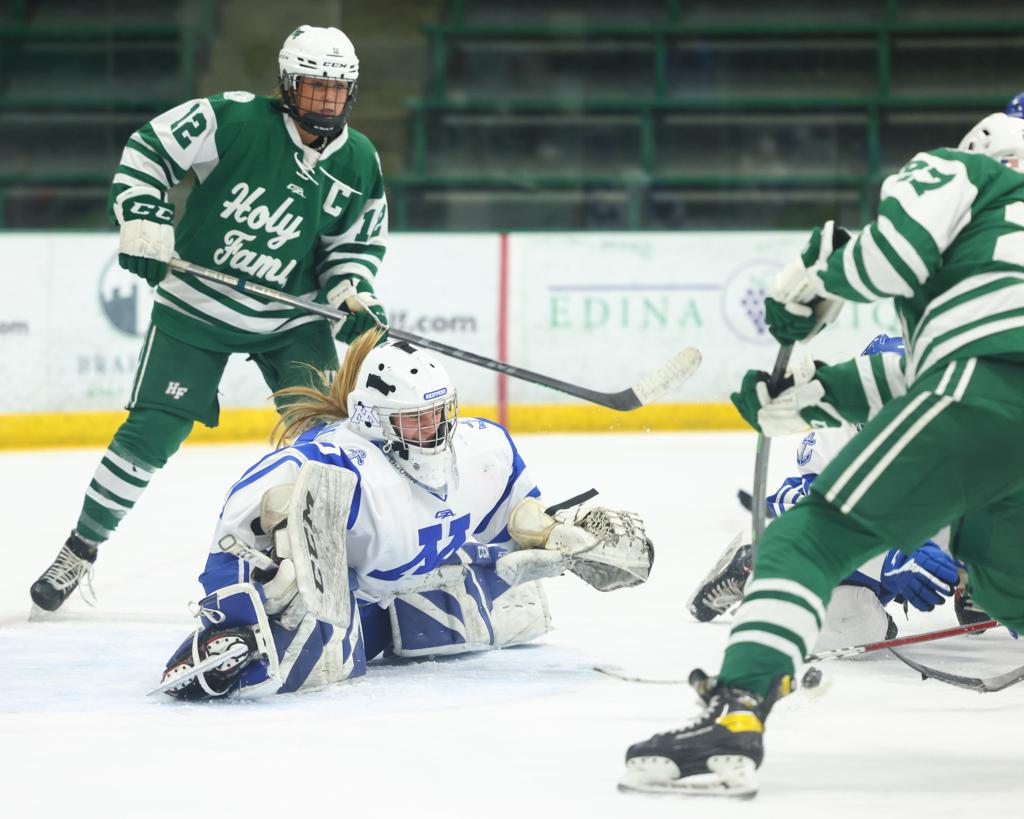 Minnetonka goalie Sophia Johnson stayed low to make a save against Holy Family in the section tournament. (Jeff Lawler, SportsEngine)

Minnetonka’s backup goaltender the past two seasons, senior Sophia Johnson, is ready for her Class 2A state tournament debut between the pipes.

Johnson has already proven herself among the Skippers’ collection of great goalies. She earned 19 of her team’s 22 victories. She boasts a 1.71 goals-against average and has stopped 92% of shots faced. And she posted six shutouts on her way to being named one of the 12 semifinalists for the Let’s Play Hockey Senior Goalie of the Year Award.

Johnson was not included on the list of five award finalists, though team success this week would mean more anyway. Minnetonka’s championship quests the past three seasons ended in the state tournament semifinals, with losses to eventual champions Edina (2019 and 2021) and Andover (2020).

“I’m just so, so excited because I watched Brynn do this for two years and now it’s my turn to show what I’ve been doing behind the scenes and what I can do for this program,” Johnson said.

Junior forward Grace Sadura said: “She comes to practice every day with a smile on her face and trying to get better. She builds her teammates up, and she’s a great part of our team.”

No. 3 seed Minnetonka opens play at 1 p.m. Thursday against Burnsville at the Xcel Energy Center. Skippers coach Tracy Cassano, Minnesota’s career leader in victories by a woman coach with 229, left Burnsville after six seasons to take the Minnetonka job in 2019.

Defending Class 2A champion Edina, the No. 2 seed, has a rematch with top seed and undefeated Andover on its mind. Never mind that the Hornets defeated the Huskies in the championship game last year. A 4-0 loss televised statewide on Hockey Day Minnesota back in January still burns.

“We have more to do after Hockey Day Minnesota,” said Edina senior defender Vivian Jungels, the Star Tribune Metro Player of the Year.

River Lakes head coach Alexis Klatt inspires her players through both words and her continued pursuit of life goals.

In July, she graduated from the U.S. Army Officer Candidate School located at Fort Benning in Georgia. Now Second Lt. Klatt, she used weekend passes to train for, and complete, her first triathlon.

Klatt is a 2014 Eden Valley-Watkins graduate who played for River Lakes. She played Division III hockey at the College of St. Benedict in St. Joseph, MN.

Her Stars qualified for their second consecutive Class 1A state tournament. They face No. 1 seed Warroad at 6 p.m. Wednesday.

Couture, who won 426 games and made seven state tournament appearances, is an assistant coach on the Brainerd/Little Falls staff.

A year ago, he bid an emotional farewell to son Dane, a senior goaltender. This season, Couture helps direct his daughter Kendra, a junior defender. Her first varsity goal stood as the game-winner in a 4-3 victory against Alexandria in the Class 2A, Section 8 semifinals.

These teams have history. In 2019, Brainerd/Little Falls won in overtime of the semifinals. The year before, Andover took an overtime victory in the consolation semifinals.

Orono makes its Class 1A state tournament debut, but players wondering what to expect have a teammate to consult.

Senior forward Kailey Niccum won a section title in 2018-19 as a freshman with Mound Westonka. She had a goal and an assist in the state tournament quarterfinal as the White Hawks took fourth.

The quarterfinals Wednesday and Thursday will be available to stream free from prepspotlight.tv. Semifinals Friday and finals Saturday will be broadcast by Ch. 45.