Warroad states its case pointedly, runs away with Class 1A state championship

The Warriors piled up goals against Proctor/Hermantown and won their first title since 2011. 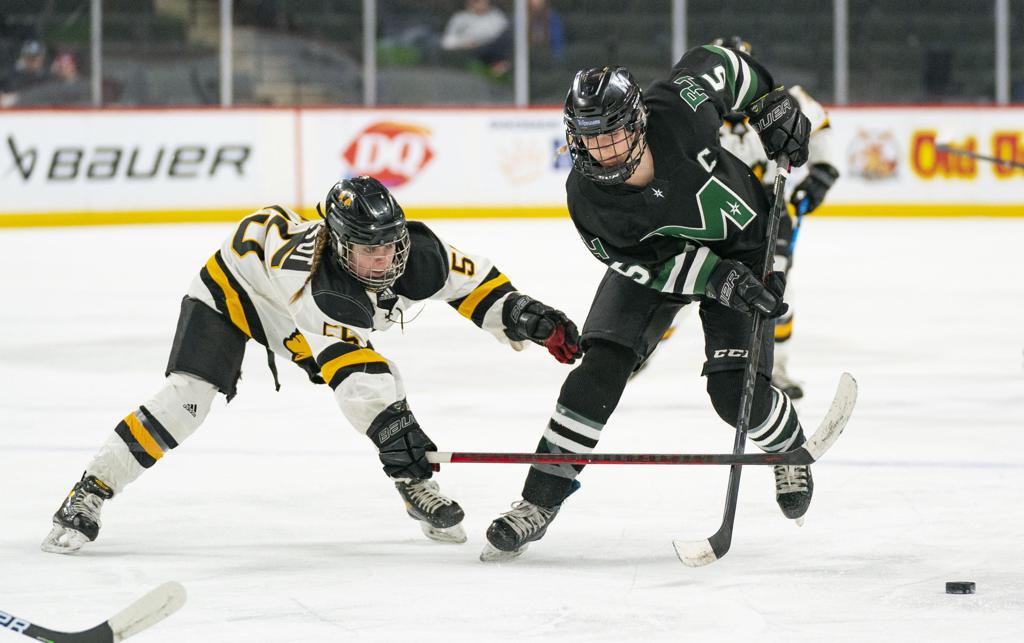 Top-seeded Warroad scored four second-period goals on the way to a 6-1 victory over defending state champion Proctor/Hermantown in the all-northern Minnesota final at Xcel Energy Center.

Warroad coach David Marvin won titles in 2010 and 2011, when daughters Layla and Lisa skated on the team. Layla is now an assistant coach.

“Well, it’s not about me. It never has been,” Marvin said, as tears welled in his eyes. “But it’s kind of cool to win one without my kids.

“We’ve been really close, and so, I can’t say it never affected me. I wanted these guys to win over time.”

Down 1-0 less than three minutes into the game, Warroad was down on the scoreboard at the first intermission. But the Warriors fought back in the second, tying the game at the 3:02 mark on Talya Hendrickson’s 35th goal of the season. Madison Lavergne scored the go-ahead goal a couple of minutes later. Then Warroad finished off the middle period with a pair of power-play goals from Kate Johnson, giving her 48 goals on the season.

For the second day in a row, Warroad had a four-goal period. Scoring in bunches was pretty common for this team.

“Usually we just build off of that momentum, and we can keep it going the rest of the game,” Hendrickson said. “Just depends on the period we decide to start in.”

Lavergne’s second goal of the game, 40 seconds into the third period, extended the lead. Lila Lanctot scored her fifth of the tournament with 11:09 to play.

Junior Abby Chamernick assisted on three of the second-period tallies. Warroad went 2-for-2 on the power play. It outscored opponents 18-1 in its three state tournament games. The state-championship-winning feeling is the “best thing that’s happened to me in a couple years,” Hendrickson said.

The Warriors (26-3-1) finish with their third state title in 13 tournament trips. They went undefeated against Class 1A opponents this season.

Junior Nya Sieger scored for third seed Proctor/Hermantown (21-8-1) in the first period, her 21st of the season. But the Mirage fell to 0-5 this season when allowing three or more goals. The first intermission break shifted momentum away from the Mirage, and the team didn’t play well in the second, said coach Emma Stauber.

“I think the main thing was our energy,” Mirage senior Rylee Gilbertson said. “It wasn’t there as much as it was the rest of the tournament.

“Once we got in that hole, we needed to respond, but we just couldn’t in the second period.”

2. Abby Chamernick, Warroad junior: She tied her season high with three assists and finished the season with 31.

3. Madison Lavergne, Warroad senior: Fresh off a four-point performance in the semifinals, she scored two goals in the championship game.

1
Saturday’s final pitting Proctor/Hermantown and Warroad marked the first time in Class 1A that two teams from northern Minnesota played for the state title.

4
Goals in a period, a winning formula. Warroad dropped a four-spot on Proctor/Hermantown in the second period of the title game. In Friday’s semifinals, the Mirage and Class 2A top seed Andover scored four times in a period.

Years since Warroad last won a Class 1A state championship. In eight trips to state between 2011 and 2021, the Warriors endured four third-place finishes and placed second on three different occasions. A year ago, Proctor/Hermantown defeated Warroad in the semifinals, but there was not a consolation bracket.