The Huskies justified their early-season No. 1 ranking by beating the Hornets 3-0 on Saturday. 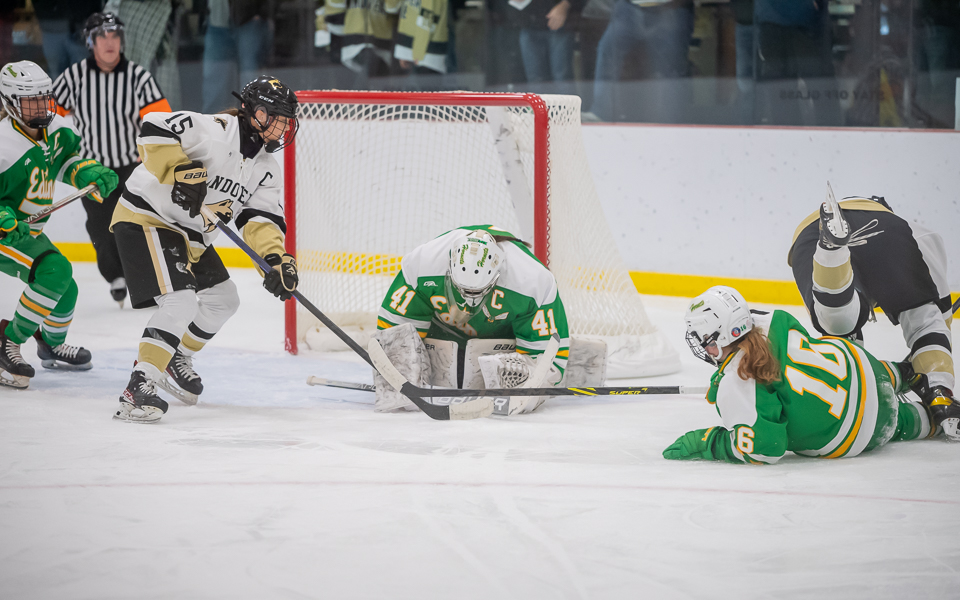 Andover sophomore defenseman Courtney Little skated the puck up ice during a second-period power play. Having sophomore forward Hannah Christenson skating with her, Little was patient. Deep in the Edina zone, the patience paid off with a slick, cross-ice pass over to Christenson for the goalmouth tap-in.

“I did not know how that went across,” Boerger said. “I do not know how she did that or saw that, but it was incredible.”

Little could tell the Edina defense was more focused on her carrying the puck. She spotted Christenson.

“I just saw her rushing to the net, so I passed it over,” Little said. “I thought that was the best decision.”

That goal was the last of the scoring in a 3-0 Huskies victory Saturday afternoon at the Andover Community Center arena as Andover capitalized with two power-play goals to finish with its second shutout win in as many games to start the girls’ hockey season. 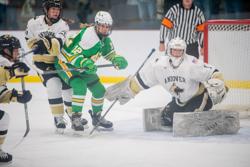 The bang-bang pass play from Little worked out well. And it’s not the first time she’s contributed offensively.

“We always focus on our defensemen playing sound, defensive play,” said Andover coach Melissa Volk. “So it’s fun when she can go and lead the rush and make a good play. She did that the other day (in the season opener), too.”

Boerger got the scoring started Saturday with a breakaway goal in the first five minutes of play. Little also assisted on that goal, giving her a team-leading four helpers and five points two games into the year. Little finished her freshman season with 5 goals and 20 points.

The Huskies (2-0-0) have already knocked off two teams ranked in the top 10 of Class 2A by a Let’s Play Hockey preseason poll. Edina (0-1-0) is ranked No. 3, and the Huskies also shut out Benilde-St. Margaret’s, ranked No. 10, on Thursday to open their season.

In goal, senior Courtney Stagman made 35 saves for her second shutout, and her second consecutive shutout against Edina. She made 24 saves in the 4-0 victory against Edina in last January’s outdoor contest at Minnesota State Mankato as part of Hockey Day Minnesota. She knows these games against talented teams like Edina are a chance where she can step up for her team.

“They always have my back, so I’m going to have theirs,” Stagman said.

In a game with 18 penalties, it didn’t leave a lot of room for much 5-on-5 hockey between two of the state’s top teams. Defense and goaltenders found themselves in a lot of special teams play.

“No team wants to be on a power play, penalty kill the entire game,” said Edina coach Sami Cowger. “It ruins the flow for everyone. This early in the season, it’s a lot of back-and-forth in general, so just let them play as much as we possibly can.”

One of Edina’s best scoring chances came early in the second period when Stagman slid across the crease to stop Edina freshman Cate McCoy from cashing in on a second-chance opportunity.

“The rebounds were there though,” Cowger said. “So that’s something we’ve got to work on.”

Andover plans to work on play in its own end, Volk said. The Huskies are coming off a perfect 30-0, Class 2A championship season. Of their 162 goals and 399 points on last season’s roster, the Huskies only graduated about 12% of its scoring with four forwards, led by Sara Kaiser’s 11 goals and 23 points.

“Especially last year, (it) was kind of an unknown, we had so many young kids,” Volk said. “We still have so many young kids, but they have a year of experience under their belt. So it’s going to be fun to see them more as returners and fill some different roles out there.”

The Huskies have been a dominant force in girls’ hockey, and it looks to continue. They’re 82-3 since the start of the 2019-20 season. Their last loss was to Edina in the 2021 Class 2A championship game at Xcel Energy Center. Their last regular-season loss was a 1-0 decision against Hill-Murray on Jan. 29, 2020, coming in the second-to-last game before they swept the postseason for their first state title. 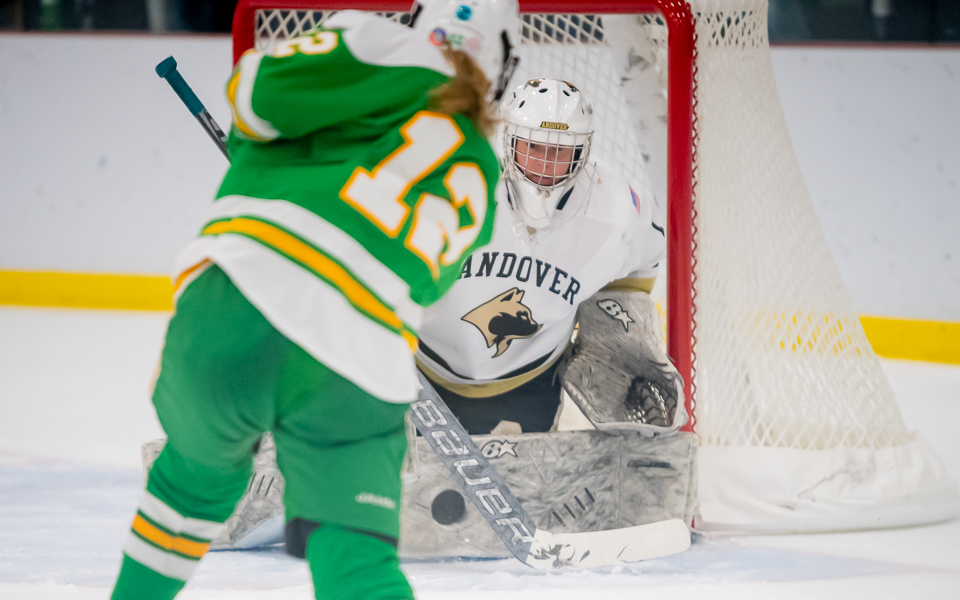 Goalie Courtney Stagman of Andover gets a shutout Saturday afternoon against Edina. Stagman stopped 35 shots on goal in the Huskies 3-0 win over the Hornet’s. Photo by Earl J. Ebensteiner, SportsEngine

The Huskies scored early and then used a pair of power-play goals to defeat Edina 3-0 Saturday afternoon at the Andover Community Center arena.

Senior center Ella Boerger got the scoring started with a breakaway goal in the first five minutes to set the tone. Sophomore defenseman Courtney Little had a pair of assists, while the defense and senior goaltender Courtney Stagman also kept Edina off the board through two periods.

Two games into its season and the Huskies (2-0-0) have already knocked off two teams ranked in the top 10 of Class 2A by a Let’s Play Hockey preseason poll. Edina (0-1-0) is ranked No. 3, and the Huskies also shut out Benilde-St. Margaret’s, ranked No. 10, on Thursday to open their season.

Coming off a perfect 30-0, Class 2A championship season, Andover improves to an 82-3 overall record going back to the start of the 2019-20 season. 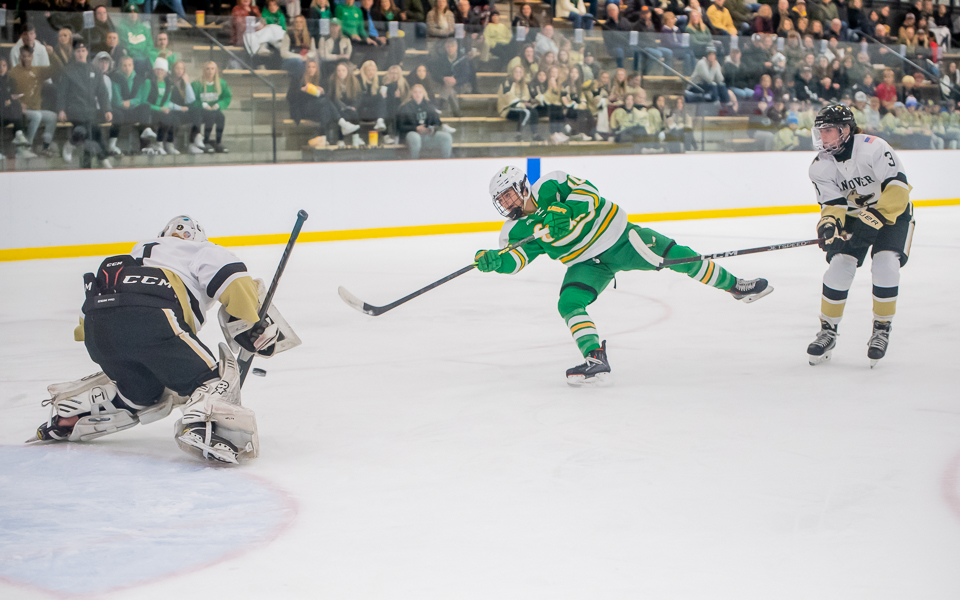 Edina’s Hannah Halverson gets a shot on goal in the second period. The Hornets lost to the Huskies 3-0 at the Andover Arena Saturday afternoon. Photo by Earl J. Ebensteiner, SportsEngine