The Crimson exploded for six goals when visiting the Bears on Tuesday. 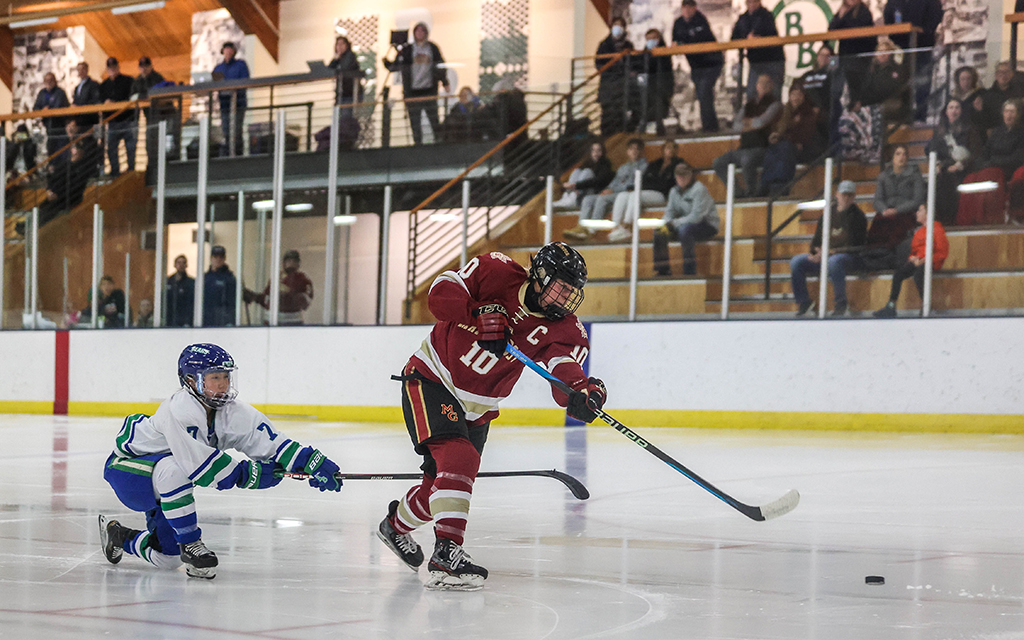 Stella Retrum (10) shoots for Maple Grove, scoring a goal for the Crimson in the second period. Photo by Brennan Schachtner, SportsEngine

Maple Grove top-line forwards Stella Retrum and Bella Shipley set a goal for themselves this season, something a little less obvious than win a state championship, which is no doubt on the table, too.

“Me and Bella decided that we want to break the school record for most shorthanded goals in a season,” Retrum said. “So we’re starting with one.”

That one came only 52 seconds into the second period in their third game of the season Tuesday night at Blake School Ice Arena. In a 1-1 game with the Crimson on the penalty kill for a full two minutes to start the middle period, Shipley, a junior committed to Minnesota State Mankato, chipped the puck out of the defensive zone to a streaking Retrum at center ice. 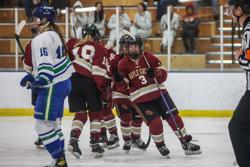 “That works a lot on our shorthanded goals,” Shipley said. “On the fly, because the [defeders] aren’t really looking to play defense, since they’re on a power play. And the other one (Retrum or Shipley) just breaks through.”

Retrum bookended the four-goal second period Tuesday with a goal in front of the crease later in the period. As the team’s leading scorer last season with 35 goals and 61 points, Retrum is setting the tone again with five goals and nine points in three games.

Paired with sophomore center Kelsey Olson, Retrum and Shipley, who scored a power-play goal in the third period for her third tally of the season, are doing everything their coaching staff expects to see out of two Division-I commits.

“And more,” said Maple Grove coach Jim Koltes. “They are so talented. We get a front row seat every night to watch them.

“But they’re grounded kids, too. You don’t see big egos out of them.”

“She thinks she can get them,” Koltes said. “We’ve told her, ‘don’t be flying the zone.’ That’s one of her goals is to get more shorties.

That record aside, Koltes and the Crimson are very excited about the start they’ve had to this young season, defeating Centennial/Spring Lake Park, Wayzata and Blake and outscoring them by a combined 14-2, “three quality programs in the state,” Koltes said.

Their momentum carried into the game against Blake, despite going down 1-0 before Maple Grove’s Pim Wilhelmy tied the game in the final minute of the first period. Blake had the lead on a power-play goal from senior defenseman Jackie Wethington. But the Bears were also still without senior Ellie Morrison, who’s been out injured to start the season.

“Ellie brings a lot of compete every day,” said Blake coach Kristi King. “And I think we’re definitely missing that. But it gives other kids an opportunity to step up.”

The Crimson talked in the first intermission about picking up the pace since they started out slow and the first “wasn’t our best hockey,” Shipley said. Ella Olson scored on the power play, and by the 6:08 mark of the second period, Maple Grove was in control with a 4-1 lead – off Grace Erickson’s stick this time – that resulted in a Blake goaltending change. The Crimson got a 34-save effort from junior Dani Strom, and she came up with some big saves to keep Blake off the board in the second period.

Special teams was huge for Maple Grove, going 2-for-2 on the power play to go along with Retrum’s shorty. Those were the first two full power plays the Crimson saw this season, and they’ve worked hard on the advantage in practice, Koltes said.

“So as coaches, it was nice to see that they were doing the things we were asking them to do and were looking to try to score, and they put the puck there,” Koltes said. 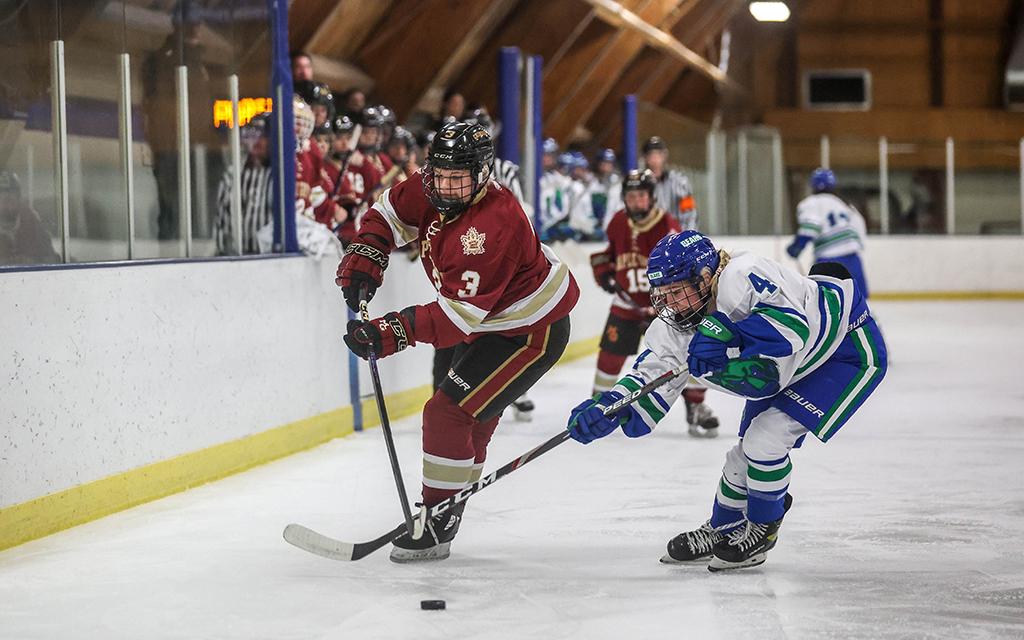 Ella Olson (3) of Maple Grove, fights for possession of the puck with Blake's Remy Abraham (4) in the Crimson's zone. Photo by Brennan Schachtner, SportsEngine

Blake scored first, but once Maple Grove’s Pim Wilhelmy tied the game in the final minute of the first period, the floodgates opened.

The Crimson (3-0), ranked No. 5 in the Class 2A coaches' poll, scored four second-period goals on their way to a 6-1 victory over No. 8-1A Blake on Tuesday night at Blake School Ice Arena. Three of the Crimson goals came off special-teams play, going 2-for-2 on the power play after a shorthanded goal.

Maple Grove senior Stella Retrum bookended the second period with goals, first with a shorthanded breakaway 52 seconds into the middle frame, and then grabbing a bouncing puck on the side of the crease with under six minutes left in the period.

The two teams last met on a Tuesday evening one year ago at Maple Grove, with similar results. The Crimson won that matchup 6-2, with a three-goal second period and a pair of empty-netters. Retrum also scored a pair of goals – including one shorthanded – that night.

In goal, Maple Grove junior Dani Strom made 34 saves. The first-period goal to give Blake a 1-0 lead was the first goal Strom surrendered in the first three games this season. For the Bears (2-3), senior Abby Ziehl started in net, allowing the first four Maple Grove goals and made 11 saves. Once it was 4-1 in the second period, freshman Janie McGawn played the rest of the way and allowing two goals and making 12 saves. 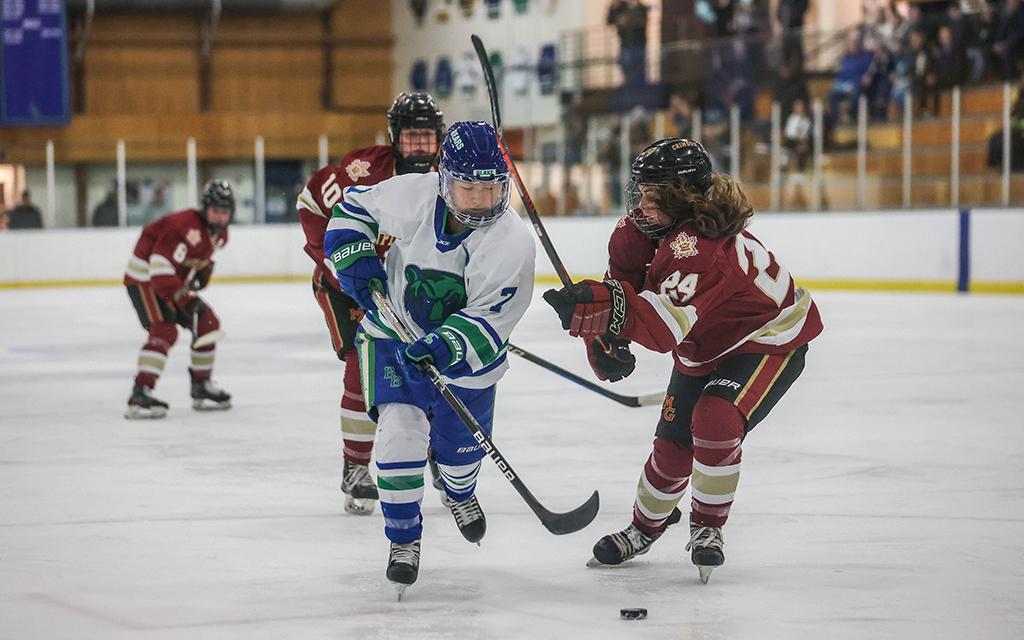 Suzy Higuchi (7) battles for the puck for Blake in the first period. Photo by Brennan Schachtner, SportsEngine