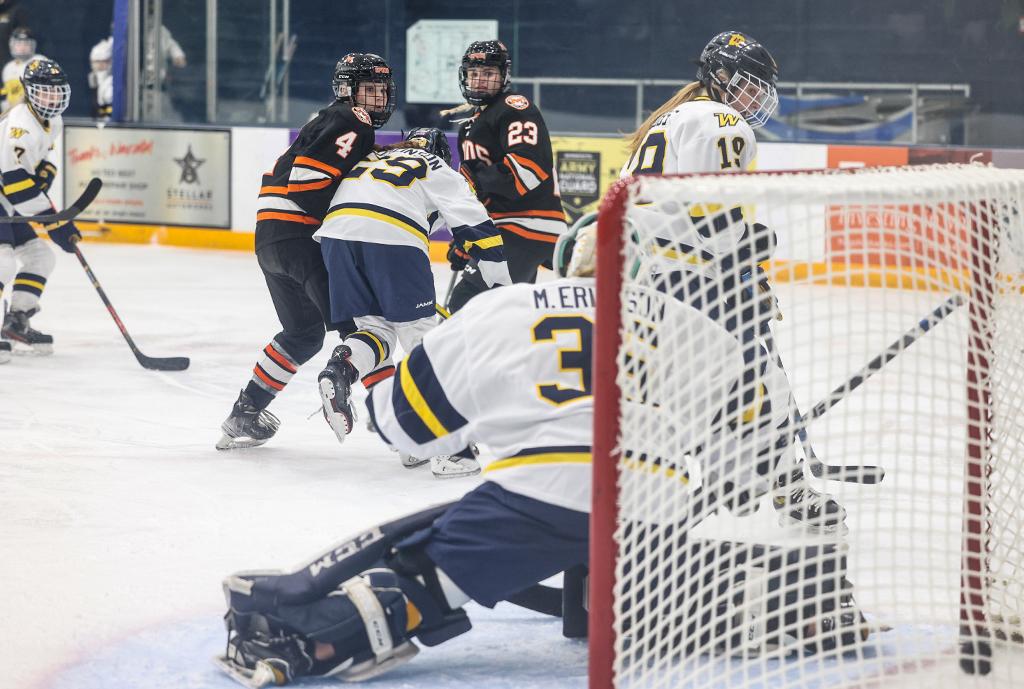 Bria Holm (4) watches her shot find the back of the net. Holm added another goal and an assist, breaking the 100-point mark for career points during an 8-1 win over Wayzata. Photo by Cheryl A. Myers, SportsEngine

That seems to be a theme for Moorhead girls’ hockey, as referenced by senior captain Bria Holm and coach Ryan Kraft.

It’s certainly playing out on the ice for the Spuds offensively this season, with the latest piece of evidence being an 8-1 victory over Wayzata on Friday night at the Plymouth Ice Center.

The Spuds, ranked No. 12 in the Class 2A Let’s Play Hockey coaches’ poll, received goal scoring from seven different players and had 11 players register a point. The No. 17-2A Trojans have lost four straight games, all to teams ranked in the top-20 of Class 2A. 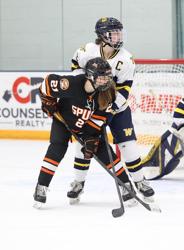 Bria Holm bookended the scoring as part of her three-point night.

“We always talk about having that hunter’s mentality,” Holm said. “We’re kind of that go-getter team.”

Through five games this season, the Spuds are putting up 5.20 goals per game on average. They’ve outscored opponents 26-8.

Last year at the same mark? The Spuds had 10 total goals and a 2-3 record.

“We just couldn’t seem to ever really break that barrier,” Kraft said, who added that he wants his players to compete and go after the puck when they get the opportunity. “I want them to focus on executing. I think that’s the one thing we’re going to keep working on every day all year long, is just execute.”

Kraft called Friday’s game against Wayzata “by far, our best period of hockey of the year.”

Part of that success was scoring three shorthanded goals to bring their season total to four through five games. That total matches the number of shorties they scored all of last season.

“It’s actually kind of funny,” said junior forward Taylor Brueske. “This year, we’ve heard from a lot of people that we play better 4-on-5 than 5-on-5.”

Senior Elle Lebahn scored the first shorthanded goal in the first period, following her own rebound to the opposite circle for a second-chance shot and a 2-0 lead. Only 12 seconds later, Brueske made it 3-0 with her shorthanded goal. She credited her linemate Annie Krieg for getting the puck to the high slot quickly. Brueske finished the night with a pair of assists as well.

“I think the shorthanded goals kind of got the ball rolling tonight,” Brueske said. “Definitely shifted momentum there.”

It did indeed. The Spuds went into the locker room after the first 17 minutes holding a 5-0 cushion against the Trojans (2-4). Sophomore Olivia Kortan added a goal and freshman Haylee Melquist sent the puck through the five-hole with 51.5 seconds left in the period for her first varsity goal.

The Spuds (4-1) also celebrated another milestone. After Holm’s first goal of the game, her assist on Lebahn’s goal gave her 100 career points. The three-year captain and varsity player since eighth grade finished with a three-point night for 101 career points (54-47—101).

Holm leads the team with six goals this season. She recorded 18 goals and a career-best 40 points as a junior and said she’s hoping to reach 50 points this season.

It’s been a good start for Holm and the Spuds early this season, and Brueske said she can see the confidence and momentum carrying from game to game. Most of the team is also back from last year’s heartbreaking section-final loss to Brainerd/Little Falls. 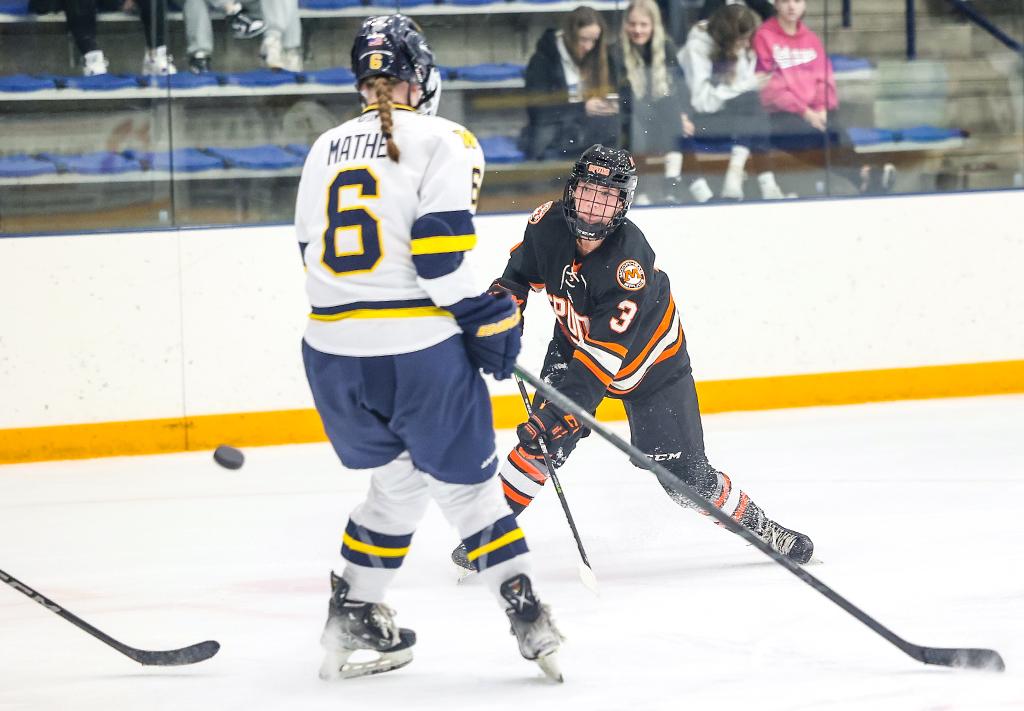 Taylor Brueske (3) scores from the top of the circle giving Moorhead a 3-0 lead in the first period. Brueske added a pair of assists in the 8-1 win over Wayzata. Photo by Cheryl A. Myers, SportsEngine

Moorhead took a 1-0 lead in the middle of the first period, sparking a five-goal explosion before the first 17 minutes were up on the way to an 8-1 victory over Wayzata Friday night at Plymouth Ice Center. The Spuds scored a pair of shorthanded goals within a 12-second span to go up 3-0.

Senior captain Bria Holm bookended the scoring with a pair of goals and an assist as she surpassed 100 career points.

The teams last met in last year’s Walser Invitational around the holidays. Wayzata shut out the Spuds 3-0 in that game with a trio of third-period goals, two coming in the final two minutes of regulation.

Moorhead (4-1), ranked No. 12 in Class 2A by the Let’s Play Hockey coaches’ poll, entered the game averaging 4.50 goals per game. The Spuds have now outscored opponents 26-8 this season. 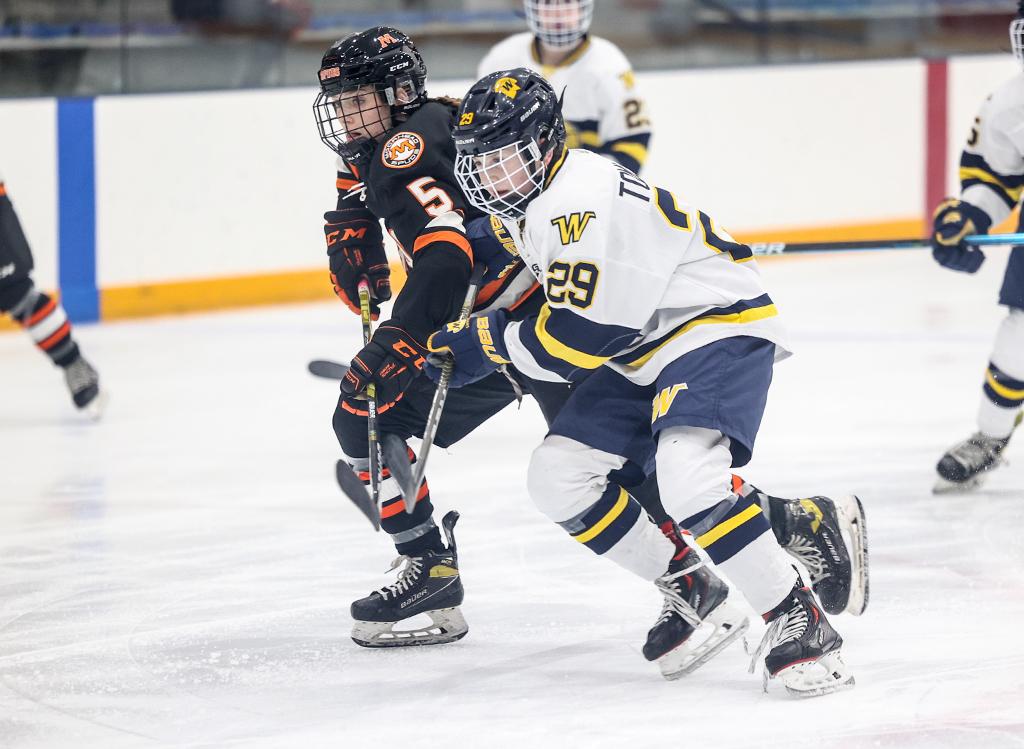 Eighth-grader Maisy Tomlinson (29) chases down a puck alongside Ella Holm (5) in the first period. Tomlinson scored Wayzata's only goal in the closing minute of the game. Photo by Cheryl A. Myers, SportsEngine