The Stars scored early and hung on to the lead to win 2-1. 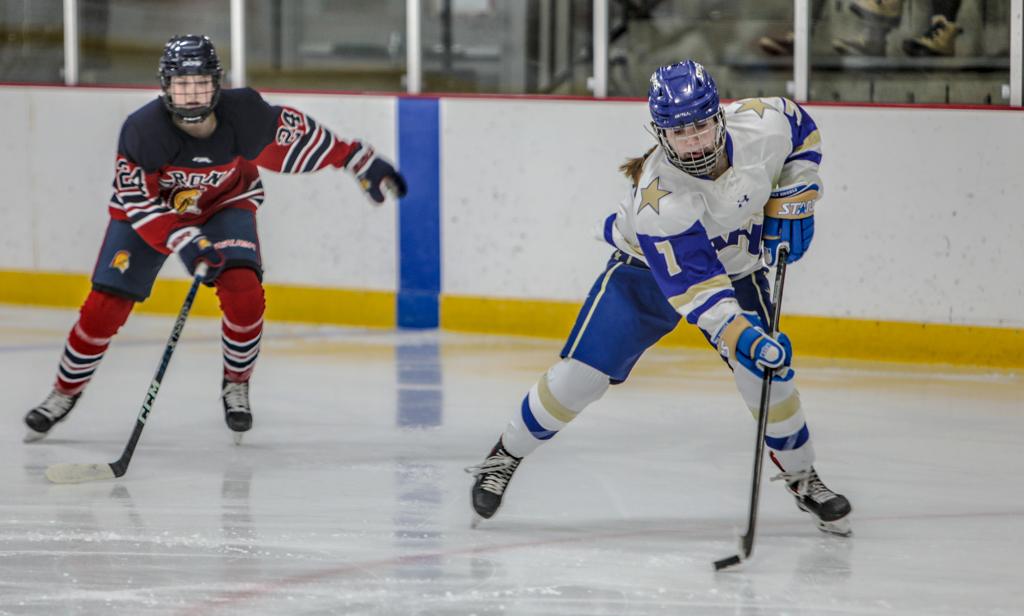 With about two-and-a-half minutes to play in regulation, Holy Angels holding a 2-1 lead, and Orono determined to tie the game with offensive-zone pressure, a Spartans player wound up for a blast of a shot in the high slot.

Stars sophomore defenseman Harper Poehling was in front for the loud block. One of those that sounds like it stings.

“It did a little, but it was worth it,” said Poehling, who blocked other shots on the night, too. “Yeah, I took one to the ankle. It’s just what you’ve got to do.”

Blocking shots and playing tight defense helped Holy Angels, ranked No. 3 in the Class 1A coaches’ poll, defeat No. 4-1A Orono 2-1 on Thursday night at Richfield Ice Arena.

The game was as advertised if you look at rankings, overall records, and the fact that each team came in averaging four goals a game while allowing fewer than two. Holy Angels (8-1-0) and Orono (6-2-2) found themselves entangled in a defensive battle for 51 minutes in a matchup between Class 1A, Section 5 and Metro West Conference rivals. 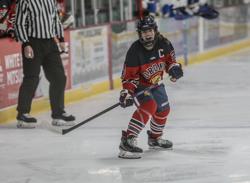 Holy Angels grabbed a 1-0 lead less than two minutes into the game after there was a scramble for the puck in front of the net. With play still alive, the puck squirted out to Stars junior Emilie Anderson, who popped it into the net for the lead and her third goal of the season.

“First shift of the period, we knew we had to buzz,” Anderson said. “There were about 10 rebounds, and I was thinking: ‘If I don’t put this in, then who’s going to?’ I just had to put the puck in the back of the net.”

Each team had a power play opportunity in the second period of the one-goal game. The Stars got their chance first, stopping the momentum of Orono’s jump to start the period. But it was the Spartans who got a shorthanded scoring chance. Orono cycled the puck with the advantage to close out the period but couldn’t get on the board.

Poehling, a three-year varsity player, noted that the Stars focused on moving the puck quickly and with speed. She called the victory “a big momentum booster for the rest of the season.”

Orono pressured to start the third period looking for the equalizer. Right after a close scoring chance, Poehling got a pass from her left wing off the boards. The puck hit off the boards around the Orono defender and Poehling was off to the races for a breakaway. She skated wide to the net “and went bar down” for the 2-0 lead, Poehling said.

“I think that’s the loudest I’ve ever screamed,” Poehling said. “And it was so amazing to have a student section behind us and everyone just cheering around me.”

Orono cashed in on the power play a few minutes later. Sophomore Alex Paulsen buried a puck from the back door to make it 2-1 with 12:16 to play in regulation. The Spartans didn’t let up. They pressed offensively and possessed the puck in the offensive zone. Holy Angels junior goaltender Eva Bentley came up big and received high praise from her coach and teammates after the game after making 26 saves, including “these unreal, cross-ice saves,” as Anderson said.

Stars head coach Ryan LaMere noted a key to keeping Orono’s offense in check was to not stop competing. Their theme for the week—something they didn’t do as well in their 5-1 loss to Warroad last weekend— was winning the small battles in the corner and in front of the net.

“This will to sacrifice and will to win and will to compete is our theme,” LaMere said. “While we got outshot, we were good in front of our net, we got in lanes, we blocked shots, we capitalized on opportunities.”

Orono went with an empty net with a little more than a minute remaining but a couple of late penalties stifled the momentum until the final horn sounded.

In the head-to-head series, the Stars snap a three-game losing skid against the Spartans after losing to them three times last season, including in the Class 1A, Section 5 championship game. LaMere talked before the game about “how the job wasn’t finished,” Anderson said.

The rivalry between these two teams is obvious.

“If anything, it’s a little jump for us in confidence,” LaMere said. “We know we’re likely going to see them again. Any time you win a game like that, tight game…it’s a big win and a big jump in confidence for our team.” 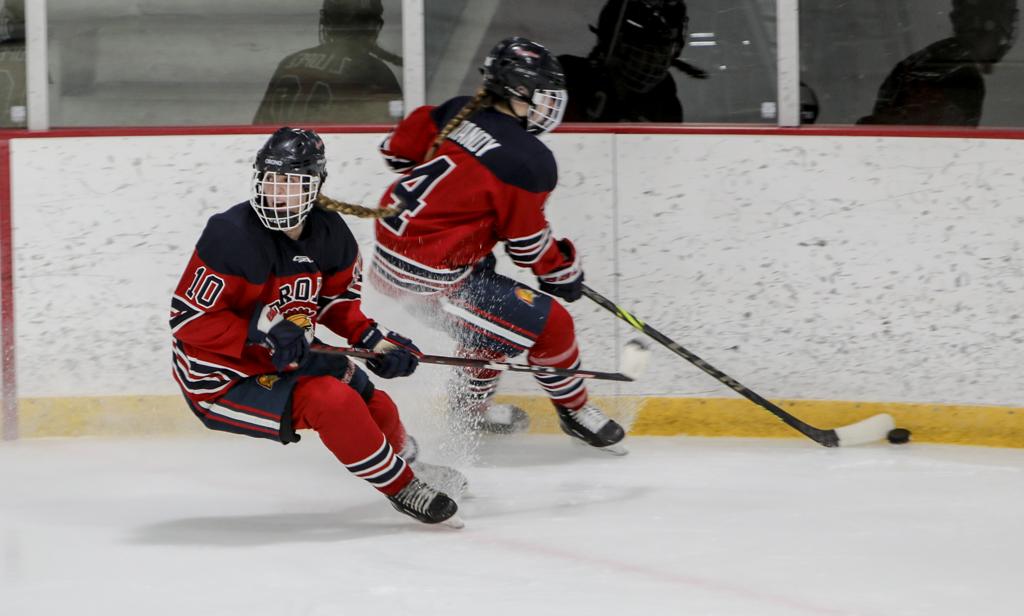 Holy Angels scored a greasy goal in the first two minutes of the game and never surrendered the lead, holding on for a victory over Orono. The Stars, ranked No. 3 in the Class 1A coaches’ poll, defeated No. 4-1A Orono by a 2-1 margin Thursday night at Richfield Ice Arena.

With bodies in front of the net and a scramble to find the puck, Holy Angels junior Emilie Anderson found the puck on her stick and quickly scored for the 1-0 lead. Anderson made it 2-0 early in the third period before Orono got a power-play goal to cut the deficit back to one.

Junior Eva Bentley made 26 saves for the Stars, while senior Celia Dahl stopped 12 shots for Orono.

In the head-to-head series, the Stars (8-1-0) snap a three-game losing skid to the Spartans (6-2-2) after losing to them three times last season including in the Class 1A, Section 5 championship game. 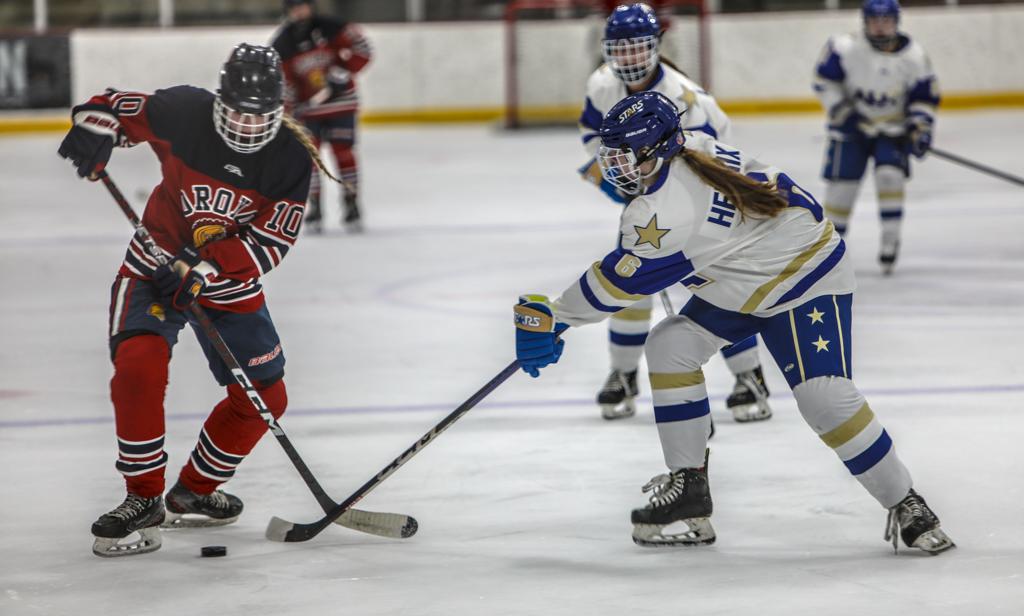