Last year she secured the Skippers' first Class 2A championship with a goal late in regulation. On Friday, Petersen put her team in contention for a repeat. She scored at the 6:21 mark of overtime as the Skippers held off Lakeville North 2-1 at the Xcel Energy Center.

Petersen took a pass from Sidney Morin at the blue line, maneuvered around a Panthers defender and put the puck over goalie Cassie Alexander's shoulder.

"She went down so I knew I had to go high," Petersen said.

No. 1 seed Minnetonka (24-5-1) advances to play No. 2 seed Roseville in Saturday's championship game. The teams have combined to win the past two big-school titles.

Lakeville North (23-6-1) threatened to disrupt a meeting of past champions as freshman Riley Tousignant scored with less than four minutes to play in regulation. She rifled a shot over goalie Sydney Rossman's glove.

The goal triggered emotions on both benches. Minnetonka coach Eric Johnson "was concerned the game wouldn't go the way we wanted it to go."

Even the Panthers were caught up in the moment.

"When we scored the first goal reality kind of hit," Panthers coach Buck Kochevar said. "We thought it would be amazing to get to the championship game. But I think we also fell back on our heels a little bit."

Not Morin. Her game-tying goal with Rossman on the bench for an extra skater and 20.9 seconds to play owed to unrelenting pressure. She saw a puck loose under Alexander's leg pads and charged.

"I went full blast and shoveled it right in there," Morin said.

The dramatic goal had a dire effect on the Panthers' psyche. Kochevar said the coaches "told players to pick up their emotions" before the overtime period. Did it work?

Minnetonka’s junior goaltender Sydney Rossman did a little bit of everything in the Skippers 2-1 win in overtime in the semifinals of the state tournament at the Xcel Energy Center on Friday, Feb. 24.

Of course she stopped shots, natural for a goalie.

Then, while tied 1-1 in overtime, Rossman decided to flex her offensive game as well. After a puck was cleared by Lakeville North, Rossman left the safety of her crease and ventured out into open ice to pass the puck to Sidney Morin.

From there, Morin found teammate Amy Peterson who notched the game winner, giving Rossman an assist on the play.

“It feels pretty good. I wasn’t trying to do that…” Rossman said after the game. “I saw them changing-- we work on that during the season, to know when they’re changing and know when to get the puck up.”

Rossman now has two assists on the season, her last one coming in a win over Buffalo in the section playoffs. Although tallying points isn’t something she is used to, Rossman admitted that she had fun contributing to goals.

“It’s a little different,” Rossman said with a smile. “It’s a different feeling but it feels good.”

The Skippers’ backstop stopped 30 shots the win, continuing her fantastic season and propelling the team to the Class 2A championship game for the second year in a row. 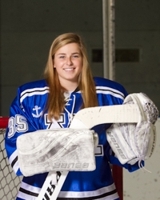 Last season, Rossman was stuck behind star goaltender Julie Friend. Friend led the Skippers to a state title and was named the AP Player of the Year as well as earning Star Tribune all-metro first team honors.

So far, living up to those lofty expectations hasn’t been a problem.

“Last year Julie Friend was our goalie and she’s obviously amazing and I learned a lot from her,” Rossman said.  “I watched her in state and sections. It’s cool to be doing it firsthand now, but she taught me a lot.”

In Friday’s low scoring battle, Rossman called upon everything she learned from Friend to help her bounce back letting Lakeville North score late in the third period. After the goal, Rossman put a lock on the net, shutting down the Panthers.

Instead of being rattled by allowing the first goal of the game, Rossman had a little extra motivation from her bench.

“Our assistant coach said some words to me to get me pumped up,” she said. “I don’t know exactly what they were but they got me fired up and ready to play.”

A tough night to pick just three stars, so Petersen and Morin share the top spot. Morin, a junior defensemen tied the game with time dwindling in the third period to force overtime. She broke the curse that Lakeville North goaltender Cassie Alexander had put on the Skippers’ offense by tallying her  seventh goal of the year. She also assisted on Amy Petersen’s game winner to bring her season total to 31 points. Petersen, a junior forward netted a beautiful game winner for Minnetonka to notch her 47th point of the year (12 goals, 35 assists).

The junior goaltender for the Panthers was phenomenal. The number on her jersey, double zeroes, represented the Skippers’ offense for most of the game. Alexander finished the game with 37 saves. On the season she ended with a sparkling 1.61 goals against average and a 92.5 save percentage.

She may not have been as flashy as Cassie Alexander, but Rossman out-dueled the goaltender from Lakeville North and moved her team into the championship game. The junior goalie made 30 saves in the win to move her record to 17-3-1. Rossman also has had an incredible season, sporting a 1.25 goals against average.