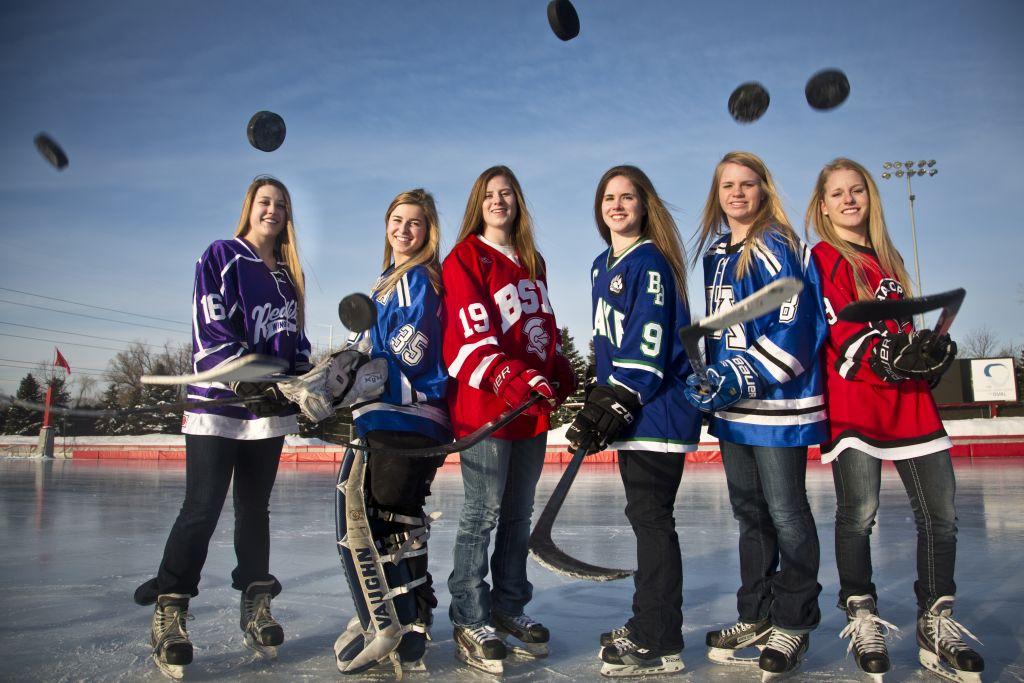 The fuel injector in Red Wing's high-performance offensive engine. Scored 20 goals and added 47 assists as the Wingers averaged 6.2 goals in 27 games and returned to the Class 1A tournament. Jumps into every rush. Outstanding physical fitness allows her to log major minutes each game.

A potent mixture of sound technique, fluid movement and a competitive streak make Rossman tough to beat. Posted a 13-3 record for the two-time defending Class 2A champions, stopping 93 percent of shots faced and allowing only 1.18 goals per game. Skippers' depth of talent in goal forced Rossman to share starts.

Great hands and vision help her stand apart from a crop of talented Red Knights forwards. Scored 31 goals and showed knack for finding teammates with 45 assists. Carried team to section finals with a hat trick in the semifinals, added a goal and an assist in the championship game.

Tremendous skating fuels a solid all-around game for the Star Tribune Metro Player of the Year. Takes faceoffs, plays defense and scores big goals with equal aplomb. Scored 54 goals, including two in the third period of the Class 1A, Section 5 championship. Seeking her second state title after winning one in eighth grade.

Stands out among the excellent Skippers' defensive corps for strong play in the defensive zone and flashes of offensive flair. Scored eight goals and added 20 assists in 23 games. Explosive skater who covers a lot of ground. Missed time to play for Under-18 national team in Finland.

Explosive skater whose first three strides compare with anyone in the state. Good speed and a quick, hard shot produced 45 goals for the Sabers. A constant threat in the offensive zone. Reads the play well, uses time and space effectively. Helped the U.S. Under-18 national team win a silver medal at the world championships in Finland.

HOW THE TEAM WAS PICKED

The Star Tribune's All-Metro teams and Metro Player of the Year were chosen based on nominations from metro-area coaches, conversations with a panel of coaches and staff observations. Sydney Baldwin, Dani Cameranesi, Paige Haley and Kelly Pannek have committed to play for the Gophers. Amy Menke will play for North Dakota and Sydney Rossman signed with Quinnipiac.