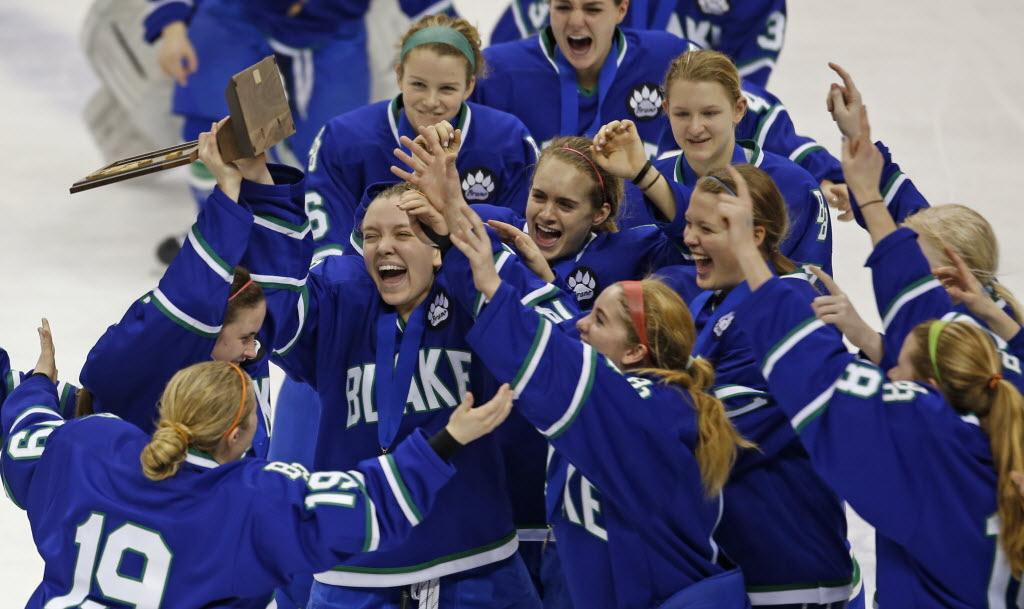 These are just a handful of the tools Blake lacked in a mid-December walloping by Warroad, each of which were sharpened and refined in preparation of Saturday's Class 1A championship at Xcel Energy Center.

The Blake trio cut up and flattened No. 1-seed Warroad 7-2 to avenge the embarrassment, but more importantly claim the Bears' fourth state title and first since 2009.

"Completely different" is how first-year coach Shawn Reid described his team. Goaltender Tori Johnson called it "realistic" improvements. Bullock referred to it as a comprehensive growth.

"I think it was a pretty big difference," said Cameranesi, who missed the 12-3 loss to Warroad while playing with the U18 women's national team. "I think that actually kind of helped us. Maybe a little bit of reality check that we weren't unbeatable. That we do have to work hard every shift to earn a win in the end. And that is a great deal of getting here and winning this game."

Whatever the Bears had to say sounded nearly as good as their performance on the ice.

Each response had the same  thought and precision behind every pass, shot and movement made against Warroad. This sort of heightened effort was required to beat a team that hadn't lost to a Class 1A opponent all year and was the heavy favorite entering the tournament.

Warroad was stunned by the Blake team that showed up on Saturday.

Because he said he had no other words describe what happened to his team, Warroad coach David Marvin resorted to an expletive to convey the result before further explaining himself.

"Are you kidding me. They took us out behind the woodshed," Marvin said. "I think that's the worse I've been beaten."

An emotional Warroad declined interviews with its players.

It was at least the worst Warroad was beaten this year. Three goals were the most it had given up until Blake surpassed that total in the final minute of the first period when Karlie Lund added a goal to her two assists.

Lisa Marvin and Lynn Astrup accounted for Warroad's two goals. Though the Warriors had just five shots less than Blake, 26-21, nothing was getting past Johnson. She had 19 saves, many of them one-on-one opportunities for Warroad's prolific scorers Kayla Gardner and Marvin.

"As soon as we step out on the ice we know our goal," Johnson said. "At the beginning of the year we set our three goals — section, state, and conference — and we worked hard enough to reach all three of them. I'm so proud of us."

The Star Tribune's Metro Player of the Year, Cameranesi, closes out her impressive high school career the same way it started. She was a state champion as an eighth grader and in her final high school skate earned a goal, an assist, a medal around her neck, and plaque to raise above her head.

After the U18 national team lost the IIHF World Championships' title game in early January, Cameranesi craved a championship.

"I was looking for a championship somewhere," she said, "so I'm glad I got one."