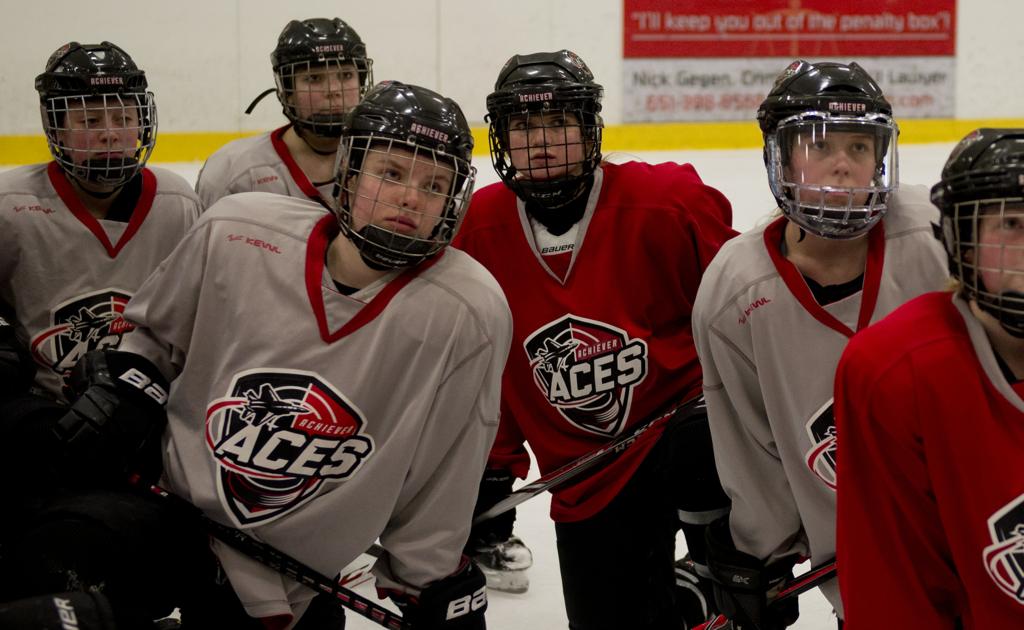 The Achiever Academy girls’ hockey team listened intently as coach Chris Peterson described the next drill at a recent practice in Vadnais Heights.

Instead of playing a section championship game Thursday night and quite probably heading to the girls’ hockey state tournament, Achiever Academy called it quits just a few hours earlier in the day amid intense scrutiny over eligibility questions about its players.

In a rare and possibly unprecedented move, the private online high school withdrew from the playoffs, even as it held the top seed in its section of Class 1A. As a result, St. Paul United, the opponent in a game that never was played, will make its first appearance ever at Xcel Energy Center.

Officials from Achiever Academy, which offers intensified hockey training to girls and boys, had been meeting with the Minnesota State High School League since at least last Friday, trying to resolve eligibility questions swirling around as many as six girls.

At the root were concerns, shared in an unsigned e-mail sent to the league, that the players did not meet residency requirements. In some cases, parents did not relocate to Minnesota when players moved here, the e-mail claimed. In others, in-state players transferred but no family move apparently took place, as required by league rules.

Early Thursday afternoon, United coach David Cole and his team were expecting to play. But coaches of other Class 1A teams, who were sent the same e-mail that went to the league, were being urged to pressure the league to take action before the game was played.

Just four hours before game time at St. Thomas Arena in Mendota Heights, the league and Achiever issued a joint statement announcing the team’s withdrawal. League executive director Dave Stead said it was the first such action involving a playoff team that he could recall in his tenure.

“I completely respect the decision. It shows principle,’’ said Cole, whose team lost to Achiever 7-1 on Jan. 30. “It’s a great teaching moment for kids. I wish the timing was better but in some ways our kids are being rewarded for their hard work.”

Achiever Academy owners Greg Gartner and Tom Forsythe, who bought the school in January, declined to comment beyond the joint statement. They had indicated previously that they planned a renewed focus on the school’s academics.

Achiever, at the league’s request, “conducted a review of athletic eligibility determinations of students identified by the MSHSL for violating the Transfer Eligibility rules of the League,’’ the statement said. “The new ownership of Achiever Academy has met with students and supported them and their families, and has simultaneously worked with the MSHSL to resolve their concerns.’’

The statement said the league “appreciates the cooperative steps Achiever Academy has made and looks forward to future participation together as a member of the MSHSL.’’

Achiever opened as a grade 7-12 high school in 2012, spawned by a companion hockey training operation known as Northern Educate. They were started by Shawn Black, who had sought unsuccessfully to buy the Vadnais Heights Sports Center, where the school is run.

Achiever provides up to three hours of hockey training in the morning and an online academic curriculum in the afternoon. The school, with 71 students, started the girls’ hockey team this season.

In addition to wondering about the eligibility of players attracted by the school’s hockey training, some also have questioned the school’s academics and raised fears of burnout for young athletes.

While player eligibility issues are always touchy, they take on added sensitivity during the playoffs. Teams defeated by another later found to be using an ineligible player have no recourse.

The most dramatic illustration occurred in October 2012. Prairie Seeds Academy was banned from the Class 1A boys’ soccer state tournament for using an ineligible player. It was discovered after it won its section final game. The school forfeited its victory but the opponent — Totino-Grace — was not awarded a state tournament berth.

Thursday’s developments ensure a different ending. Cole planned to speak to his players and notify parents of the team’s unexpected trip to state through the school activities department.

“I’m sure the girls will be very excited,’’ said Cole, whose team consists of players who attend school at Visitation and St. Paul Academy. “Going to state is the dream of every player.”