Unheralded and unranked, the Eagan girls’ hockey team is playing fast and racking up wins. 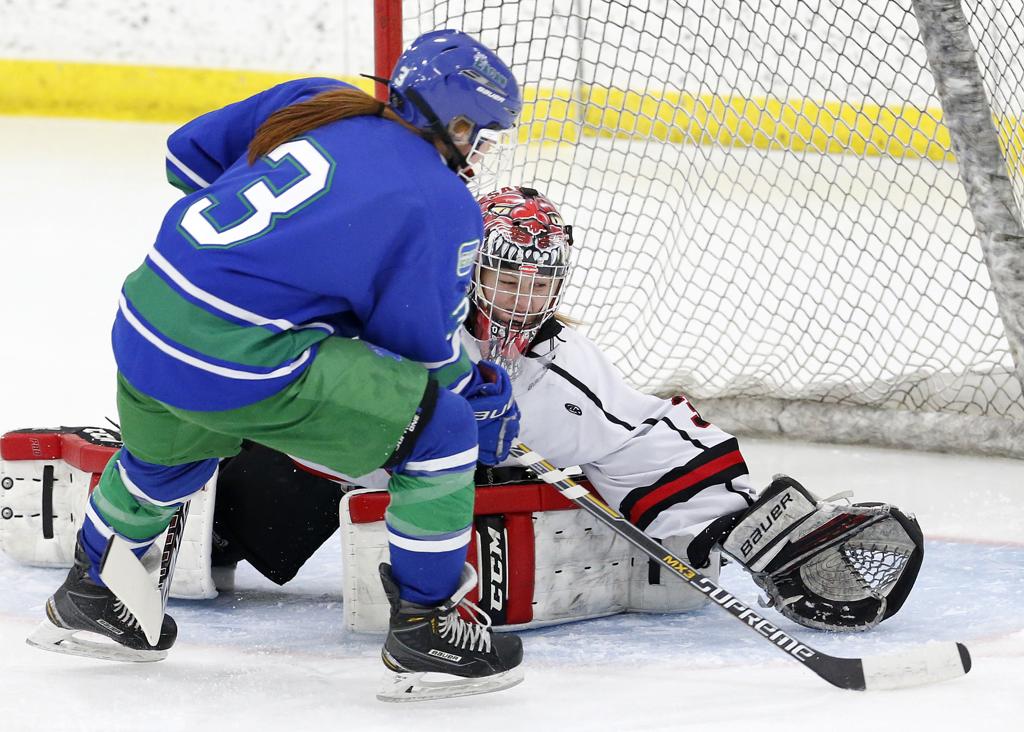 Brooke Madsen (3) of Eagan shot the puck past Shakopee goalie Kalli Engen (33) for a goal in the first period. (Carlos Gonzalez, Star Tribune)

It’s easy to look at the Class 2A rankings and not think about the Eagan girls’ hockey team. After all, South Suburban rivals Lakeville North and Lakeville South are both in the top 10.

Statistics don’t help the Wildcats’ case, either. They don’t have any players among the state’s top 50 scorers.

Don’t worry, Eagan co-coach Ryan St. Martin is just fine with his team getting overlooked in a crowded, seemingly wide-open race to the Class 2A state tournament.

“At the end of the day, we’re just looking to hit our stride at the right time and be ready for the playoffs,” he said. “Rankings and things don’t matter at the end of the year. We just want to be the strongest team at the end.”

The Wildcats (15-8-1, 12-4-1 South Suburban Conference) are trending that way. They had won six of their last seven games heading into Saturday’s regular-season finale against Farmington. After a 2013-14 season in which Eagan went 11-14-1 and missed out on the state tournament for the first time in three years, the Wildcats program appears to be on the rise again.

Eagan returned six seniors from last year’s team and injected a number of underclassmen who have proven to be big contributors, St. Martin said. The Wildcats aren’t a group of standouts, the coach added, but rather a team that has embraced a united mindset and the idea of playing fast.

“We’re a really strong team, skating-wise,” St. Martin said. “The girls have really bought into being a team with a lot of speed and good puck support. They do a good job in the defensive zone, sacrificing and blocking shots. It’s just all these little things that make the difference compared to last year.”

Junior forward Brooke Madsen leads the team in scoring with 18 goals and 19 assists for 37 points. Freshman defenseman Taylor Anderson is second with 15 goals and 30 points. Anderson is one of three freshmen playing key roles, along with two eighth-graders.

But it’s been the upperclassmen who have set the tone, St. Martin said. Captains Taylor Ramthun, Alexia Wilson and Madsen — as well as seniors Rachel Wall, Saira Moore, Aryn Embertson and Olivia Asta — have helped build a team culture in which players sacrifice for the good of the team, both on and off the ice.

“Everything has just been about putting the team before individuals this year,” St. Martin said.

Eagan has made eight state appearances since 1998, including four since 2008. Getting back to Xcel Energy Center in February means battling through the challenging Class 2A, Section 3 tournament. Of the other teams in the section, Eagan lost its lone meeting with Hastings, 4-3 on Dec. 4. The Wildcats also split the season series with Eastview, losing 3-1 on Dec. 13 and winning 4-3 on Jan. 24.

Those results won’t mean much once the puck’s dropped, St. Martin said. He doesn’t mind if the Wildcats might enter the playoffs with little rankings notice, but he’s excited about the noise they might make.

“You can always make grand plans for the season, but things never quite shake out like you think they will,” he said. “We’re just focused on playing our best here at the end, and I think the rest can take care of itself.”