The Huskies persevered despite losing both their top goalie and their top scorer. 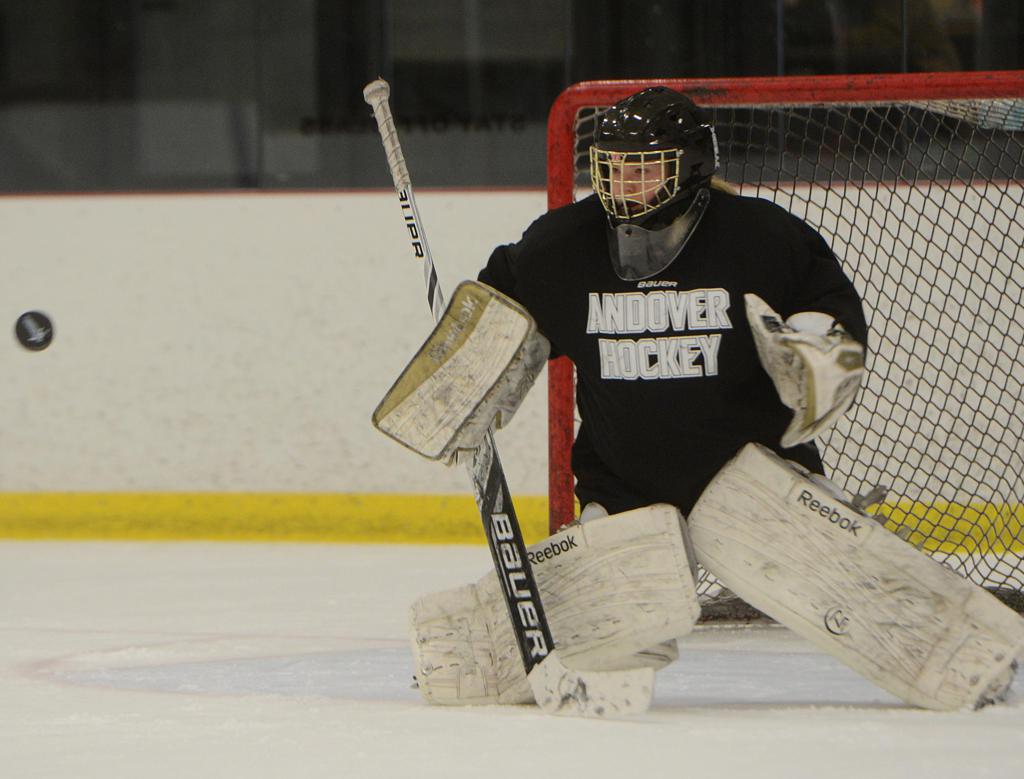 Eighth grade goalie Cassidy Stumo tends the goal as a puck flies at her. ] BRIDGET BENNETT SPECIAL TO THE STAR TRIBUNE &#x2022; bridget.bennett@startribune.com Stumo stepped up after the team lost their standout goalie to the boys program. Andover girls

Cassidy Stumo cheered from the Xcel Energy Center seats as Andover made its girls’ hockey state tournament debut a year ago.

One year and 27 starts at goaltender later, Stumo will be watching the Huskies’ return to St. Paul from behind her facemask. Stumo, an eighth-grader, helped Andover overcome one of the two critical personnel losses that threatened its chances to return.

Senior Maddie Rooney, one of the state’s top goalies, announced she was taking her talents to the boys’ team after backstopping Andover’s run to the consolation championship. Her departure threatened to derail high expectations.

The team pressed on only to lose leading scorer Michelle Holmes (15 goals, 31 points) to a broken collarbone just before the playoffs.

A team with just one senior on the roster responded with a veteran’s moxie, fighting its way back to St. Paul for this week’s Class 2A state tournament.

“I would say it’s been more satisfying this year,” second-year Andover coach Melissa Volk said. “I’m saying this completely honestly, they are the best group of kids I’ve ever had the privilege of coaching.”

Andover (14-12-2) opens play at 6 p.m. Thursday against No. 1 seed Minnetonka – the same team against which Stumo started her first varsity game. Stumo, who jumped from Andover’s Under-12 team to varsity, saw a season-high 45 shots on goal in the 4-1 loss to the Skippers.

“Everything I did, I was kind of nervous and even second-guessing myself,” Stumo said. “But it was a good experience — this whole year has been. I’m really lucky things happened this way because I’ve gotten a lot better. We’ve all gotten better as players and stronger as a team.”

Stumo won 13 games and posted five shutouts to stabilize the goaltending situation. She has an .888 save percentage.

“She came in with the right mind-set,” Volk said. “There’s never been a doubt in any of our minds what she can bring.”

Volk took umbrage to questions about overcoming the loss of Rooney: “That happened last summer so to talk about it now, I think, takes away from this. We’ve moved on; it was a great opportunity for another kid.”

Stumo wasn’t the only youngster learning on the job. Volk said 10 of the 30 players in the program are eighth-graders.

The season became an exercise in patience and persistence. The Huskies were 3-4 record after season’s first month, leaving Volk to joke, “If we were playing [in] the playoffs in November, I would have been a little worried.”

Regrouping from mid-December to mid-January, Andover went 6-1 and showed promise. But the team was dealt another blow when Holmes was lost for the playoffs. Again, the Huskies rallied.

Junior Sidney Portner, who scored five goals all of last season, tallied five in three playoff games. She carried her team with both goals in a 2-0 quarterfinal victory against Cloquet-Esko-Carlton. And in the section championship game against Elk River/Zimmerman, junior defenseman McKenzie Sederberg scored twice.

“I think the reason we did so well is because our attitudes stayed positive,” Butorac said. “We were always reminded to not look back, to look forward.”

A rematch with Minnetonka awaits, but the players are confident. Andover’s players respect the Skippers but will take a confidence into the game as a young team with maturity beyond its years.

“This team is the true definition of grit,” Volk said.