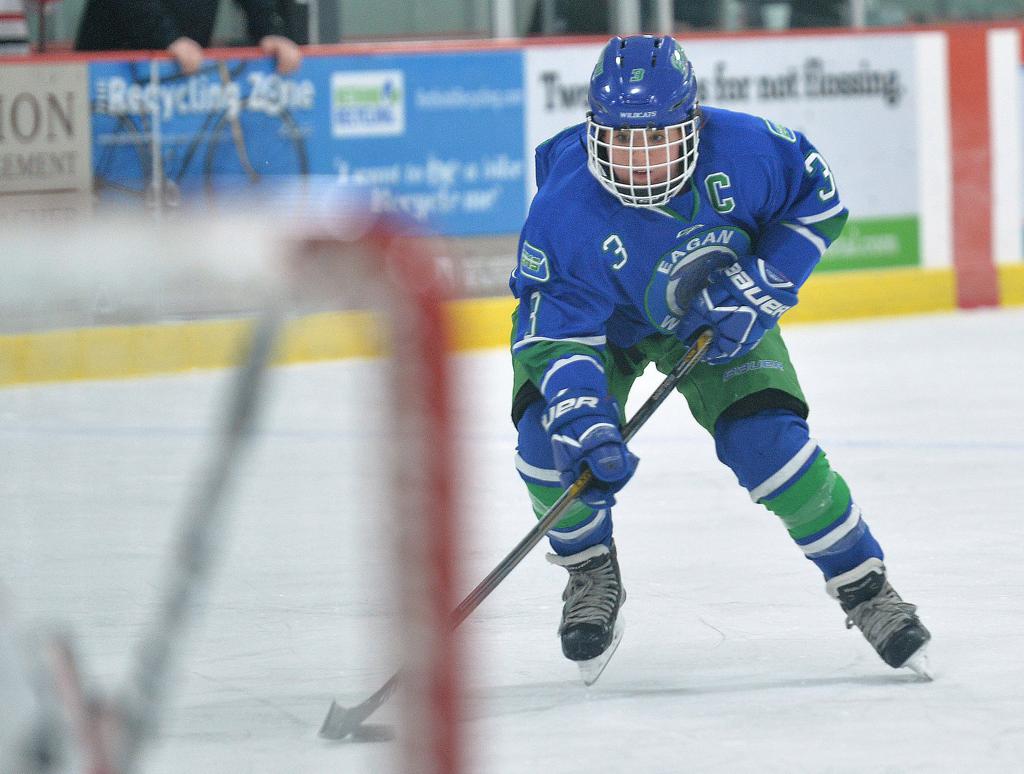 Eagan senior captain, Brooke Madsen, moves the puck towards the net during the first period of a game against Lakeville North Saturday, November 21 at Ames Arena in Lakeville. ] (SPECIAL TO THE STAR TRIBUNE/BRE McGEE) **Brooke Madsen (blue, 3)

But that doesn’t mean it’s run-and-gun, all-offense all the time. More than anything, St. Martin said, his players are “kids who find ways to win.’’

Opponents are quickly finding that out early in the 2015-16 season. An afterthought in much of the preseason girls’ hockey chatter, Eagan is ranked just 20th in Class 2A for now. But the Wildcats are 4-0-1 and already have begun making a case as front-runners for the South Suburban Conference title.

They won a fast-paced, back-and-forth 5-4 game against Hopkins in the season opener Nov. 7, and they earned a 2-1 victory over No. 14 Lakeville North on Nov. 21. In between, Eagan has solidified its top line as an imposing scoring threat, found a consistent goalie in a freshman, and developed a team approach that both Eagan coaches simply shake their heads at.

“What we have this year is just great chemistry together — the best I’ve ever seen as a coach or a player,” said co-coach Kallie Flor, the Farmington alum who played four years and served as a captain at Division I Quinnipiac. “We have fantastic leadership, and they lean on each other, work together, have the same goals. They push each other.

“And none of them want to settle for less than they think they’re capable of.”

So, what are the Wildcats capable of?

“This is a special group that could be one of the better ones to come out of Eagan, and that’s really saying something,” St. Martin said.

Eagan is coming off a season that ended in disappointing fashion. The Wildcats had won nine of their last 10 games, by a combined score of 35-9, heading into the Class 2A, Section 3 final against Eastview.

But they lost 6-4 to the Lightning and finished the season 18-9-1, one victory short of a third consecutive state tournament appearance.

“Not to take anything away from what that team accomplished … but everyone is coming back with a little bit of vengeance this year,” Flor said. “We return a lot of those key players, and they know what they need to do to get there.”

Three forwards, who now make up the Wildcats’ top line, key that group of returners. Senior co-captain Brooke Madsen and sophomores Taylor Anderson and Abby Barger have combined for 14 goals and 23 points through the team’s first five games.

The biggest question mark entering the season may have been in goal. St. Martin said the team had an open competition during tryouts and through that it found freshman Ashley Larson.

Since winning the starting job, Larson has gone 4-0 with a 1.94 goals-against average and .908 save percentage.

The Wildcats have a mix of upperclassmen and younger players, giving them depth.

St. Martin said the team is happy with its fast start, and hopes to keep up the pace the rest of the way.

“We’re a really fast group of kids who are relentless on the puck,” he said. “They’re also really supportive on the bench, and that’s infectious; it makes everyone work harder, everyone want to block shots and just do the little things that we need to win.”