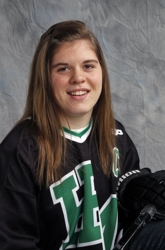 When Greg Brandt watches his daughter play hockey — and as Hill-Murray’s videotaping volunteer, he sees a lot — he finds himself shaking his head in disbelief at just about every game.

“The little things that she does on the ice, it’s incredible,” he said of the junior, who led the Pioneers to the state tournament for the first time this season, scoring a team-high 65 points heading into Thursday’s Class 2A quarterfinals against Lakeville South. “She’ll spot a teammate across the ice, not even looking at her, but just hit that person right in front of the net with a beautiful pass. And the things away from plays — some new move or something — and you’ll wonder, ‘Where did that come from?’ At some time every game, she’ll amaze you.”

But Hannah’s ability to surprise him is a quality Greg Brandt has almost come to expect from the 5-6 forward, who he said possesses a uniquely creative mind, when it comes to hockey. In fact, Hannah was a surprise from the very beginning.

Before Hannah was born, Greg and his wife, Robin, had become convinced they were infertile after trying for several years to conceive. Finally, deciding they would instead adopt and “grow their family” that way, they completed the paperwork for Hannah’s older sister, Marissa — now a senior and also a key member of the Pioneers hockey team. Then, before their new child had even arrived, they discovered they were pregnant with Hannah.

“It was pretty surprising, because we had pretty much given up that it was going to happen,” Greg said with a laugh.

She only continued to keep them on their toes. At age 5, Hannah had found her favorite pastime: playing football in the front yards with all the boys in the neighborhood. She told her dad that she wanted to join a team, but he realized that, at some point, the forums for her to play football would dry up. So Hannah found her own replacement. At the time, she was taking figure skating lessons with her sister, but the skating part was the only thing she really found very interesting.

“I was wearing hockey skates the whole time, so I couldn’t really do much,” she said. “It didn’t last long. Then I got into hockey.”

That changed everything, her father said.

“We kind of joke about it now; she was like a Herman Munster on skates,” he said. “It was almost kind of comical on the ice. … She just wasn’t the graceful and dainty type. Now, in her hockey gear — totally different.”

From then forward, Hannah made a seamless transition  into the game, and by the time she made the varsity team in eighth grade, she had earned a reputation not only as a scorer — she has led the team every year since then — but as a true hockey player.

“Hannah is truly a treasure,” said her coach, Bill Schafhauser. “She has instincts and vision you rarely see in a player, whether they be male or female. I’ve never quite seen anybody like her, to be honest, and I’ve been in the game a long time. It’s an amazing thing to witness.”

Brandt works hard at practicing her craft and getting involved in various summer programs. Her dad said she watches a lot of the tapes he brings home from games. But a lot of the success she has had is the result of natural tendencies to the sport, her coach and dad say.

“I think mostly it just comes from a spur of the moment,” said the elder Brandt, who said he thinks she stores up ideas for creative moves from things she’s tried in camps.

And now, as Hannah is gaining more experience — she missed five games of the season to play with the U.S. National Women’s Under 18 team, which took the gold at the world tournament in Sweden — and the team finds itself on a different stage, she’s slipping naturally into a new role.

“I’ve seen her kind of evolve into a leader this year, especially in the playoffs” Schafhauser said. “It’s the first time I’ve seen her fired up in that way. And the girls all just follow her.”