Seniors from Warroad, Minnetonka named Ms. Hockey and Goalie of the Year

Warroad senior forward Karley Sylvester questioned her place on stage Sunday at St. Paul's RiverCentre among the five finalists for Ms. Hockey. But the college and high school coaches consulted in the selection process left no doubt.

Sylvester earned Ms. Hockey honors, capping an amazing string of hockey highlights this year. In January, she helped the U.S. Under-18 team win a gold medal at a world tournament in Sweden. On Saturday she played a big part in Warroad's second consecutive Class 1A state championship. And she drew big cheers from her teammates Sunday for winning Ms. Hockey.

"I actually had to think about it for a second and make sure it was my name that was being called," Sylvester said. "It means so much. I'm so thrilled and honored to win knowing there were a lot of great players up for the award." 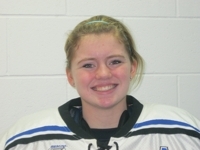 Minnetonka's Julie Friend won the Senior Goalie of the Year award. On Saturday, she helped the Skippers win their first Class 2A championship.

Gigi Marvin, a Warroad standout who won Ms. Hockey honors in 2005, was on hand to support Sylvester. When she first met Sylvester years ago at a hockey tournament, Marvin knew the youngster had a bright future.

"You notice at a young age if a kid is special or not, and she had that quality," Marvin said, adding that Sylvester's relentless style showed throughout Warroad's tournament run.

Sylvester's coach, David Marvin, said Sylvester's focus and drive set the tone for a Warroad team determined to defend its championship. On a team loaded with solid players, Sylvester finished fourth in goals (30) and second in assists (47). She will play at Wisconsin next season.

"She just brings it all the time," David Marvin said. "To have her on our team has been really special."

On Saturday, Amanda Arbogast of Eveleth-Gilbert and Carolyn Draayer of Minnetonka each received the Herb Brooks Award, given to one player in each class who best represents Brooks' hockey values.

Four women made up the officiating crew for Saturday's Class 2A championship game – a first in Minnesota.