Sophomore Jenna Hoops netted a pair of goals in the United's victory. 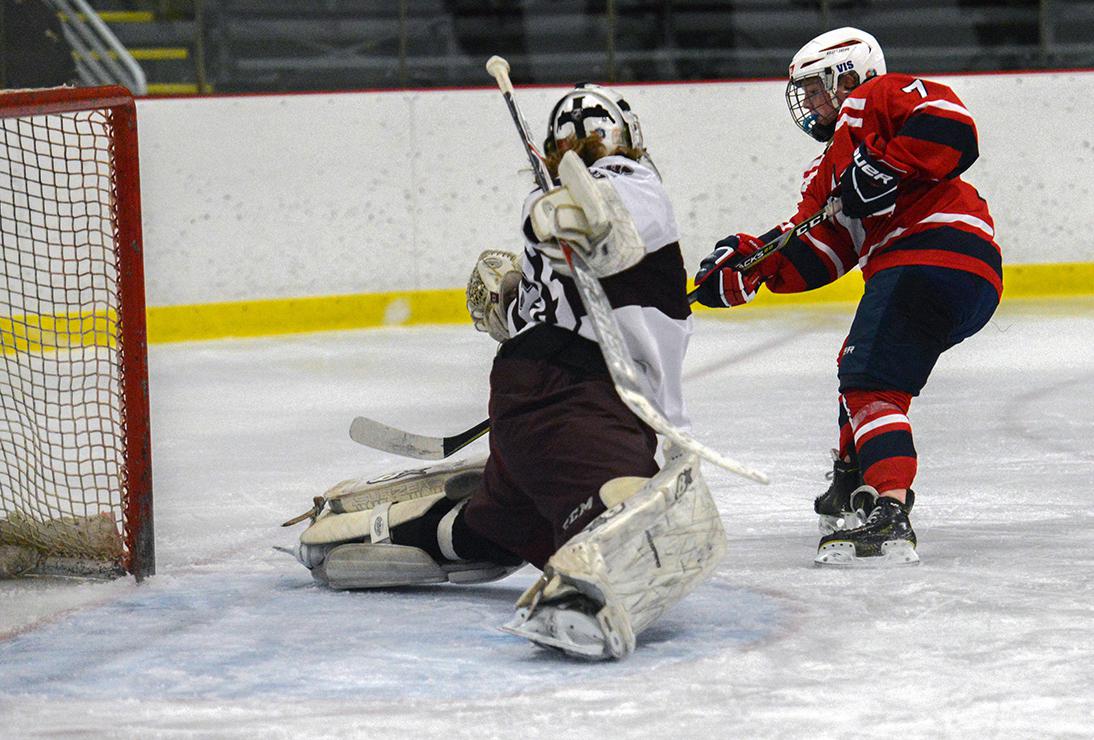 After playing a scoreless first period against South St. Paul, St. Paul United senior forward Samantha Burke was looking for any way she could to fire up her team.

As she and her teammates were waiting to get back on the ice after the first intermission, Burke playfully pushed teammates around, yelling out words of encouragement, and even did an Irish jig.

Burke’s motivational tactics proved to be successful. One minute and 17 seconds into the period, sophomore forward Jenna Hoops got the United on the board late during a power play. Her tally proved to be the game-winner as St. Paul United shut out the Packers 3-0 on Tuesday night at Doug Woog Arena in St. Paul.

The game was a chance for both teams to put their mark on the race to the top of Class 1A, Section 4. St. Paul United (7-3) and South St. Paul (6-4) have been consistent threats to make the state tournament. This game would go a long way in determining which team has the top spot come February.

“Lots of girls played on JV last year and got to see how important it was to us,” Burke said. “I think our newer players did a good job of adopting our mindset and seeing how truly important this game was to us.”

Both coaches acknowledged that their teams were prepared for this intracity battle. The intensity could be seen on the ice. The game was a physical one, which led to 11 penalties being called.

“I don’t think we backed down from them, which is good,” South St. Paul coach Dave Palmquist said. “But you can’t expect to beat them when you take that many penalties and put their power play out there that much.”

This theory was proven true by Hoops’ goal early in the second period, which came on the power play after South St. Paul senior defenseman Brooke Deering committed a body-checking penalty late in the first period.

Hoops’ goal is part of a tear she’s been on to open the season for the United, who are ranked ninth in the Class 1A coaches’ poll. The sophomore is now second on the team with nine goals this season after tallying a pair of goals in the win.

“She really understands the game and is mature for her age,” said Burke, who leads St. Paul United with 11 goals on the season. “She did a good job tonight of leading by example.”

The No. 8-1A Packers were unable to recover after that early goal and came away without being able to get anything past St. Paul United’s junior goalie, Kenzie Giese.

But falling short Tuesday hasn’t stopped Palmquist from believing in his team’s chances in the postseason.

“It’s early December, we want to be playing our best hockey later in the season,” he said. “We’re disappointed but we learned a lot. We know what we have to do if we’re going to beat those guys.”

As St. Paul United coach Nate Mauer pointed out after the game, getting up for each and every game can be a challenge. He hopes that with leadership from players like Burke and his own personal tactics, his players will enjoy all their chances on the ice.

“One thing that happens when girls play year-round hockey is that they don’t necessarily get excited every time there’s a game,” Mauer said. “We are trying to make things more fun. You’re only guaranteed 27 high school games a season.” 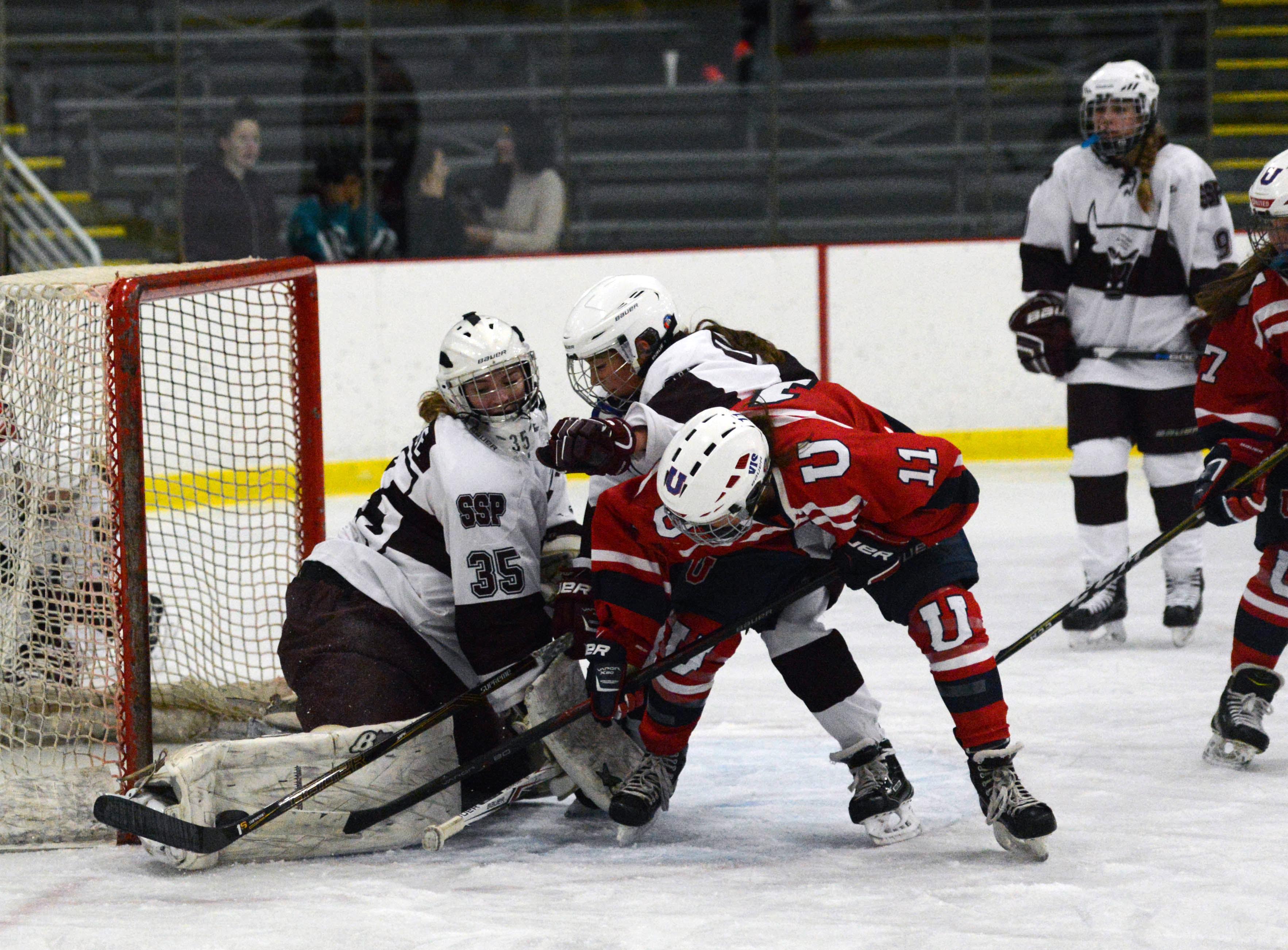 South St. Paul senior goaltender Kaity McKenzie (12) holds the puck out of the net against St. Paul United. The United shut out the Packers 3-0 on Tuesday. Photo by Carter Jones, SportsEngine

After being ranked one slot below South St. Paul in the Class 1A coaches’ poll, St. Paul United responded with a 3-0 shutout win against its crosstown rival at Doug Woog Arena in St. Paul on Tuesday.

Following a scoreless first period, the United (7-3) got on the board less than two minutes into the second period as sophomore forward Jenna Hoops found the net in the waning moments of a power play.

She added her second goal of the evening in the third period with another power-play goal, giving Hoops her ninth on the season, which is second most on the team behind senior Samantha Burke (11 goals).

Late in the second, the No. 9-1A United added to their lead when sophomore forward Sophia Hoppe rifled one through the legs of South St. Paul senior goalie Kaity McKenzie.

The No. 8-1A Packers relied on McKenzie throughout the battle of Class 1A, Section 4 foes. However, her 14-save effort wasn’t enough for South St. Paul (6-2) to come away victorious.

St. Paul United’s goalie, junior Kenzie Giese, came through for her team with 15 saves, good for her third shutout of the season. 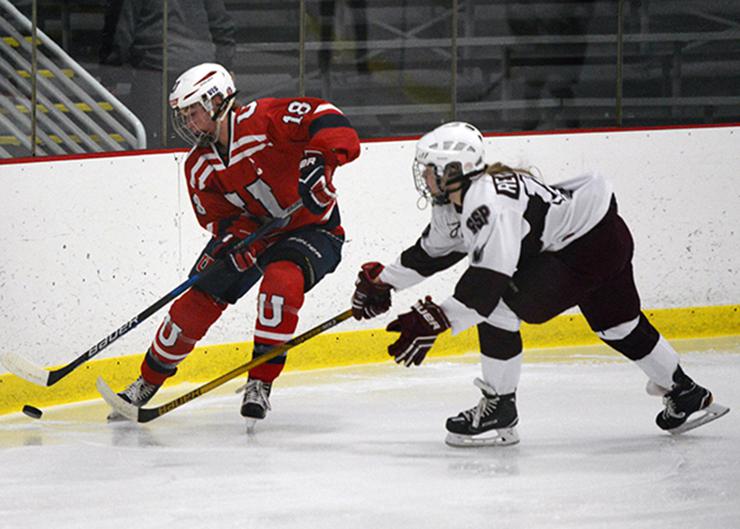