Crimson junior goalie Lucy Morgan stopped 37 of 40 shots Thursday against the No. 3-2A Hornets. 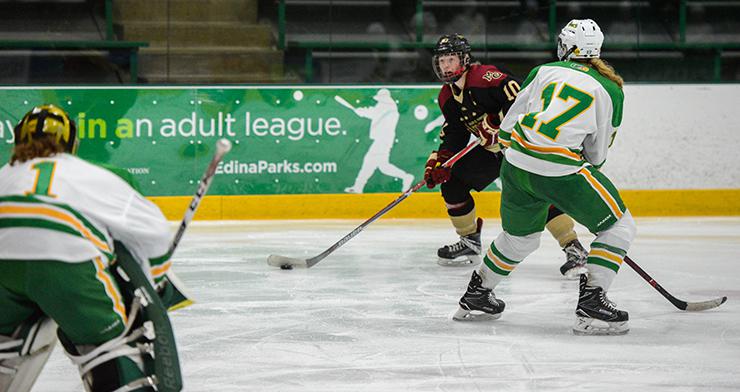 With Maple Grove heading into its third game in as many days, Crimson junior goalie Lucy Morgan already had a tough task ahead of her.

Add in the fact her opponent would be Edina, the defending Class 2A state champions -- a team averaging 6.17 goals per game -- and the task got that much tougher.

But despite the difficult circumstances, Morgan pulled through. The Maple Grove (10-4-2, 5-3-1) netminder kept her team in Thursday’s Walser Invitational final at Braemar Ice Arena as the Crimson tied the Hornets 3-3. After being deadlocked through regulation and overtime, Maple Grove prevailed in a three-round shootout to take home the tournament crown.

The game will be officially counted as a tie in the standings.

For the past few years, the Crimson had little to worry about when it came to goaltending. Maple Grove used the tandem of Breanna Blesi and Coco Francis to go as far as the 2016 Class 2A state championship.

This season, Morgan was tasked with replacing this highly-regarded duo. And so far, the junior has been up to the challenge for Maple Grove, ranked No. 9 in the Class 2A coaches’ poll. She has posted a .942 save percentage and 1.46 goals against average.

On Thursday, Morgan stopped 37 of Edina's 40 shots in regulation and overtime.

“Lucy gives us an opportunity to win every game,” Maple Grove coach Amber Hegland said. “She studies the game and is ready to play no matter what. She’s always focused.”

On Thursday, it was a rough start for the Crimson. No. 3-2A Edina got off to an early 2-0 start in the first period and had no trouble maintaining possession of the puck. The Hornets outshot Maple Grove 16-7 through the first two periods.

As the game continued, however, the Hornets struggled to extend their lead. The Crimson got within a goal late in the first period and tied the game at two with five minutes remaining in the third period after a scrum in front of the net.

Morgan wouldn’t give up her third goal of the evening until the 13:30 mark of the third period when junior Evelyn Adams scored a power-play goal from the near the blue line. Maple Grove would rally once again when sophomore forward Chloe Corbin tied the game.

From there, Morgan stood tall the rest of the way. She stopped at least 10 shots in the second and third period and 13 more in overtime. The final three stops in the shootout came against Annie Kuehl, Emily Oden and Loli Fidler. All three players have committed to Division I programs.

“I’m that kind of person that doesn’t really feel pressure,” Morgan said. “I just knew my teammates in front of me would do their job. I will say there was some luck.”

Though the game is just a tie for Edina (11-1-1, 1-0), it’s the second time in a week they’ve been put to the test by a Northwest Suburban school. The Hornets fell 3-2 to No. 2-2A Centennial on Dec. 22. Edina will be off for nine days before the Hornets hit the ice again.

“We’re never going to be perfect,” Edina coach Sami Reber said. “We just have to work a little harder. We’ll just take this one game at a time and see what we can do going forward.”

The Crimson, too, will have a nine-day layoff. And while their record also indicates Thursday’s game was a tie, the smiles on their faces and white tournament champion t-shirts will be a reminder of their effort on Thursday.

“They just persevered,” Hegland said. “They leaned on each other and left every on the ice. It’s part of us continuing to grow.” 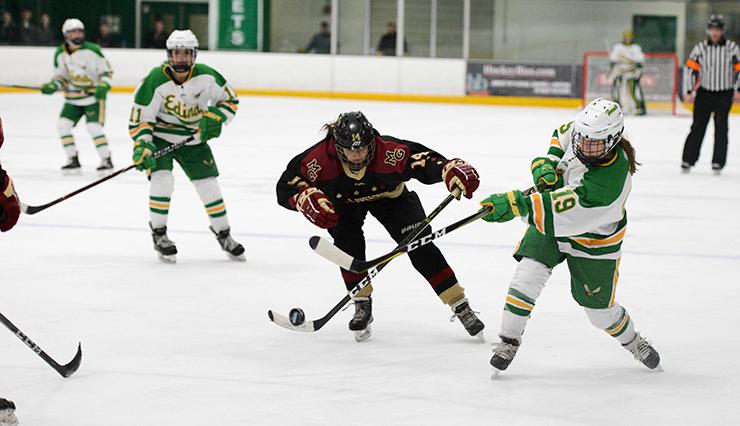 After trailing 2-0 and 3-2, Maple Grove rallied back twice to tie Edina 3-3 at Braemar Ice Arena in Edina on Thursday. The Crimson went on to win 1-0 in a shootout to take Walser Invitational championship.

The Hornets, which are ranked No. 3 in the Class 2A coaches’ poll, started off fast and sustained pressure throughout the evening. Senior forward Aliyah Lance got Edina on the board less than four minutes into the game. Fellow senior forward Loli Fidler picked up her 12th goal of the season when the Hornets (11-1-1, 1-0) extended their lead to 2-0 later in the period.

Crimson freshman forward Lauren Stensile got Maple Grove (10-4-2, 5-3-1) on the board with a breakaway goal in the first.

The No. 9-2A Crimson wouldn’t score again until 4:27 left in regulation when freshman defenseman Brigit Goetsch scored the game-tying goal within a scrum of players from both teams. Edina then tallied its third of the game on a power-play goal from junior defenseman Evelyn Adams 57 seconds later.

With 14 seconds left, Maple Grove sophomore forward Chloe Corbin tied the game by sneaking one past Edina senior goalie Megan Smith, who made 13 saves in 59 minutes of action.

Smith gave up just one goal in the shootout -- the winner by Crimson senior forward Katie Denecke. Crimson junior goalie Lucy Morgan stood tall with 37 saves in regulation and overtime and held the Hornets scoreless in the shootout.

The MN Girls Hockey Hub polls are for entertainment purposes only. 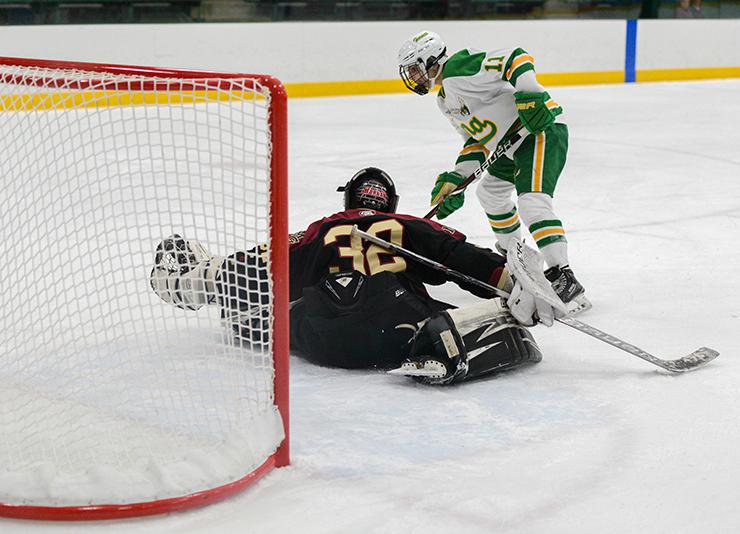