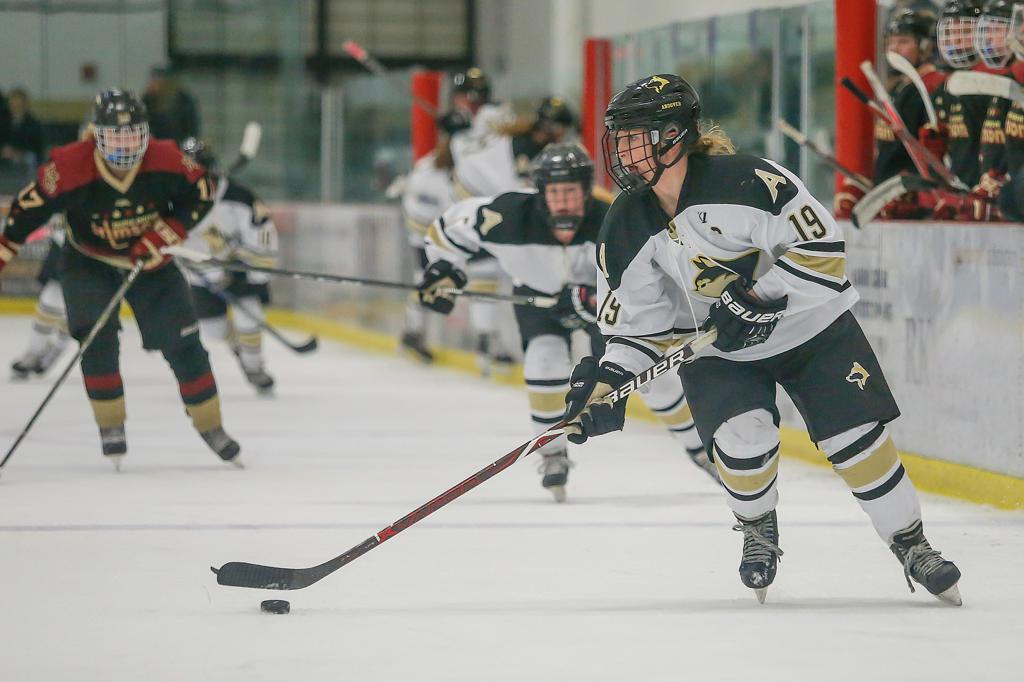 Three Andover girls’ hockey players who competed in the Huskies’ most recent state tournament appearance are leading the way toward what they hope will be a return trip.

The Huskies have flourished thus far, earning a spot in Let’s Play Hockey’s top 10. They have rare victories against top Northwest Suburban Conference opponents as well as victories with Class 2A, Section 7 seeding implications.

A pivotal stretch came in December as Andover compiled a five-game winning streak against Elk River/Zimmerman, Anoka, Forest Lake, Blaine and Minnetonka. The surge of success made the team’s state tournament dreams more real. Andover last played at state in 2015 when Butorac and Halvorson were freshmen and Stumo was an eighth-grader.

“That team’s success had a lot to do with senior leadership and now Claire and I are trying to reflect that,” Halvorson said. “We still text our former captains when we need advice.”

One of those captains, McKenzie Sederberg, provided Butorac lasting counsel.

“The last thing she said in her senior speech was, ‘Be the person on the ice that no one wants to go against because that’s only going to make you better and everyone else on your team better,’ ” said Butorac, who will join Sederberg at Minnesota State Mankato next season.

“[Claire] battles so hard,” said Nelson, Butorac’s linemate last season as well. “I love playing with her because she’ll do anything to get the puck in the net. She gives me most of my assists because I get her the puck and she crashes the net hard.”

The top line does its best work at the key times. With the Huskies tied 2-2 with Forest Lake in the third period, Hemp and Nelson scored to secure the victory. Nelson tallied two goals and Butorac another as Andover sprinted past Blaine to a 6-3 victory — just the second in the teams’ past 10 meetings.

With her team tied 2-2 after two periods at Minnetonka, Butorac scored the lone third period goal. She struck again last week. With Andover trailing 4-3 against Maple Grove in a battle of top-10 teams, Butorac scored a goal with just 2:28 left to salvage a 4-4 tie.

“You watch one of our practices and you’ll see that it’s 100 percent competition,” Butorac said of her team’s tenacity. “That shows in a game.”

“[Coach] Melissa [Volk] says that I do things that don’t show up in the score sheet,” said Halvorson, adept at blocking shots, taking away opponents’ sticks and killing penalties.

“After every game she needs ice somewhere because she blocks shots,” Nelson said. “She sacrifices her body and that shows a lot about her character and how selfless she is.”

Stumo embodies a similar team-first approach. The Huskies’ state tournament starter in 2014-15, she finds herself sharing the net with sophomore Amanda Pelkey. The goalies are equal parts competitive and supportive, players who “push each other to get better every day and that sends a positive vibe through the entire team,” Halvorson said.

With Butorac, Halvorson and Stumo as examples, the six freshmen on the Huskies’ roster are learning a great deal. Even if Halvorson finds her role hard to believe.

“It’s crazy because people will say, ‘Wow, this is your fifth year playing,’ ” Halvorson said. “But I feel like I’m still a freshman.”