Chloe Corbin powered the Crimson attack with a pair of goals. 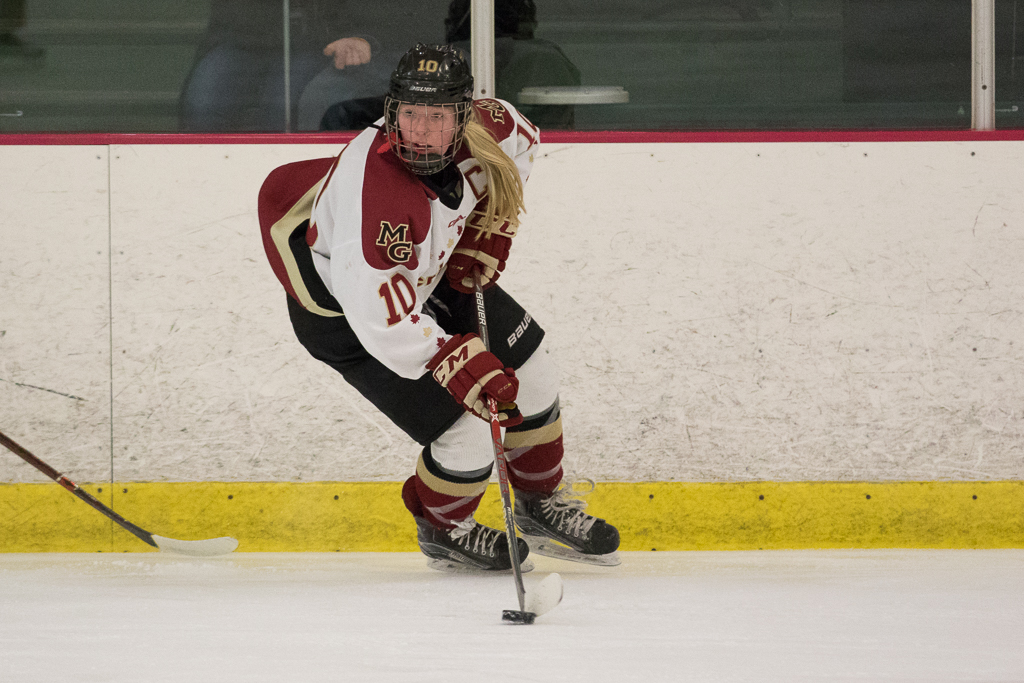 Click photos to view the entire gallery from the game.

After Maple Grove tied Edina 3-3 in late December in the Walser Invitational championship, Crimson junior goaltender Lucy Morgan had faith in her team, which was ranked ninth in the Class 2A coaches’ poll at the time.

“People are talking about Edina as one of the top teams, but I think we should be in that conversation,” Morgan said after the Dec. 28 tilt with the Hornets.

At the time, Maple Grove was riding a seven-game unbeaten streak. Nearly one month later, the No. 5-2A Crimson made sure their success continued Thursday night as they defeated Hill-Murray 3-1 at Maple Grove Community Center, pushing their undefeated streak to 14 games.

As has been the case throughout their streak, holding opposing teams down offensively has been key for the Crimson (15-4-4, 7-3-3). Maple Grove has allowed 1.21 goals per game during its undefeated run. Through the first two periods, the Crimson held the No. 4-2A Pioneers off the scoreboard, with Morgan making 18 saves during the first 34 minutes.

“We have had solid goaltending all year,” said Crimson sophomore forward Chloe Corbin. “We trust in (Morgan) to make the stops when we need her to.”

While Morgan and the Maple Grove defense stymied Hill-Murray (18-4, 7-0), the Crimson found their way onto the scoreboard with some timely offensive play. Corbin opened the scoring on the power play when she pounced on a loose puck in front of the net and put it home.

In the second period, junior forward Mannon McMahon got a goal thanks to a puck bouncing off of a Hill-Murray defender’s skate into the net. This added to her team-leading goal total as she now has 20 this season.

Corbin struck again in the third as she went top-shelf past Pioneer junior goaltender Ava Bailey to give her team back a two-goal lead.

Though McMahon, a University of Minnesota-Duluth commit, has led the way so far, she is just one part of the Crimson offensive attack. Senior forwards Maia Martinez and Katie Denecke have each tallied 12 goals this season while Corbin and freshman forward Lauren Stensile have contributed with six goals of their own.

While Maple Grove was getting timely goals, Hill-Murray struggled to cash in on quality chances. The Pioneers outshot the Crimson 30-19 on Thursday, but Morgan stopped all but one shot. That came in the third period when Hill-Murray standout forward Abigail Noreen carried the puck around the offensive zone and blasted a shot past Morgan.

Noreen’s goal was a rare bright spot in a game where the Pioneers lacked offensive firepower. Hill-Murray came into Thursday’s contest having won 14 of its past 15, but the team’s effort against the Crimson effort left Pioneers coach Bill Schafhauser frustrated.

“Hopefully this is a wake-up call for us,” Schafhauser said. “We need to get our act together pretty quick. We’ve made a lot of progress this year — this would’ve been a good step up for us.”

The Crimson’s latest win is another feather in their cap. Maple Grove has four wins over teams ranked in the top 10 of the Class 2A poll. With the Crimson just two games away from section play, any top-10 win is a plus as they prepare for Class 2, Section 5, which features No. 3-2A Centennial and No. 8-2A Blaine.

“This season, some of our inexperienced girls have gone out and made mistakes, but now they’ve cleaned those up,” said Maple Grove coach Amber Hegland. “They’re coming out every day ready for more challenges. They’re never satisfied.” 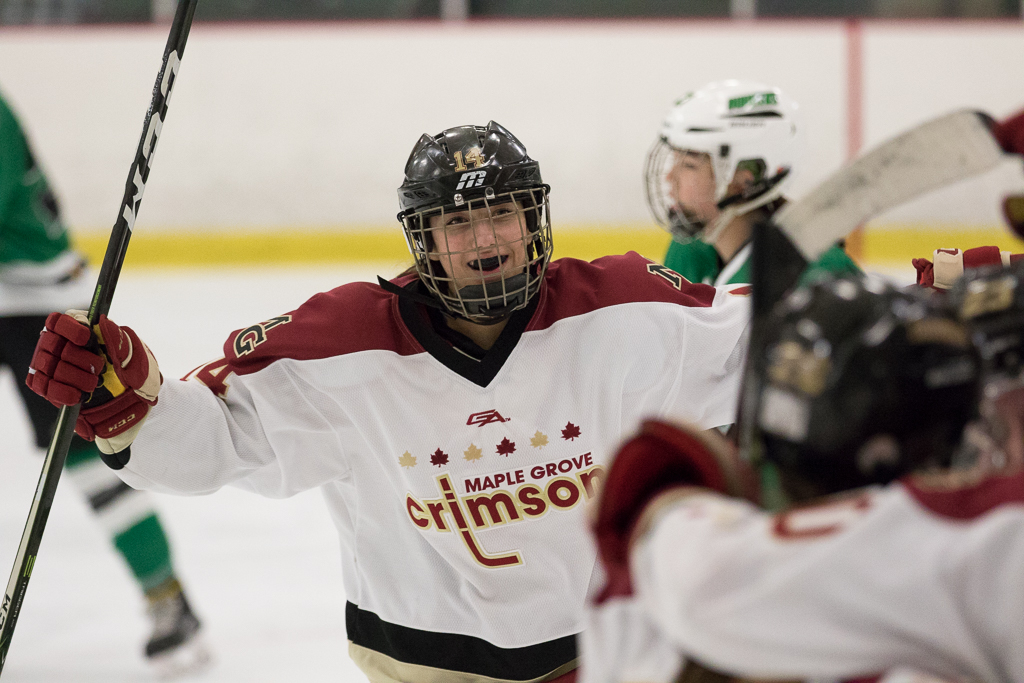 Maple Grove’s unbeaten streak was extended to 14 games on Thursday as the Crimson defeated Hill-Murray 3-1 at Maple Grove Community Center.

For Maple Grove, which is ranked fifth in the Class 2A coaches’ poll, the power play was key for getting its offense going. The Crimson struck first in the opening period when Chloe Corbin knocked in a loose puck more than 10 minutes into the period.

Maple Grove (15-4-4, 7-3-3) extended its lead in the second period with the man-advantage once again when junior forward Mannon McMahon tallied her team-leading 20th goal of the season just seconds into a Crimson power play. Though McMahon has the goal on her record, Maple Grove benefitted from the puck bouncing into the net off a Pioneer skate.

In the third, Corbin and the Crimson struck again, this time it was five-on-five. The sophomore forward tallied her second goal of the contest, and her sixth of the season, when she went top-shelf to beat Hill-Murray junior goaltender Ava Bailey.

The No. 4-2A Pioneers could not crack Crimson junior goalie Lucy Morgan until the third period. Senior forward Abigail Boreen fired a rocket from the right side to beat Morgan and get her team on the board. The University of Minnesota commit now has a team-best 19 goals this season. 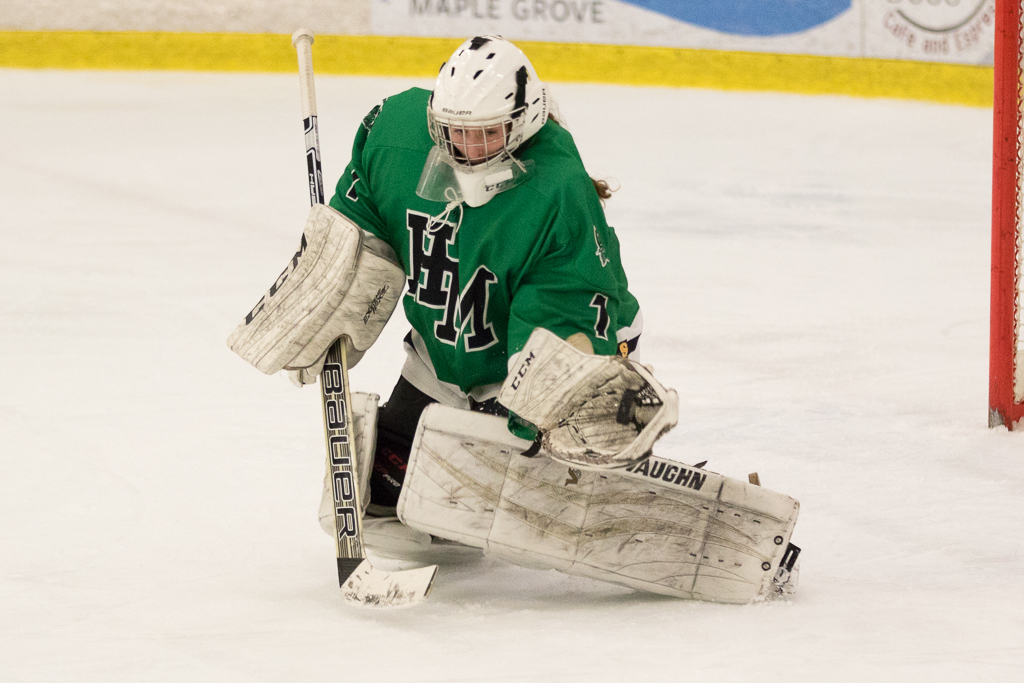