The Hornets scored twice late in the third to break open a tie game and seal the victory. 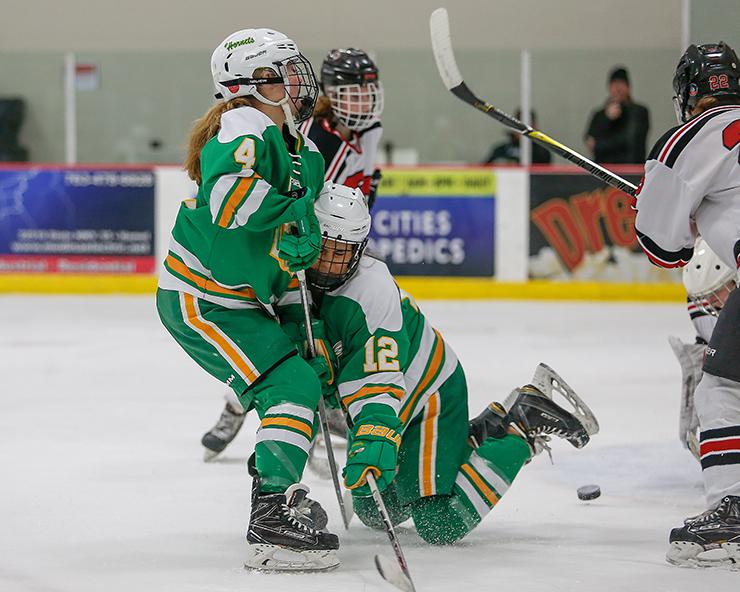 Edina teammates Olivia Swaim (4) and Lolita Fidler (12) collided in a rush on the Eden Prairie net late in the third period. Edina scored twice in the final minutes to secure a 3-1 victory. Photo by Mark Hvidsten, SportsEngine

As the two previous Class 2A state champions, Edina (2017) and Eden Prairie (2016) have rosters filled with veterans who know what it’s like to play in a big game.

On Tuesday, both teams needed its stars to step up as the Hornets and Eagles went head-to-head in the race for the Lake Conference championship.

Both sides had their players do just that. In the end, however, it was Edina’s leaders that had the biggest contributions. Senior forward Aliyah Lance gave the Hornets a 2-1 lead late in the third period and was followed by senior forward Loli Fidler, who put the game out of reach minutes later as Edina went on to defeat Eden Prairie 3-1, claiming the conference crown at the Eden Prairie Community Center.

With both teams coming into this game with one conference loss, Tuesday’s game went a long way in deciding the conference winner. The Eagles came in with a slight advantage as they had defeated Edina, which is ranked No. 1 in the Class 2A coaches’ poll, 4-3 in overtime on Jan. 13.

“With us as rivals historically, this game is a big deal,” Lance said. “Plus, any quality win helps us when it comes to sections.”

In the first period, the Hornets (20-2-1, 7-1) proved they were up to the task by peppering Eden Prairie senior goaltender Alexa Dobchuk with 14 shots. Meanwhile, Edina held its conference counterpart to just one shot in the opening frame.

“We were just moving the puck quickly and using our sticks to keep their bodies away,” said Hornets coach Sami Reber. “That was keeping things in our favor.”

The second period was more favorable for the Eagles. They spent the period being the dominant offensive team and tallied their lone goal thanks to senior defender Crystalyn Hengler. The University of Minnesota commit beat Edina senior goaltender Megan Smith by blasting the puck above her shoulder and into the back of the net.

“She could have a lot more goals, but she tends to pass the puck a lot,” said Eden Prairie coach Jamie Grossman. “If I had a shot like hers, I’d shoot every time I had the puck. But that just shows the type of team player she is. I’ve never seen a female hockey player shoot like her.”

The Eagles’ second-period onslaught came despite senior defenseman Gigi Jacobson leaving the game in her second shift with an injury. The No. 10-2A Eagles had to rely on some less experienced players without Jacobson and some of their passive tendencies showed.

“I think just as a team tonight we didn’t get as many pucks deep as we should’ve,” Grossman said. “I’m not sure if it was nerves but we just weren’t as disciplined as we should.”

Once Edina returned to controlling the play in the third, the Hornets found the net. Lance’s goal came from a long shot from the blue-line. She was able to redirect the puck with a slight tap from her stick to beat Dobchuk, a Colgate commit who has played in net for the Eagles since she was in eighth grade. Shortly after Lance’s eventual game-winner, Fidler made it 3-1.

Lance and Fidler have been offensive forces for the Hornets this season, scoring 17 and 20 goals, respectively, and they have spearhead a ferocious offense that averages 5.65 goals per game with five players with at least 10 goals.

“Our balance is what makes us so special,” Reber said. “We count on everyone, not just one person.”

As Reber pointed out, winning the Lake title was just one of her team’s goals this season. With that out of the way, Edina will finish the regular season with games against Anoka on Thursday and Elk River/Zimmerman on Saturday. After that, the Hornets move onto Class 2A, Section 6 play and a possible date with No. 2-2A Blake in the section final.

Though Eden Prairie (15-8-1, 5-2) has just one game left, it’s an important one. The Eagles wrap up the regular season at Class 2A, Section 2 foe Minnetonka on Saturday. The teams have split their season series thus far.

“Whoever wins this game will probably get the No. 1 seed in the section,” Grossman said. “Tonka has struggled in conference play this year but we know they’ll play us tough. They always do.” 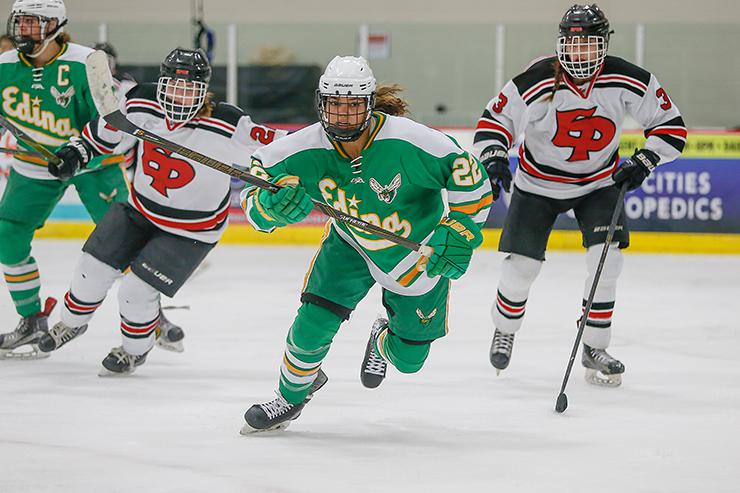 Edina senior Aliyah Lance (22) broke away from the Eden Prairie defense in the third period, when she had a goal and an assist to spark the Hornets' victory. Photo by Mark Hvidsten, SportsEngine

With just under four minutes remaining in the third period at Eden Prairie, Edina senior forward Aliyah Lance tipped in a shot on the power play to give her team a 2-1 lead as the Hornets went on to defeat the Eagles 3-1 to clinch the Lake Conference regular season crown.

Edina, which is ranked No. 1 in the Class 2A coaches’ poll, controlled both the first and third periods in this game between the conference’s top two teams. The Hornets opened the scoring late in the first when junior forward CC Bowlby scored a power-play goal. Edina outshot the No. 10-2A Eagles 14-1 in the opening period.

In the second period, Eden Prairie (15-8-1, 5-2) responded, tying the game 1-1 thanks to a blast from senior defender Crystalyn Hengler that blew past Hornets senior goalie Megan Smith, who made 12 saves in the win.

After Lance gave Edina (20-2-1, 7-1) a late lead, the Hornets got some insurance when senior forward Lolita Fidler scored from the crease to give her team a two-goal lead. Edina was held to a single goal late thanks to the work of Eagles senior goaltender Alexa Dobchuk, who made 30 saves in the losing effort. 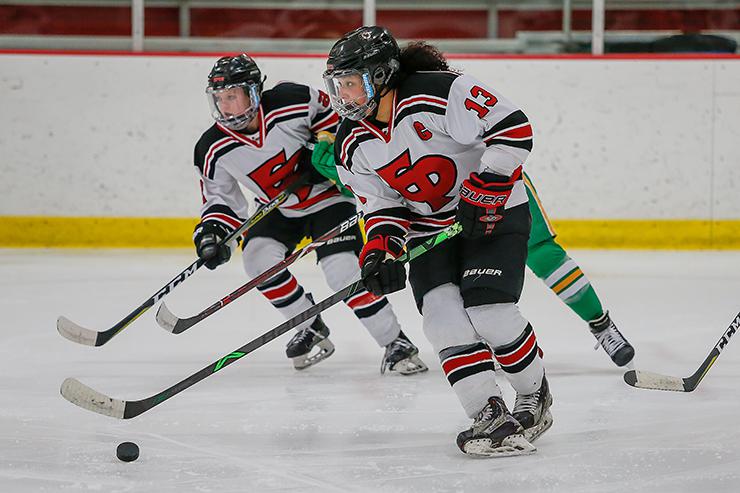 The MN Girls' Hockey Hub polls are for entertainment purposes only.