Sara McClanahan netted a pair of goals as the Bears defeated the Cougars for the second time this season. 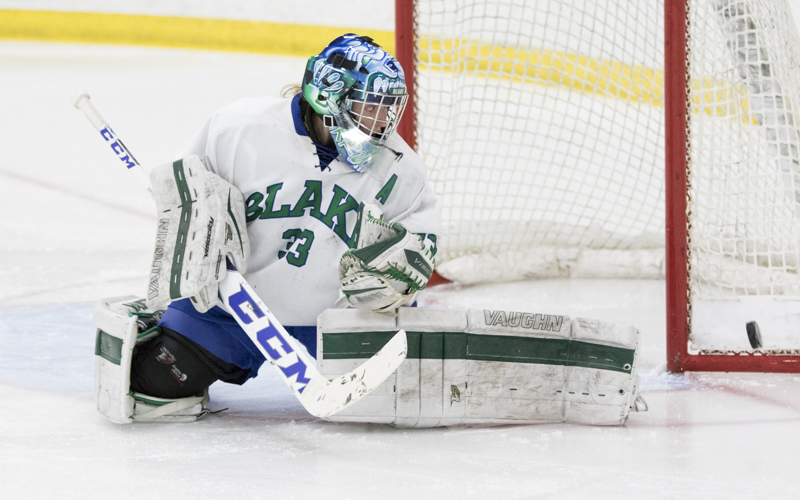 Blake goalie Anna Kruesel follows a Centennial shot as it bounces off the post. Kruesel had 19 saves in the Bears' 3-1 victory over the Cougars Friday night. Photo by Jeff Lawler, SportsEngine

Whenever Centennial hits the ice for a game, there are two forwards that stand out among the rest. Seniors Gabbie Hughes and Anneke Linser have each tallied more than 200 goals in their careers and have combined for 62 this season.

With these two threats going up against Blake on Friday, it left Bears senior goaltender Anna Kreusel worried.

“They’re horrifiying,” Kreusel said. “They’re in complete control of the play. They work so well together and do so many things like drop passes and behind-the-back plays.”

Though Kreusel might have some nerves when it comes to playing against this dynamic duo, it hasn’t shown this season. On Friday, Blake defeated Centennial 3-1 to cap off the regular season. In both meetings, Kreusel combined to allow just one goal against a Cougar offense that averages nearly five goals per game.

Friday marked the final home game for Blake’s seniors, including Kreusel. She has been with the Bears, who are ranked No. 2 in the Class 2A coaches’ poll, since she was an eighth grade and has played on three state championship teams.

“She’s been a brick wall,” said Bears coach Shawn Reid. “We can play some risky hockey at times just because we know how good she is. She’s been absolutely phenomenal.”

While Kreusel was holding down Centennial (21-3-1, 15-0-1), her teammates were able to get things going offensively. Blake (22-1-2, 5-0) scored first while shorthanded in the opening period. Senior forward Sara McClanahan got free with the Bears’ down a player and converted on a wrist shot. McClanahan later tallied her second goal of the game — her 19th of the season — in the third period to give Blake some insurance.

“Anytime (McClanahan) is on the ice she’s a threat,” Reid said. “She battles through just about anything and will win those one-on-one battles.”

Blake knocked off the No. 3-2A Cougars 2-0 on Dec. 30 in the Schwan Cup Gold Division final and the Bears nearly came away with their second shutout of the Cougars this season.

With 14 seconds left in the game, Kreusel’s hopes for a shutout came to an end courtesy of Linser, a Minnesota-Duluth commit who ended her team’s scoring drought against Blake by beating Kreusel on a top-shelf goal.

“You always have to be extra conscious of Hughes and Linser,” Reid said. “They’re incredible players, and if you’re not aware of where they are at all times, they will beat you.”

This game marked the end of the regular season for both teams. This was the second consecutive night Blake matched up against a Northwest Suburban conference team. On Thursday, Blake tied 4-4 on the road with No. 8-2A Blaine.

Following this stretch, both teams will await section play, which begins in a week. While there is a significant layoff coming into the postseason, both teams will need to be ready for some of the state’s fiercest competition. Blake plays in Section 6, which features No. 1-2A Edina and No. 9-2A Wayzata.

Centennial, meanwhile, will compete in Section 5, featuring Blaine and No. 4-2A Maple Grove.

“With so much time off, it’s hard to use our recent games come section time,” Reid said. “We have to try and sustain this momentum in practice. We’ll use competition drills to keep things going.”

Kreusel hardly seemed like she needed motivation after Friday’s win. With the experience she and her teammates have, it’s easy to believe they’ll be ready for the postseason — it’s not only a chance for the Bears to continue their run of excellence, but it’s a chance to show Blake can compete in Class 2A.

“It would be unreal to end this with a championship,” Kreusel said. “I couldn’t think of any better way to cap off my high school career.” 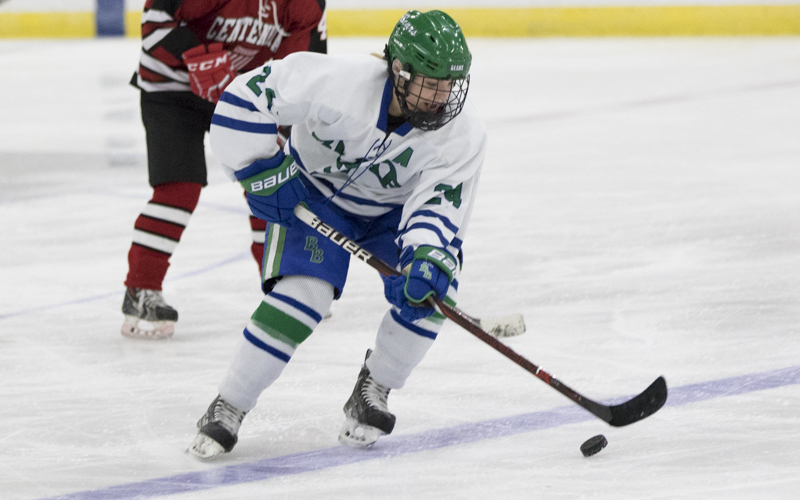 For the second time this season, Blake defeated Centennial as the Bears powered past the Cougars 3-1 at Blake Ice Arena on Friday.

Blake’s first goal came shorthanded as senior forward Sara McClanahan broke free and fired a wrist shot, beating Centennial (21-3-1, 15-0-1) junior goalie Mackenna Stoterau. Less than a minute later, junior forward Izzy Daniel got one past Stoterau for the Bears, who are ranked No. 2 in the Class 2A coaches’ poll, making it 2-0.

Early in the third period, McClanahan scored again as she flipped a backhand shot to add some insurance for Blake (22-1-2, 5-0).

The No. 3-2A Cougars were nearly held scoreless until senior forward Anneke Linser got her team on the board with 14 seconds left in the game. 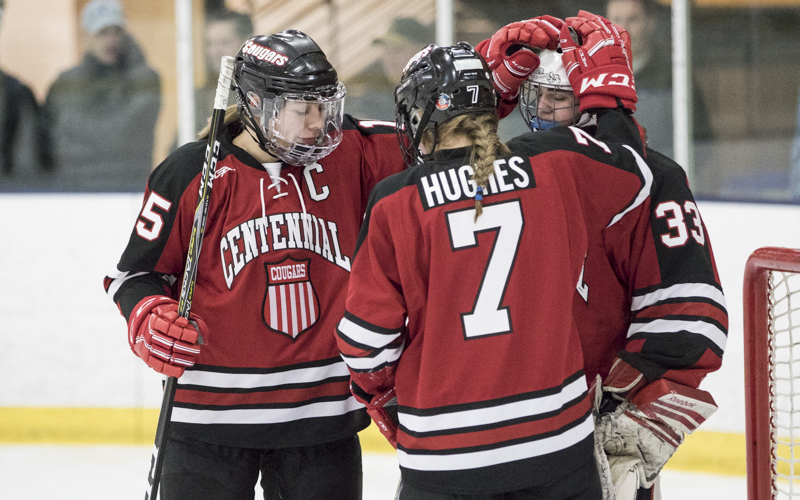 Centennial seniors Anneke Linser and Gabbie Hughes offer encouragement to goalie Mackenna Stoterau after a first-period goal against Blake. The Cougars fell to the Bears 3-1. Photo by Jeff Lawler, SportsEngine