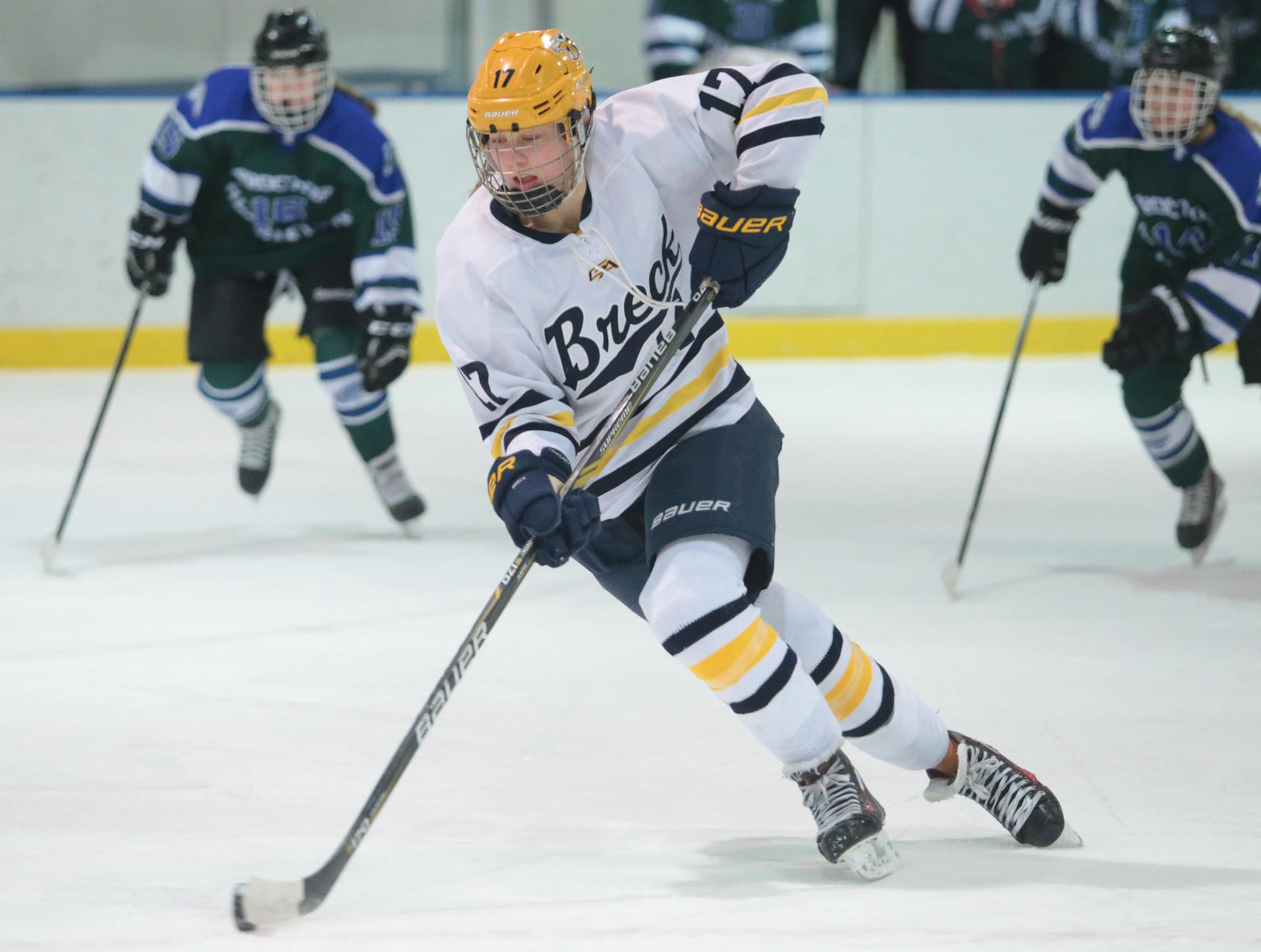 Olivia Mobley was one of five Breck players selected to the Class 1A teams. Photo by Cheryl Myers, SportsEngine

With the Class 1A and Class 2A state tournament champions crowned, it's time to honor some individual players.

The Minnesota Girls Hockey Coaches Association announced the names of its all-state and honorable mention teams for this season. Each team features many of the state's top players, including eight on the rosters of this year's two state champions — Breck (Class 1A) and Edina (Class 2A).

The Class 1A teams feature five Breck players, the most of any small-school program.

Senior forward Gabby Billing (8-33-41) headlines the group of Mustangs on the all-state team, and honor she shares with forwards Katherine Solohub (3-9-12) and Olivia Mobley (32-17-49), the only sophomore named to the all-state team.

Breck junior goalie Ally Frantzick (2.28 GAA, .911 SV) and sophomore forward Ally Qualley (14-17-31) were named honorable mention, and both were key pieces in the Mustangs' run to their second state title and first since 2012.

Some of the Minnesota's top scorers, including New Ulm senior forward Ali Beltz, also garnered all-state honors. The Wisconsin-River Falls commit led the state with 62 goals and 94 points in the regular season.

Warroad senior forward Madison Oelkers, who finished the regular season with 38 goals and guided the Warriors to the Class 1A final, and Warriors junior defender Kaitlyn Kotlowski were also named to the all-state team.

South St. Paul senior Kaity McKenzie was one of two goalies on the all-state team. The Cornell commit and Senior Goalie of the Year award semifinalist posted a 1.30 goals-against average, which was one of the state's best in the regular season.

Though Blake came up one game short of this year's state tournament, the Bears were one of the state's top teams in the regular season and as a result, have a state-best four players named to the Class 2A all-state team.

Blake senior goaltender Anna Kruesel recorded the most regular-season victories (22) in Minnesota and had one of the best goals-against averages (1.26), helping the Amherst commit solidify her place as finalist for this year's Senior Goalie of the Year award — as well as all-state honors.

McClanahan, a senior forward, was second on the team with 21 goals in the regular season, and she heads to Dartmouth as a two-time state champion, winning Class 1A titles in 2016 and 2017 (before Blake moved to Class 2A this season).

Two players from state champion Edina — senior forwards Lolita Fidler and Emily Oden — were named to the all-state team. Both were semifinalists for Ms. Hockey, and Oden was a finalist for the award. Hornets junior forward CC Bowlby was named honorable mention.

Many of Class 2A's top seniors were also selected to the all-state team, including forwards Gabby Rosenthal and Catie Skaja.

Twenty players were bestowed honorable mention honors in Class 2A, including Andover senior forward Claire Butorac. The Minnesota State Mankato commit had 33 assists in the regular season and helped the Huskies to the state consolation championship.

The all-state and honorable mention teams are selected by the Minnesota Girls Hockey Coaches Association using a season-long process.

At the start of the season, coaches nominate players to an all-state selection committee, which includes representatives from the 21-member MGHCA Executive Board. In January, coaches vote for players deserving of the honor, and those names are sent to the MGHCA Executive Board, which narrows the list to create a final ballot. The selection committee receives the ballot and ranks players by position within their classes. From there, committee members discuss the rankings to determine which players will be on the all-state and honorable mention teams.

Players receive the honor based on their work throughout the season. Players nominated must not have committed an Minnesota State High School League violation during that season, and their coaches must be members of the MGHCA.

The selection committee uses several criteria when discussing players, including on-ice talent, sportsmanship/character, and a passion for and commitment to hockey, according the MGHCA website.