Warroad shuts out Breck in road contest to remain undefeated

Quinn Kuntz made 23 saves in net to spark the Warriors' 3-0 victory. 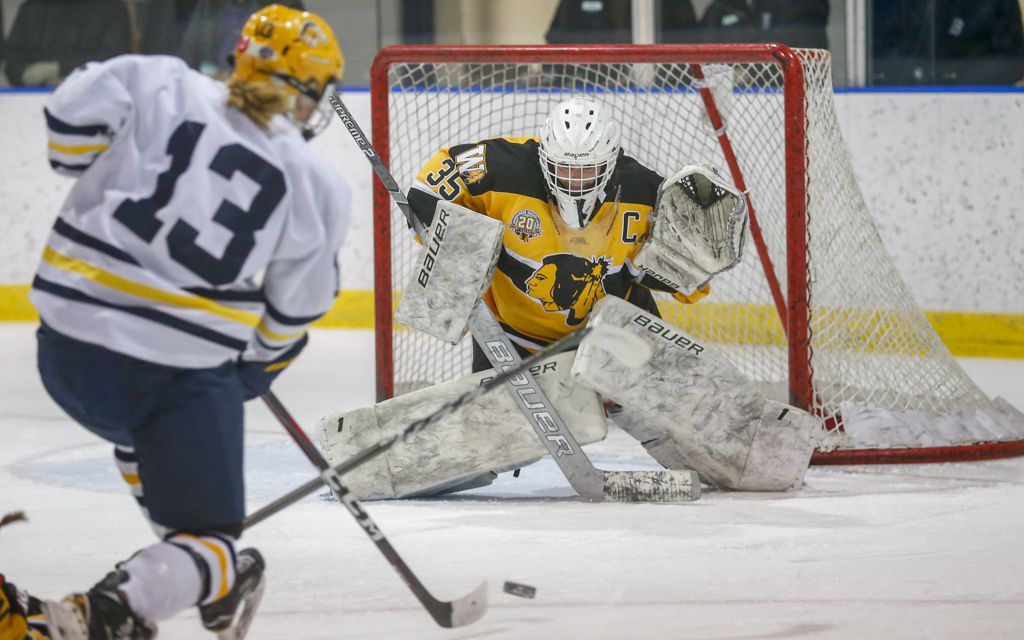 Warroad goalie Quinn Kuntz stares down a shot from Breck's Ashley Halverson. Kuntz stopped all 23 Mustang shots for her fifth shutout of the young season. Photo by Jeff Lawler, SportsEngine 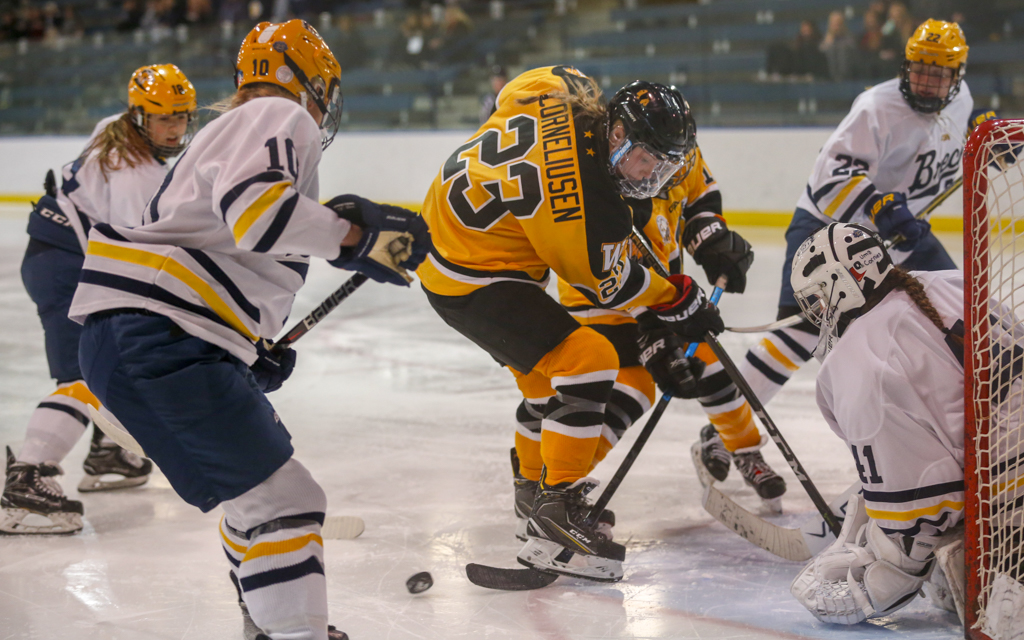 Warroad junior Hannah Corneliusen fights for the puck in front of the Breck net Friday night. In a battle of the top two teams in Class 1A, the Warriors defeated the Mustangs 3-0. Photo by Jeff Lawler, SportsEngine

The celebration suggested Warroad wanted the win badly. After all, beating the team that topped the Warriors in the state championship must have been cathartic.

But the performance in the win — and the performances in the Warriors’ unblemished start to the season — suggests Warroad (6-0, 2-0) might be as good a team as there is Class 1A right now.

Perhaps that’s what’s to be expected from the Warriors now, their coach said.

Friday, Warroad, ranked No. 2 in the Class 1A coaches’ poll, earned a 3-0 road win over No. 1-1A Breck at the Breck School Anderson Ice Arena in a rematch of the 2018 state title game. The Mustangs won that championship, but the Warriors got a measure of revenge this time out.

The team mobbed goaltender Quinn Kuntz after her fifth shutout in six games, and the Warriors made their six-hour bus trip Friday worth the time by putting together a dominant performance.

“We wanted it a lot, meaning we lost back in February,” junior captain Hannah Corneliusen said. “It meant a lot to win.”

Warroad jumped out and controlled the puck and the pace early. The Warriors were faster to the puck and outworked the Mustangs (0-2, 0-0) much of the game. Two goals in the second period put Warroad ahead, and served as a reward for a squad that played with more intensity early on.

“I think that’s what every coach would like in a road game, right?” Warriors coach David Marvin said. “I thought we did a lot of good things tonight. That’s what we say; if we can play like that, we can be a pretty good team. I liked our effort tonight.”

The Warriors have indeed been a pretty good team. They’ve outscored opponents 31-3 thus far, with the three goals they surrendered coming in a 4-3 win over Minnetonka on Nov. 17.

After earning 23 saves in the defeat of Breck, Kuntz has a .975 save percentage. Warroad is also a perfect 24 for 24 on the penalty kill.

Like they have all season, the Warriors largely reined in their opponent.

“We worked hard, made our passes crisp, made sure we were moving it around,” Corneliusen said. “Get lots of shots on net.”

Beating Breck also showcased the Warriors’ depth. The third line produced two goals, with Genevieve Hendrickson and McKenzie Oelkers scoring. Sydney Phaneuf also added a goal, and though points leader Corneliusen (10 goals, four assists) was held off the score sheet, she stood out for her physicality.

“We were looking for more of a complete game from all our lines, and I think we got that tonight,” Marvin said.

Warroad certainly looked like a complete team against Breck — which arguably goes as deep as any other team in the state. And though it was certainly a win the girls wanted, there’s still a long ways to go until the biggest prize is on the line.

“It’s a big win for our team moving forward, but I don’t know that it means anything come February,” Marvin said. “They’re going to be there. We have to get there — we have a tough road. And it’s early. But it’s sure fun. It’s fun to play them.”

The road is dotted with plenty of tough opponents, many of them Class 2A opponents. Nine of Warroad’s 19 remaining regular-season games are against teams currently ranked in the top 20 by the coaches’ association.

The win over Breck didn’t earn Warroad a trophy, but it showed how the Warriors are capable of playing, and that might be worth more than revenge.

“I think it’s maybe a bar-setter for us, like, OK, this is what we expect now,” Marvin said. “Bring it to that level if you can, and we’ll be tough to beat.”

The road team was the victor for the first time in the last five years of the Breck-Warroad regular-season series.

Warroad, ranked No. 2 in Class 1A by the coaches’ association, earned a 3-0 win over No. 1-1A Breck Friday night at the Breck School Anderson Ice Arena, as the Warriors used a two-goal second period to upend the reigning state champion.

Warroad largely controlled the first period, outshooting Breck 16-5, but neither team was able to find the back of the net.

McKenzie Oelkers added a score late in the third, and Quinn Kuntz made 23 saves in goal for the shutout. Breck’s goalie, eighth-grader Uma Corniea, made 40 saves.

The game was a rematch of last season’s state championship, where Breck won 3-2 in overtime over top-seeded Warroad. To add to the matchup’s history, the teams have played in the regular season each year since 2013, with the home team winning the previous five matchups. 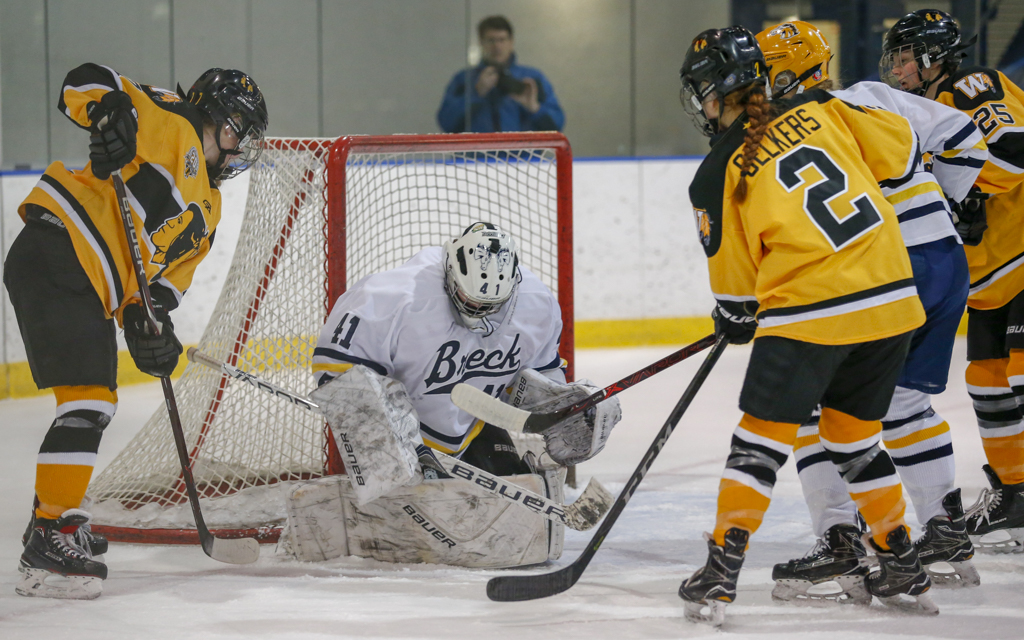 With a crowd around the net, Breck goalie Uma Corniea makes a save against Warroad. Corniea stopped 40 of 43 shots in the Mustang's 3-0 loss to the Warriors. Photo by Jeff Lawler, SportsEngine