With the win, the Warriors have won four straight games and advance to the semifinal round at the Walser Invitational. 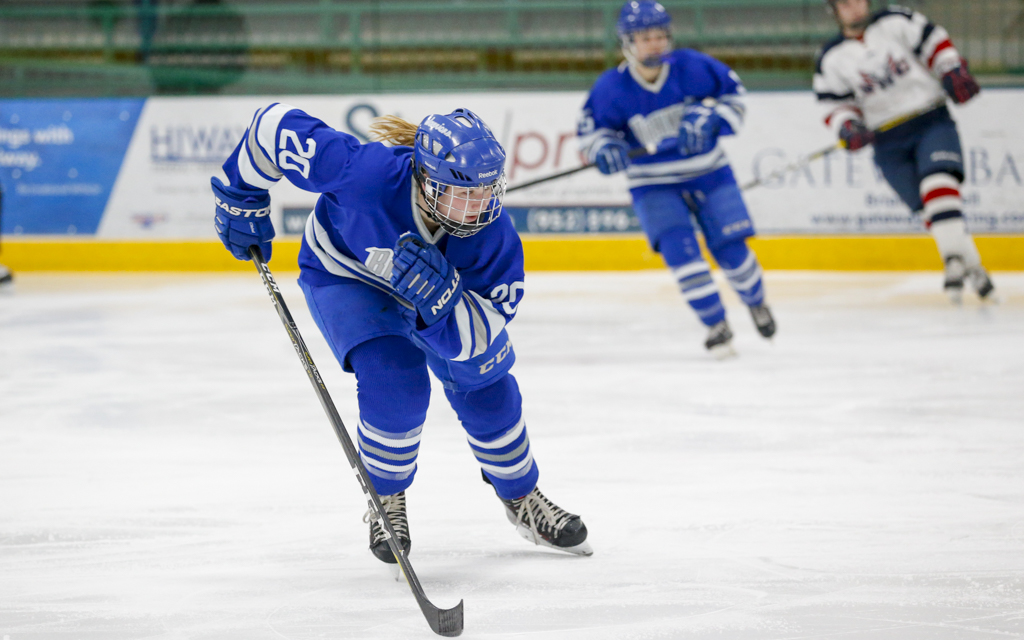 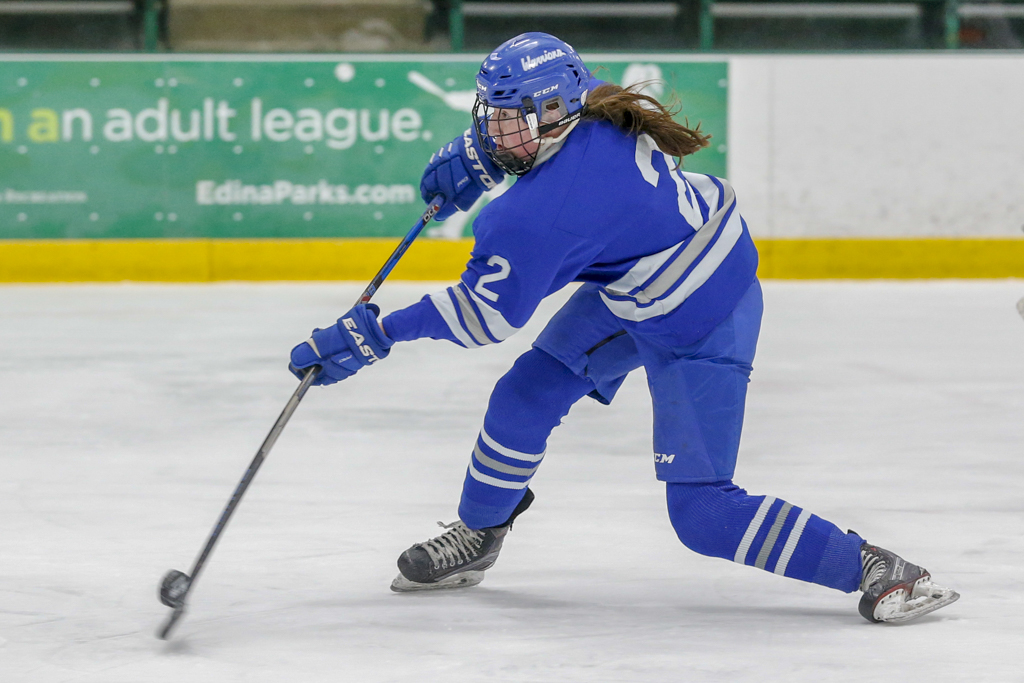 Brainerd/Little Falls senior Ella Kalusche breaks in on a rush against North Wright County Wednesday afternoon. Kalusche had a goal for the Warriors in their 3-2 victory over the River Hawks. Photo by Jeff Lawler, SportsEngine

Brainerd/Little Falls, ranked No. 10 in the Class 2A coaches’ poll, pushed its winning streak to four games with a 3-2 victory over No. 16-2A North Wright County in the quarterfinals of the 12th annual Walser Girls Hockey Invitational on Wednesday at Braemar Arena in Edina.

Even though they played a little more than a week ago with a similar score, the games didn’t feel all that similar to Warriors senior goaltender Olivia King.

“I think it took us a while to get into it,” King said. “Usually our first period’s a little rough, and definitely after Christmas.”

Indeed, it was the River Hawks that struck first for a 1-0 lead about midway through the first period on a goal off the rush. It came from their top line, as Chloe Finnerty found a juicy rebound in front that she shot into the empty net with King out of position from the initial save. Finnerty’s linemates Sydney Lemke and Mackenzie Bourgerie got the helpers on her sixth goal of the season.

A few minutes later, with 5 minutes, 36 seconds to play in the period, Brainerd evened the score with a power-play goal from senior Olivia Wiskow, her fourth tally of the year. Her top-shelf shot as she strolled through the slot clanked iron before falling into the back of the net to tie the game 1-1.

The Warriors seemed to hold a little momentum for the rest of the period, gaining some scoring chances but the teams skated into the first intermission knotted at one goal apiece.

Brainerd took a 2-1 lead in the middle of the second period as senior Ella Kalusche accepted a quick pass in front from junior Gabbie Smith. The goal came after some hard work to cycle the puck in the Warriors’ offensive zone. The River Hawks had a few solid scoring chances on a couple power plays later in the period but were unable to cash in; they finished 0-for-4 for the game on the power play.

Just 1 minute, 3 seconds into the third period, the Warriors grabbed a two-goal cushion on a rebound-goal from Abby Pohlkamp, her 12th of the season. The initial shot rang the pipe before Pohlkamp fired the puck home.

A few minutes later, the River Hawks got back within one with an unassisted goal from Mackenzie Dunn. It remained 3-2 as North Wright County kept the pressure on for the rest of the game, outshooting the Warriors 13-5 in the third period.

“We kind of got away from simple things like getting the puck deep a little bit and making it a little bit tougher on ourselves,” said Warriors coach Jim Ernster. “Olivia was there every step of the way. If we had a turnover, she made a timely save.”

The Warriors were able to mostly shut down the top trio from North Wright County – Bourgerie, Lemke and Finnerty – that are among state leaders on the offensive stat sheets. Junior Lindsey Booth, senior Cheyenne Abear and Pohlkamp were matched up against them for part of the game.

“All of our lines did a really good job of backchecking,” Ernster said.

Bourgerie came into the game leading the state with 41 points, while Finnerty leads with 29 assists.

“It definitely felt good, because they’re more of an offensive line,” said Booth, who leads her team with 23 points this season. “Being able to shut them down in our zone is what we take pride in as a team.”

Brainerd/Little Falls, ranked No. 10 in the Class 2A coaches’ poll, pushed its winning streak to four games with a 3-2 victory over No. 16-2A North Wright County in the quarterfinals of the 12th annual Walser Girls Hockey Invitational on Wednesday at Braemar Arena in Edina.

The Warriors (10-2-1, 5-0-0) gave up the first goal but scored the next three on en route to beating the River Hawks (10-4-0, 4-1-0), a team they defeated 4-2 on Dec. 18 in Brainerd. Three different goal scorers, including senior forward Abby Pohlkamp, contributed to the scoresheet for Brainerd. Pohlkamp's tally — the game winner — was her 12th of the season. 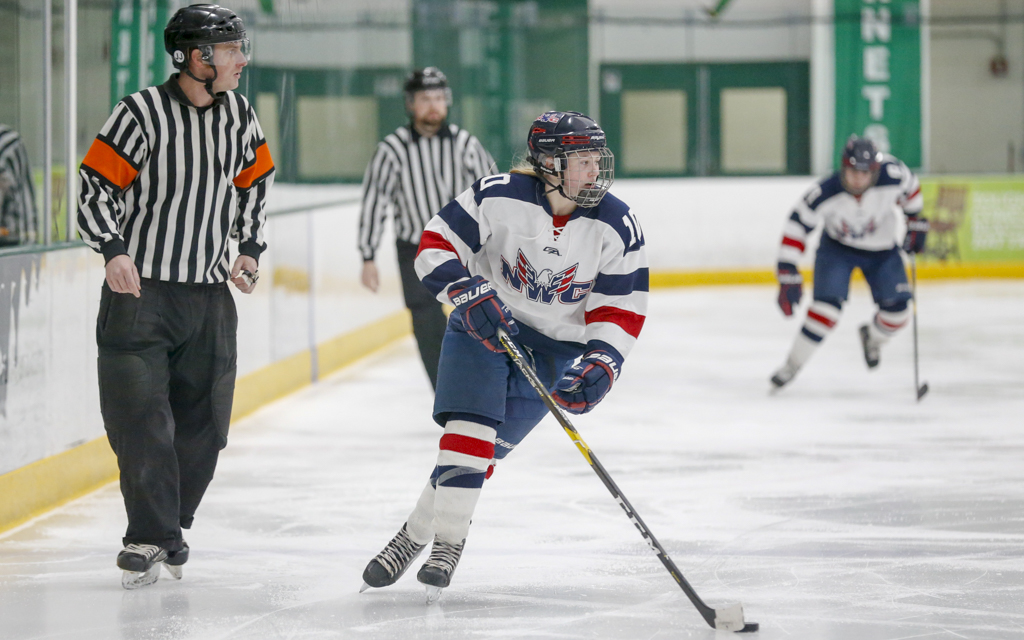 North Wright County's MacKenzie Bourgerie looks for a teammate as she crosses the blue line against Brainerd/Little Falls. The River Hawks fell to the Warriors 3-2. Photo by Jeff Lawler, SportsEngine