The Mustangs were down 1-0 after two periods when five goal scorers pelted the Lightning to earn the win in the third. 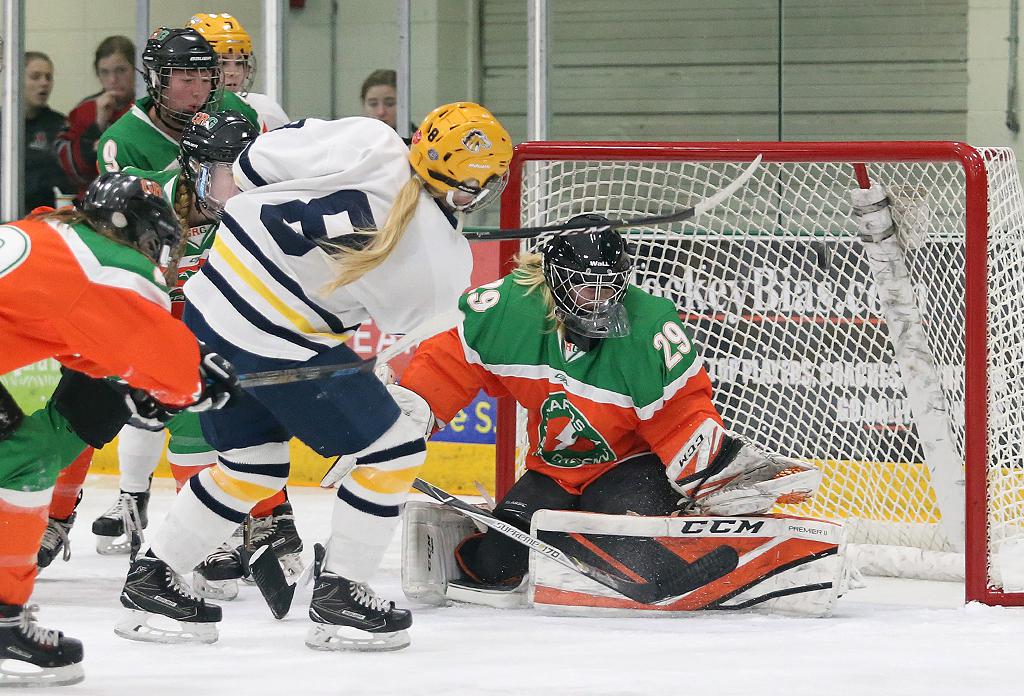 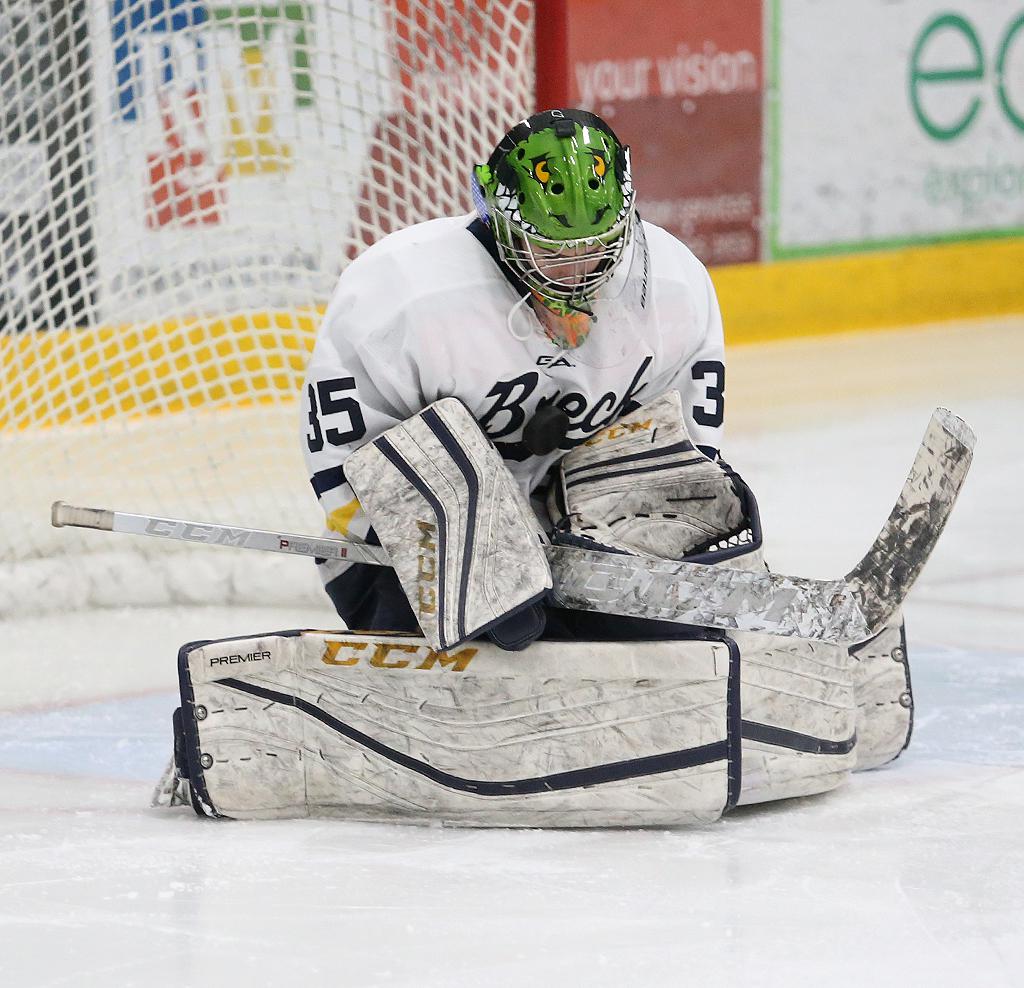 Breck goaltender Ally Frantzick gets in front of the puck. Frantzick tallied 25 saves in the Mustangs' 5-2 come-from-behind win over the Lightning at Braemar Arena in Edina. Photo by Cheryl Myers, SportsEngine

Breck was 0-for-3 on the power play and down 1-0 through two periods against Grand Rapids/Greenway. The advice from the Breck coaching staff at the second intermission was positive and simple.

“We didn’t have a bad second period, I don’t think,” said Breck coach Keith Radloff. “We just kind of told them to continue it and increase the shots, keep going to the net and don’t give up.”

Nothing out of the ordinary for hockey advice, but the result was extraordinary as Breck scored five third-period goals — including the tying and go-ahead goals in just a 22-second span — for a 5-2 win over Grand Rapids/Greenway, ranked No. 8 in the Class 2A coaches’ poll, in Wednesday’s quarterfinals of the 12th annual Walser Girls Hockey Invitational at Braemar Arena in Edina. 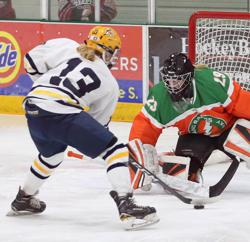 The defending Class 1A champion Mustangs handed the Lightning (12-2) just their second loss of the season in what Breck junior forward Olivia Mobley described as an aggressive and competitive game.

After trailing 1-0 on a goal from Lightning sophomore Claire Vekich, the No. 2-1A Mustangs continued to put the pressure on in the third. Breck’s Ashley Halverson tied the game at the 3:08 mark of the third after getting a pass in front from Carly Beniek. But the Lightning responded by re-taking the lead with a power-play goal just two minutes, 39 seconds later when Maddie Drotts fired the puck in the net after it bounced in the air and Breck goalie Ally Frantzick didn’t know where it went.

Breck (10-3, 1-0) got a power play of its own and finally cashed in, tying the game once again just 1 minute, 14 seconds after giving up a goal. Mobley took a shot from the point and senior defender Katherine Solohub was in front to tip it home.

It was a play Mobley didn’t have to feel bad about this time.

“On the first power play, I shot it from the point and I hit (Solohub) in the head,” Mobley said. “And I felt really bad. So I was trying to really focus on not hitting her in the head.”

The score making it 2-2 gave the Mustangs a lot more energy, Radloff said, as evidenced by Sadie Lindsay’s go-ahead goal just 22 seconds later. Everyone “was jazzed” after the second goal, Lindsay said.

“The adrenaline kind of carried me through the third goal,” Lindsay said.

The Mustangs took a 3-2 lead with 9 minutes, 37 seconds to play and never looked back. Shae Messner made it 4-2 with 3:42 remaining before the Mustangs added their second power-play goal with 1:32 left, a shot from eighth-grader Ava Lindsay.

Five Breck players finished with multi-point games, led by team-points-leader Mobley’s three-assist effort. Beniek had a pair of assists, while Messner and Ava and Sadie Lindsay each added a goal and assist.

Seeing the floodgates open for a cluster of goals has been a bit of a pattern for Breck this season, according to Mobley, who’s committed to Quinnipiac.

“After we get the first, second goals, they just keep coming,” Mobley said. “We stayed positive. Once we get one or two though, we’re flying.”

The third period was a far cry from the first two evenly played periods. It was scoreless after one with the Lightning holding a slight edge in shots, 9-8. Breck ended up outshooting Grand Rapids/Greenway 33-27 for the game, with 16 third-period shots after a combined 17 in the first two periods.

“We tried to continue to get our kids to play as deep in the zone as we could to see if we could do something to get their (Grand Rapids/Greenway) defense a little bit spread out so we could get some opportunities,” said assistant coach Steve Persian. “The reality was that game could’ve gone either way.”

The opportunities arose, and the Mustangs took full advantage. Breck finished 2-for-5 on the power play and 2-for-3 on the penalty kill.

In goal, Frantzick made 25 saves for Breck while junior Emily Trast stopped 28 shots for the Lightning.

Breck was 0-for-3 on the power play and down 1-0 through two periods against Grand Rapids/Greenway. But the Mustangs came out for the third like a team that was behind and needed to find a way to score.

It may sound simple, but it worked out quite well.

After junior forward Ashley Halverson tied the game at the 3:08 mark of the third, the Mustangs scored a pair of goals 22 seconds apart – one on the power play – to grab a 3-2 lead with 9 minutes, 37 seconds to play. They added two more and the result was a 5-2 win for Breck, ranked No. 2 in the Class 1A coaches’ poll, over No. 8-2A Grand Rapids/Greenway in the quarterfinals of the 12th annual Walser Girls Hockey Invitational on Wednesday at Braemar Arena in Edina.

With five third-period goals from five different players, Breck (10-3, 1-0) handed the Lightning (12-2) just their second loss of the season. Olivia Mobley, a junior forward, assisted on three of the scores.

Forwards Claire Vekich and Maddie Drotts scored for the Lightning. 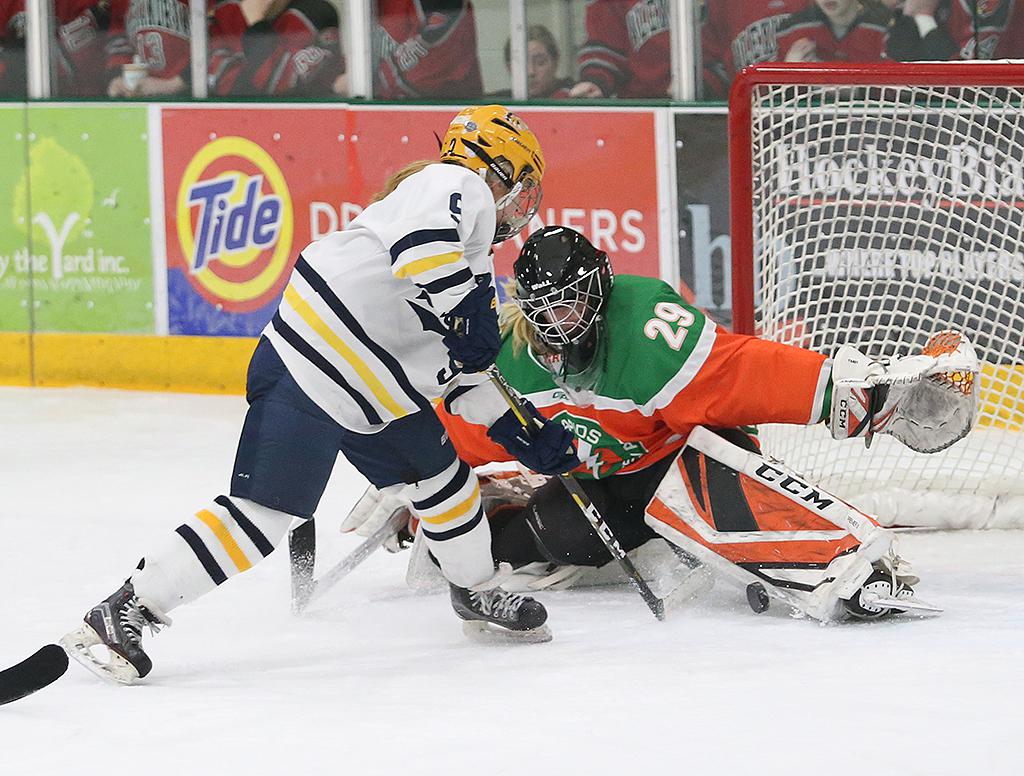 Emily Trast (29) stretches for the save late in the third period. Trast and the Lightning held the Mustangs scoreless through two periods in a 5-2 loss on Wednesday night. Photo by Cheryl Myers, SportsEngine