King scores twice, including the OT winner, for Elk River against Cambridge-Isanti

Senior center Kelsey King increased her state-leading season total to 40 goals while guiding the Elks past the Bluejackets. 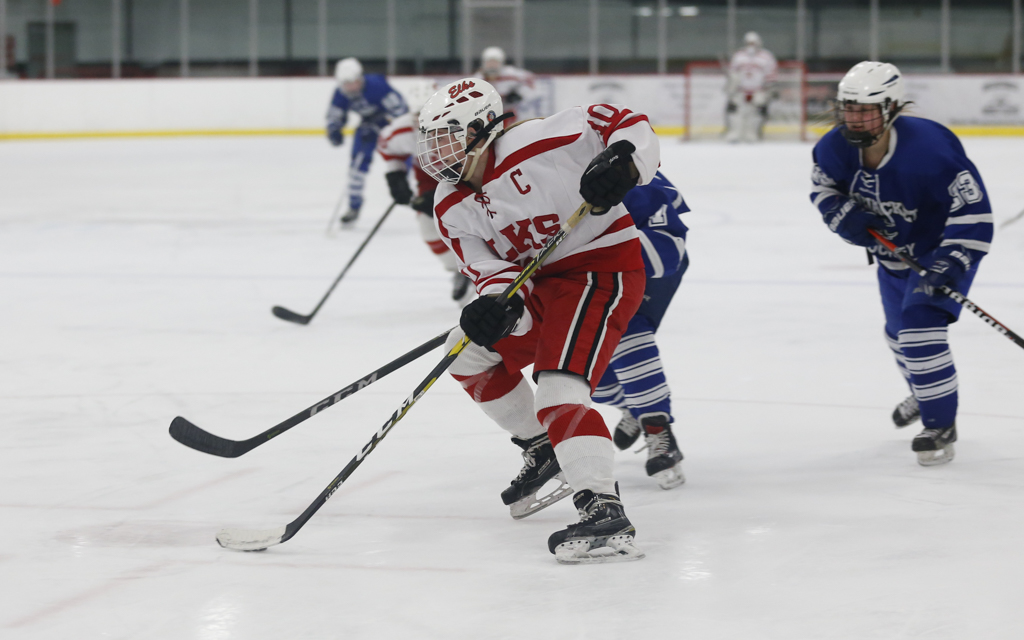 Elk River's Kelsey King gets behind the Cambridge-Isanti defense for a scoring chance in the second period. King scored twice for the Elks including the game-winner 12 seconds into overtime Tuesday night. Photo by Jeff Lawler, SportsEngine 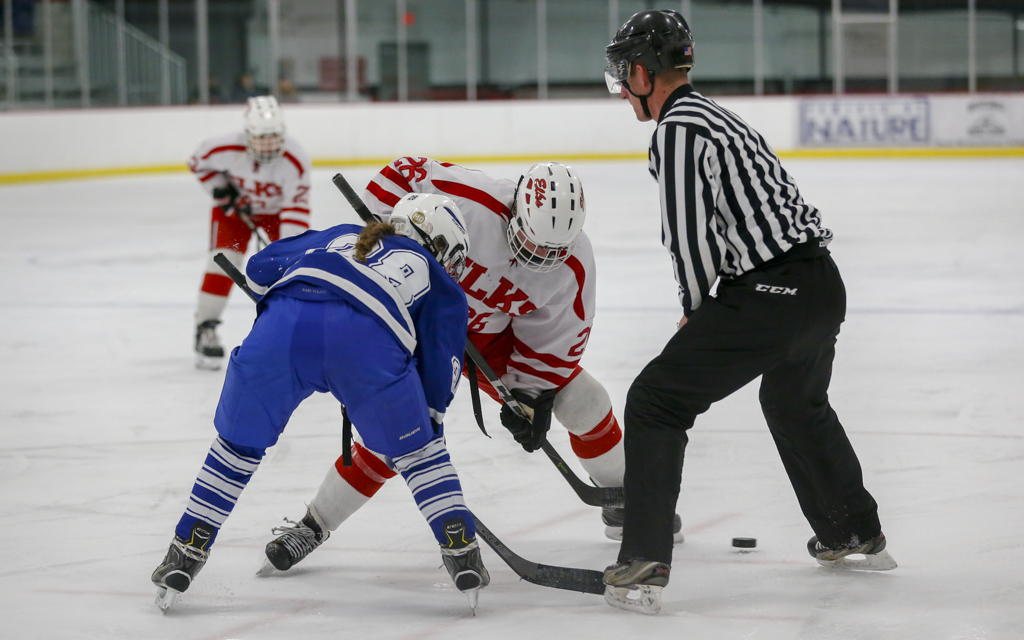 Elk River's Madelyn Christian wins a faceoff against Cambridge-Isanti Tuesday night. Christian had a goal and an assist in the Elks' 3-2 overtime win over the Bluejackets. Photo by Jeff Lawler, SportsEngine

Elk River/Zimmerman senior Kelsey King is the state’s leading goal scorer. She just has a knack for it, according to her coach, Brian Ballenger.

King scored her state-leading 40th goal of the season just 12 seconds into overtime to give Elk River a 3-2 victory over Class 2A, Section 7 rival Cambridge-Isanti/Mora/Pine City on Tuesday at Elk River Ice Arena.

“I was kind of just hovering in front because I saw Maddy (Christian) in the corner with it, and I know she’s a really good playmaker,” King said. “So I kind of waited for her to pick it up, and then I saw the opportunity, then I came down the slot and she gave it to me.”

The quick, game-winning goal was her second tally of the night. King, a senior center and co-captain committed to Minnesota State Mankato, also got her team on the board with her ninth power-play goal of the season just 1 minute, 51 seconds into the second period to cut into a 2-0 deficit. King rang a top-shelf shot off the iron and into the back of the net on the glove side for goal No. 39.

King now has 60 points this season, also at the top of the state leaderboard. She’s only had one game this season without a point, and that was in a 7-0 shutout loss to section rival Andover on Jan. 12.

Her success this year is everything that she’s worked for, King said.

She’s shattered her marks from last season when she led the team with 22 goals and 32 points in 25 regular-season games.

Ballenger said he isn’t surprised at all to see King among the state leaders in scoring this season. He felt she was one of the best players in the state last year as well, even if the points didn’t show it.

“Kelsey, and I said it from almost Day 1, she’s got a knack,” Ballenger said. “She’s really spent a lot of time shooting the puck, and she can shoot. She’s had the knack of it going in the net this year.”

Tuesday’s game marked the eighth time this season the Elks (14-6-3, 9-3-3) have played overtime, and their third game in a row going to an extra session. They’re 4-1-3 in overtime games this season. King also scored the overtime game-winner in a 3-2 win over Roseville on New Year’s Eve. But King said her goal against a section rival like the Bluejackets is more exciting.

“They came to play, and we didn’t,” Ballenger said. “We just didn’t have that same step.”

The Bluejackets put on a little more pressure in the scoreless third, outshooting the Elks 14-8, but couldn’t capitalize. That was thanks in large part to Elks senior goaltender Megan Jung, who stopped 36 shots and kept the Bluejackets at bay most of the night, despite the two goals allowed. She improved to 12-6-3 on the season.

“She’s a goaltender that doesn’t get nearly enough credit,” Ballenger said. “Obviously Kelsey gets all the credit from scoring goals. Without Megan, we don’t win most of our games.” 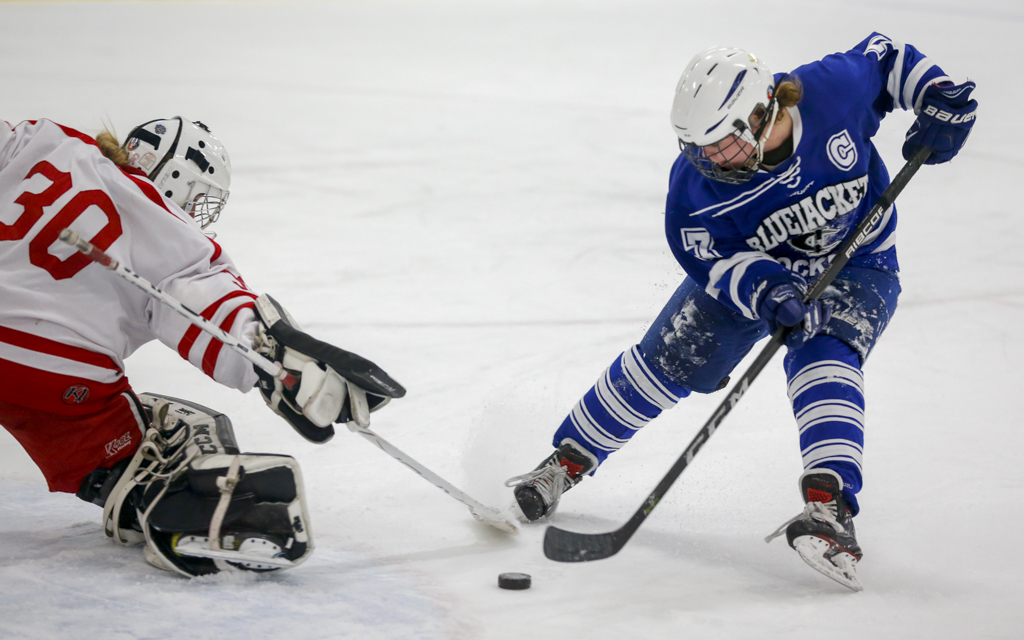 Cambridge-Isanti's Madelyn Skelton pulls the puck around Elk River goalie Megan Jung for a penalty shot goal late in the first period. Despite Skelton's two goals, the Bluejackets fell to the Elks 3-2 in overtime. Photo by Jeff Lawler, SportsEngine

There’s a good reason why Elk River/Zimmerman’s Kelsey King is the top goal scorer in the state. Put simply, she knows what to do with the puck.

King was camped out front and made no mistake scoring the overtime winner just 12 seconds into the extra session to give Elk River a 3-2 overtime victory over Cambridge-Isanti/Mora/Pine City in a clash between Class 2A, Section 7 rivals Tuesday at Elk River Ice Arena.

The Bluejackets (15-6, 8-1) took a 2-0 lead on a pair of goals from the team’s leading scorer, junior center Madelyn Skelton (one was a penalty shot), and outshot the Elks 16-5 in the first period.

Elk River (14-6-3, 9-3-3) countered in the second by outshooting its opponent 17-8 and tying the game 2-2. King, a senior center, got the Elks on the board with a top-shelf shot for her ninth power-play goal this season, which was her 39th goal of the year. Freshman Madelyn Christian tied the game with 1 minute, 3 seconds left in the second period on a high shot from the slot.

King also had a hat trick and a pair of assists when the Elks defeated the Bluejackets 5-1 in last year’s section quarterfinals.

With a victory in their regular-season home finale, the Elks improve to 4-1-1 in their past six games.

The loss snaps a four-game winning streak for the Bluejackets.