Goals by Katherine Flynn and Lauren Beaubien gave the Raptors a 2-0 victory in the Class 2A, Section 3 final. 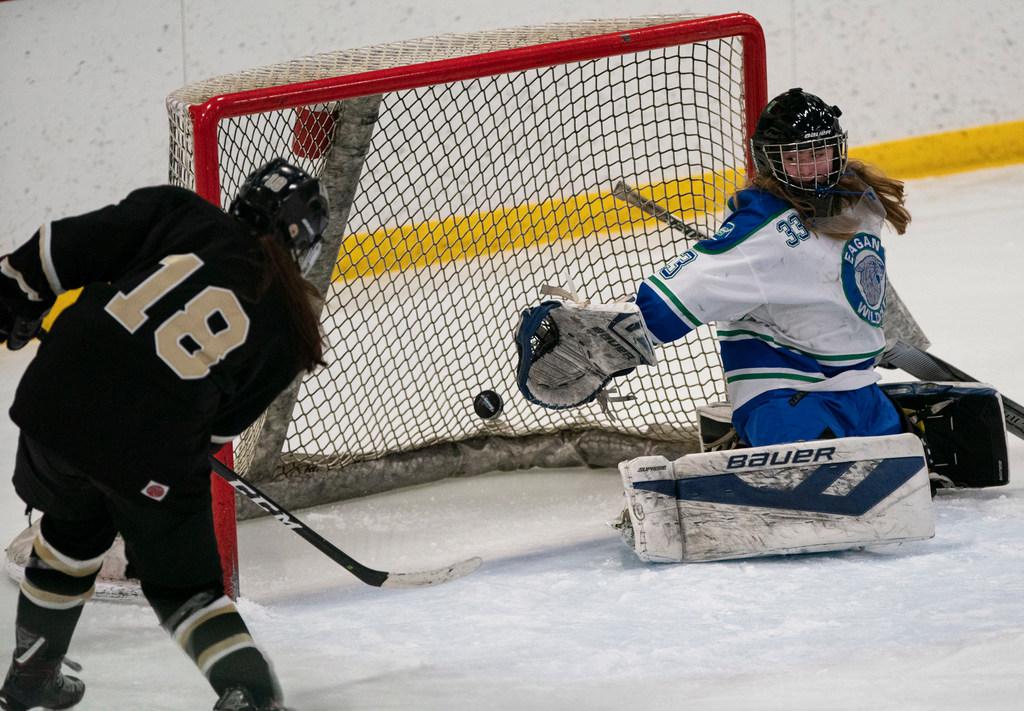 The East Ridge girls’ hockey team is headed to its first state tournament next week.

The Raptors upset section top seed Eagan 2-0 in the Class 2A, Section 3 final on Wednesday at the Veterans Memorial Community Center in Inver Grove Heights to propel them to their first state tournament since the school was started in 2009.

“It’s something we’ve all dreamed about forever and I’m too excited, I don’t know what to say,” East Ridge senior forward Katherine Flynn said. “One of my teammates told me, ‘Guys we just made history.’ And I was like, ‘Huh, I guess you’re right.’ It didn’t dawn on me that we would.”

For much of the first period, it looked like Eagan (19-7) was too much for No. 3 seed East Ridge (17-8). The Wildcats outshot the Raptors 12-2 but East Ridge and goaltender Emerald Kelley weathered the offensive pressure. The Raptors scored on a goal off Flynn's stick with just under 7 minutes left in the period.

The momentum shifted later in the period when Eagan freshman forward Maria Cooper wrapped around the net and shot the puck. The crowd roared as if it went in, and the band started playing, but the officials got together and called it no goal.

“It just didn’t seem to go our way, we feel like we got a goal taken away from us, and whether that would have been a momentum changer or not,” Eagan coach Dan Wilson said. “Things just weren’t going our direction that period.”

East Ridge seemed to settle in during the second period, when it outshot Eagan 8-5 and got its second goal on a back-door rebound from sophomore forward Lauren Beaubien.

“We thought they would come out very strong, and well obviously they did, 12-2 shots. But then throughout the game we wore their first line out,” Beaubien said.

The Raptors held firm in the third period, allowing just one shot in the first 10 minutes.

Kelley shut out high-scoring Eagan team with 21 saves. Kelley and the special teams unit also killed off three Eagan power plays while East Ridge had none.