See which five seniors were honored. 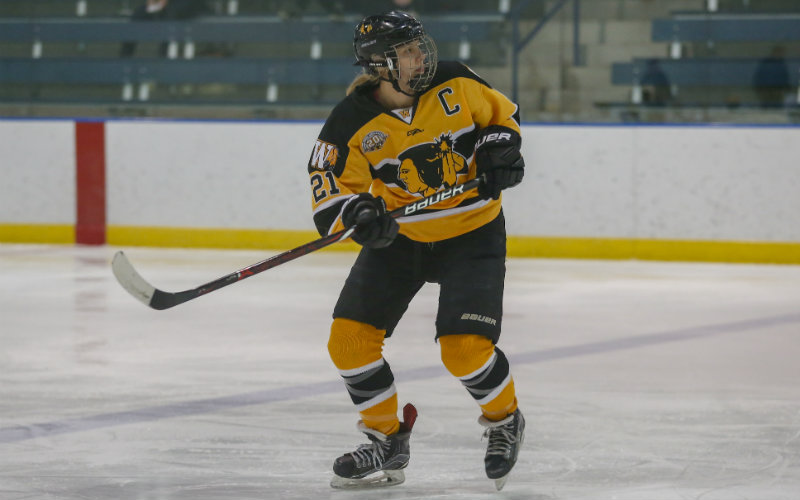 Warroad's Kaitlyn Kotlowski (pictured) is one of five finalists for the 2019 Ms. Hockey award. The senior defender has tallied 12 goals and 29 assists for the Warriors, who went undefeated in the regular season. Photo by Jeff Lawler, SportsEngine

The five finalists for this year’s Ms. Hockey Award were announced by Let’s Play Hockey today.

Kotlowski, a defender committed to Wisconsin, helped power Warroad, ranked No. 1 the Class 1A coaches’ poll, to an unbeaten regular-season record and a 16-0 throttling of Detroit Lakes in the first round of the Class 1A, Section 8 playoffs last Saturday. On the season, the Warriors captain has 12 goals and 29 assists.

Blake, which lost just two regular-season games, is the only school to have two representatives on the finalist list in Daniel and Wethington. Daniel finished the regular season No. 2 in points for the No. 1-2A Bears, with 25 goals and 32 assists, while Wethington registered 20 goals and 49 points, good for fourth.

Each finalist is committed to playing for a Division I collegiate program next year, and three will skate for programs in the Western Collegiate Hockey Association (WCHA). Criteria for choosing a winner includes on-ice performance, academics, extracurricular and community activities, coachability and citizenship.

The winner of this year’s Ms. Hockey award will be announced at the Ms. Hockey Awards Banquet at the St. Paul RiverCentre on Sunday, Feb. 24.

See the table below for more information about each player.