Andover rolls past Farmington in first 2A quarterfinal

The second-seeded Huskies built a 4-0 lead in the first period and cruised to a 7-1 victory. 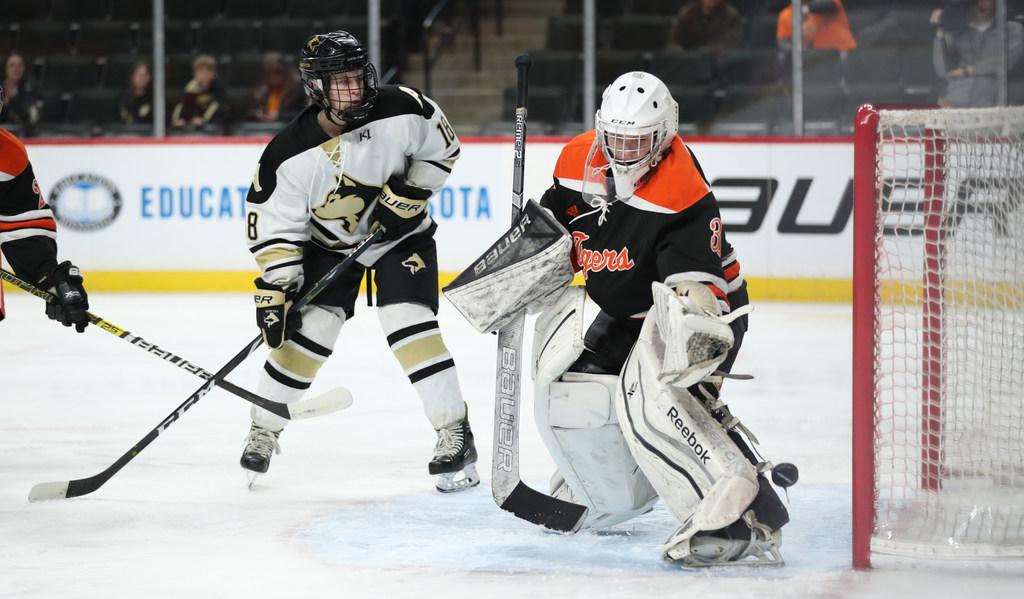 The puck got past Farmington goalie Ryleigh Furlong (31) after a shot by Andover's Jamie Nelson in the first period while Gabby Krause (18) waited for a rebound. Photo: Shari L. Gross • shari.gross@startribune.com

The No. 2 seed in Class 2A scored four goals in the first period en route to a 7-1 victory against Farmington (15-12-2) in the first quarterfinal Thursday at the Xcel Energy Center in St. Paul.

“We started off fast and and then we just started pressuring the puck,” Huskies forward Gabby Krause said. “We just had a good vibe on the bench.”

Andover (24-4-0) got the scoring started on forward Jamie Nelson’s back door goal from Peyton Hemp with just under six minutes gone in the period. Then Krause scored the next two goals to put Andover ahead 3-0. Freshman Madison Kaiser scored with 13 seconds left to make it 4-0. Meanwhile, the Huskies held the Tigers to three shots on goal in the period.

“We hear a lot about our forwards, because obviously we have some very elite forwards,” Andover coach Melissa Volk. “But our ‘D’ do a wonderful job, and a lot of times our offense starts on the backside there with forcing turnovers and getting pucks moving up ice.”

Farmington’s Jenna Gerold scored in the third period for the Tigers’ only goal. Tigers goaltender Ryleigh Furlong made 31 saves.

“Their shots weren’t anything that I haven’t seen before because we faced Blake and we faced Maple Grove,” Furlong said. “So it wasn’t out of the ordinary, but I think it was more of a frustration for the whole team.”

The Huskies built a 4-0 lead in the first period. Jamie Nelson scored a back door goal assisted by Peyton Hemp with 11:12 left in the period. Sophomore forward Gabby Krause scored the next two goals to put the Huskies ahead 3-0. Freshman defenseman Madison Kaiser scored with 13 seconds left in the period.

The Huskies converted on both of their power plays in the second period. Goals from freshman forward Sara Kaiser and junior defense Elisebeth Tammi gave the Huskies a 6-0 lead.

Later, Hemp, a sophomore forward, scored her first goal and fourth point of the game to give Andover a 7-0 lead at the end of the second period.

Farmington’s Jenna Gerold got the Tigers' only goal with 12:32 to play in the third period.

Farmington has three seniors on its roster and three underclass players with verbal commitments to Division I programs.