Edina spreads scoring around in 7-0 romp over East Ridge 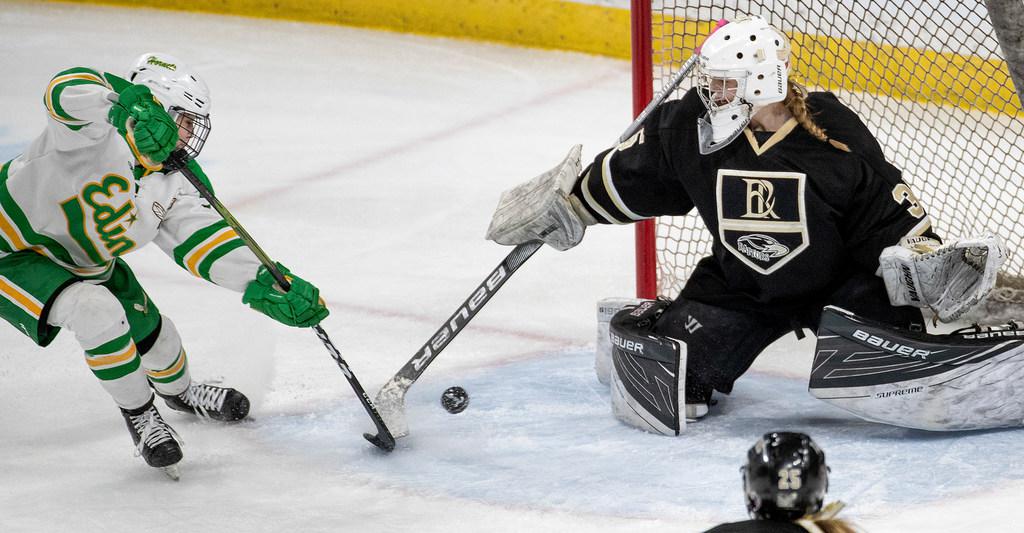 Edina freshman forward Jane Kuehl pounced on a loose puck during a scramble in the crease for what she called a “dirty goal” and a 1-0 lead. It was also some needed momentum after three early penalty kills in the Hornets’ game against East Ridge.

“It’s a big deal,” Kuehl said. “So to score the goal and… especially having the underclassmen motivate everyone, gets everyone really pumped up.”

Her ninth goal of the season got Edina started in a 7-0 Edina shutout of the unseeded Raptors on Thursday in the Class 2A quarterfinals at Xcel Energy Center. Kuehl centers top-seeded Edina’s third line with senior Olivia Swaim and sophomore Kylie Roberts. The top-seeded Hornets take pride in that depth, coach Sami Reber said.

“Jane’s line was rolling right from the drop of the puck, which was awesome to see,” Reber said.

Kuehl later added an assist. Five others scored goals for Edina (25-4-0). The Hornets scored four times in the second period, getting goalst just six seconds apart from Lucy Bowlby and Katie Davis to build a 5-0 lead.

Senior CC Bowlby scored her team-leading 27th and 28th goals of the season, including one shorthanded. Edina senior goaltender Elli Strittmater made 17 saves for her eighth shutout this season.

East Ridge (19-9-1), making its state tournament debut, went 0-for-7 on the power play. It had been a go-to element of their game in the regular seaon, when the Raptors converted 31 percent of the time, according to coach Kim McClintick.

“Not being able to squeeze one in was tough,” McClintick said.

The defending-champion Hornets held a 1-0 lead after the first period, then poured on the offense in the second, capped by two goals just six seconds apart in the Class 2A quarterfinals Thursday at Xcel Energy Center.

Freshman forward Jane Kuehl scored the first goal for the Hornets (25-4-0) in the first period as she pounced on a loose puck in the crease.

Senior CC Bowlby scored her 27th of the season just 1 minute, 7 seconds into the second period. Senior defenseman Evelyn Adams made it 3-0 with her third goal of the season on a power-play shot from the point.

Senior Annie Kuehl passed the puck to junior Lucy Bowlby, who scored at the goalmouth at the 11:42 mark of the second. Off the next faceoff at center ice, Katie Davis grabbed the puck, went into the zone and fired a high shot stick side to score six seconds after her teammate for a 5-0 lead.

The Hornets, in their ninth trip to state, are on a quest to become the first team to win three consecutive girls’ hockey titles since Minnetonka in 2011-13.

The Raptors (19-9-1) had their six-game winning streak snapped with the loss in their state tournament debut. Despite getting some early power-play time and more with a 5-on-3 advantage near the end of the second period, they couldn’t get anything going and finished 0-for-7 on the power-play.