The goals came early and often as the Mustangs, behind three goals apiece for Sadie Lindsay and Olivia Mobley, cruised to an 11-1 victory over Mound Westonka. 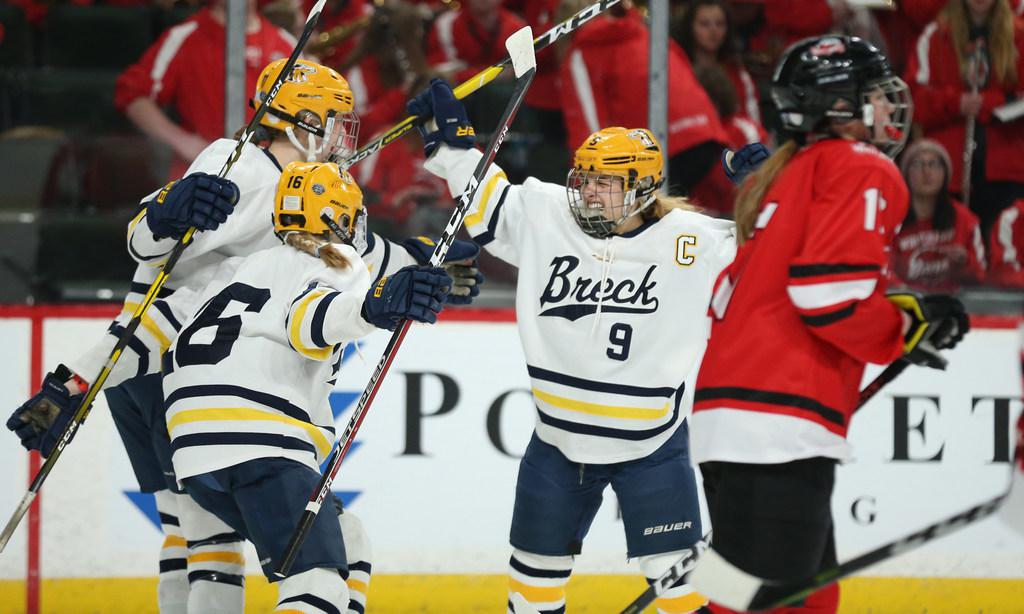 After winning a tight, defensive game in the state quarterfinals, Breck co-head coach Steve Persian said he wanted to see crisper puck movement in the next game.

So, the Mustangs put up 11 goals Friday in the Class 1A semifinal against Mound Westonka/Watertown-Mayer/Southwest Christian, including six in the first period alone.

“I think the first period is a testament to moving the puck and really crashing the net,” Persian said.

The second-seeded Mustangs scored early and often en route to an 11-1 victory at Xcel Energy Center.

Two of Mobley’s goals came 21 seconds apart in the first, the second coming on a mini breakaway.

“Coach stressed a lot getting the puck out, just chipping it off the glass,” said Mobley, who has a team-leading 32 goals this season. “My linemate Alley Qualley, she shot it right through the center of the ice. It was such a nice play.”

The defending-champion Mustangs (21-8-0) handed the No. 3-seeded White Hawks (23-1-5) their first loss of the season. Freshman defenseman Montana Courneya scored late in the second.

Breck eighth-grader Stella Retrum scored her sixth goal of the season on the rebound in front just 2 minutes, 21 seconds into the game, eight seconds longer than it took to get to 1-0 in its state quarterfinal game.

But unlike the quarterfinal, when second-seeded Breck (21-8-0) held onto the one-goal lead most of the way for a 2-0 win, the Mustangs put up six goals in the first period to set the tone for a 11-1 victory over No. 3 seed Mound Westonka/Watertown-Mayer/SW Christian on Friday in Class 1A semifinals at Xcel Energy Center.

Sophomore Sadie Lindsay registered her second hat trick of the season with two first-period goals and another to make it 9-0 in the second. She and senior Carly Beniek scored goals 26 seconds apart in the first period for the early 3-0 lead.

The Mustangs had three goals before the White Hawks registered a shot on goal. Breck outshot them 22-5 in the first period.

Still in the middle of the first period, the Mustangs scored three goals on three shots in a span of 1 minute, 7 seconds to go up 6-0 with 6:45 on the clock. Junior Olivia Mobley scored two goals 21 seconds apart, the second coming on a mini-breakaway after a heads-up pass up the ice from teammate Ally Qualley.

Breck scored four more in the second period first from freshman Shae Messner, and then the Lindsay sisters – eighth-grader Ava and Sadie – scored 22 seconds apart before Qualley made it a 10-0 lead.

Mobley finished off her fifth hat trick of the season 1 minute, 13 seconds into the third period. She has a team-leading 32 goals and 64 points this season.

The defending-champion Mustangs handed the No. 3-seeded White Hawks (23-1-5) their first loss of the season. Freshman defenseman Montana Courneya got them on the board with 2:26 to play in the second.