Junior Hannah Corneliusen scored two goals in the outburst for the No. 1 seed Warriors in their 5-2 victory to the Class 1A championship game. 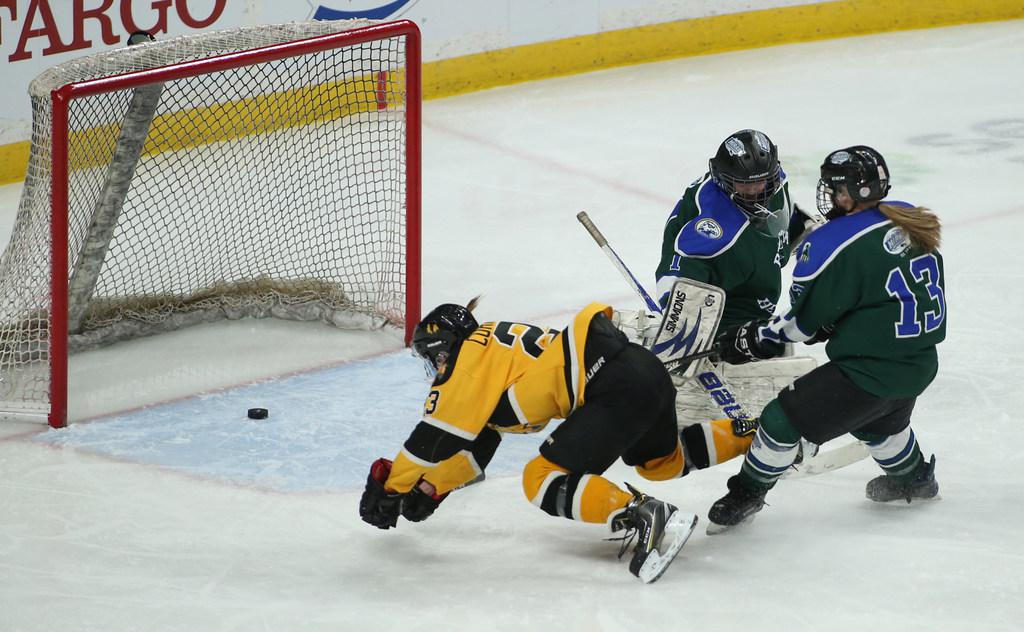 Top-seed Warroad found itself in unfamiliar territory, trailing 2-1 heading into the third period against Proctor/Hermantown.

Warriors coach David Marvin could only think of a couple examples this season when his team trailed.

“But the difference is we were playing pretty good then,” Marvin said. “So this, what we did in the third period, in my eyes, is even more special.”

Warroad (28-0-1) stormed back with four third-period goals to earn a 5-2 victory over the Mirage in the Class 1A semifinals Friday at Xcel Energy Center. Junior Hannah Corneliusen tied the game with 9:59 to play, then senior defenseman Kaitlyn Kotlowski put the Warriors in front for good 1:50 later.

Corneliusen scored again with under six minutes to play. Genevieve Hendrickson also had two goals in the game.

“Hannah’s a freight train and she doesn’t run out of gas,” Marvin said. “The longer she goes without scoring, the more she comes and the more she brings it.”

Alyssa Watkins gave the Mirage (19-8-3) a 2-1 lead with 1:33 left in the second period. It’s only the fourth time this season the Warriors allowed two or more goals in a game. They’ve outscored opponents 164-18 this season.

“It was so fun knowing that we put two goals on a very good goalie,” Watkins said. “Then we just knew that we had to start playing defensive and to defend our net, and that’s when we started thinking too much and the goals started going in.”

Top-seeded Warroad had some work to do in the third period. The Warriors were down 2-1 with an undefeated record and a trip to the Class 1A title game on the line.

The Warriors (28-0-1) took care of business with three goals in about a four-minute span in the third period to defeat No. 4-seeded Proctor/Hermantown 5-2 on Friday in the semifinals at Xcel Energy Center. Junior Hannah Corneliusen scored two goals in the third, tying the game at 2-2 with 9:59 left in regulation and later scoring her team's fourth goal.

Kaitlyn Kotlowski’s shot from the blue line got through traffic 1:50 after the Warriors tied the game to put them back in front for good, 3-2. Officials reviewed the play and determined it was a good goal.

Warroad took a 1-0 lead late in the first period on sophomore Genevieve Hendrickson’s fourth goal of the tournament and 23rd of the season. The puck deflected in off of her skates on a shot from senior McKenzie Oelkers as she drove the net.

Hendrickson scored her second goal of the game in the third period to extend the lead to 5-2.

The Mirage grabbed the momentum in the second period when it had a 5-on-3 advantage. Senior Dehli Heikes scored a power-play goal just after the two-man advantage expired to tie the game 1-1. Sophomore Alyssa Watkins made a cross-ice pass to Heikes who shot the puck from the right circle to beat the goaltender.

Not long before her goal, Heikes blocked a shot at the other end and skated down for a breakaway chance, but her shot went over the top of the net. Before that power-play time, the Warriors held  a 14-9 advantage in shots on goal. A few minutes later, the Mirage equaled that mark at 14-14 as its players buzzed around the offensive zone.

Watkins made it a 2-1 Mirage lead with 1:33 left in the second when she scored her 23rd of the season off a 2-on-1 chance after Warroad lost control of the puck at center ice.

It’s only the fourth time this season the Warriors allowed two or more goals in a game. They’ve outscored opponents 164-18 this season.