Senior Olivia Swaim's goal off a rebound gave the Hornets a 4-3 victory and their third consecutive Class 2A championship. 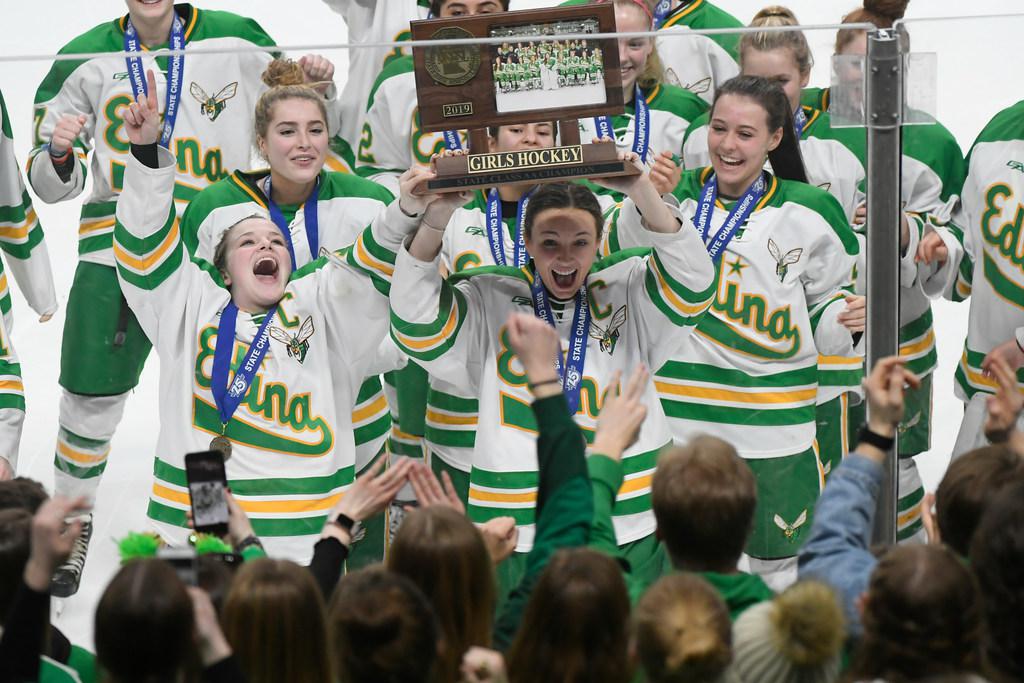 A milestone girls’ hockey state tournament was capped by one of the event’s greatest title games.

Her fifth goal of the season, what Swaim called “the best thing I’ve ever experienced,” gave top-ranked Edina its only lead. The Hornets (27-4) became the second program to win three consecutive state championships, the latest by coming back three times against No. 3 seed Brainerd/Little Falls.

“It took a lot more heart for this one,” Edina coach Sami Reber said of the differences in the Hornets’ three championship game victories.

The Class 2A state championship game played Saturday night at Xcel Energy Center took 61:20, trailing only the 2012 Class 1A title game — a 3-2 Breck victory over South St. Paul — that lasted 69:55.

Brainerd/Little Falls (25-5-1) was the first northern Minnesota team since 2008 to reach the championship game, and senior forward Cheyenne Abear started fast. Her shorthanded breakaway goal at 1:48 of the first period gave the Warriors a 1-0 lead.

Back came Brainerd/Little Falls, this time with senior forward Abby Pohlkamp’s goal at 4:02. Edina drew even again in the period on a tremendous effort from CC Bowlby. Tripped up on a rush into the Warriors zone, Bowlby played the puck from her stomach for freshman defender Vivian Jungels to bury.

The game turned physical. Doll got called for checking and Abear later went off for roughing. Both penalties led to power-play goals in the third period. Sophomore defender Emma Booth gave Brainerd a 3-2 lead. And Hornets junior forward Tella Jungels tied the score 3-3.

“We knew Brainerd was going to give it everything they’ve got and we were going to do the same, because it’s hard to back up one state championship, but two is even harder,” said Bowlby, Edina’s captain. “So it was great to see our players get dirty in the corners and keep battling through everything.”

King, the Brainerd/Little Falls senior, labored to keep the Hornets from fully cashing in on a 55-20 advantage in shots. Edina shots hit a few posts but mostly hit King, who turned away close encounters with streaking Hornets forwards and rapid-fire rebounds with aplomb, making 51 saves in all.

Annie Kuehl, who scored Edina’s game-winning goal in the semifinals against Minnetonka on Friday, got in alone midway through the second period, but King stopped her.

“She had our backs even when we didn’t have hers,” Abear said of King.

Reber heard from doubters who believed that if graduation wouldn’t trigger Edina’s demise, then a Section 6 championship game against Blake certainly would. But an experienced core group eager to extended the Hornets’ title run dug deep and created a dynasty.

“They weren’t going to go down without a fight,” Reber said. “It was a battle both ways, and I knew our girls wanted it.” 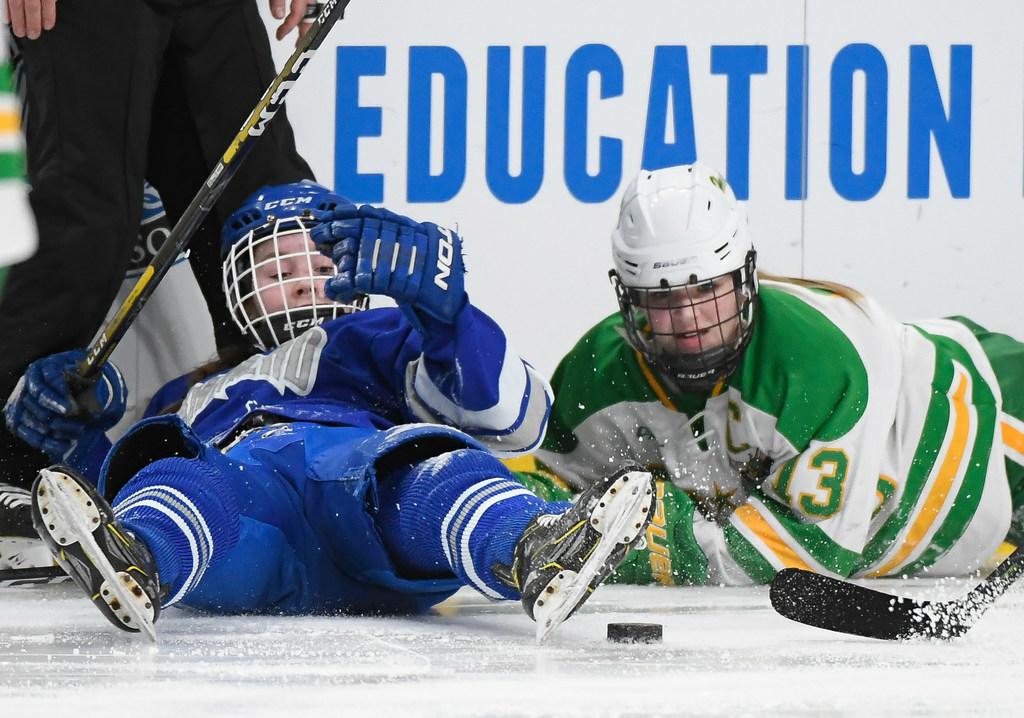 A milestone girls’ hockey state tournament was capped by one of the event’s greatest games.

Edina outlasted Brainerd/Little Falls by a 4-3 score in double-overtime to claim the 25th tournament crown. The Class 2A state championship game played Saturday at Xcel Energy Center was the second-longest, trailing only the 2012 Class 1A title game that lasted 69 minutes and 55 seconds.

Olivia Swaim scored the game-winning goal 1:20 into the second overtime.

No. 3 seed Brainerd (25-5-1) was the first northern Minnesota team since 2008 to reach the championship game.

On Friday, Minnetonka coach Eric Johnson, whose team played both Brainerd/Little Falls and Edina this season, predicted a lower-scoring game based on both team’s defensive efforts in the semifinals.

But the goals kept coming in the first period.

Senior forward Cheyenne Abear scored to start the championship game the way she ended the semifinals, with a huge goal in a short amount of time. Her shorthanded breakaway goal at 1:48 gave the Warriors a 1-0 lead.

Back came Brainerd/Little Falls, this time on senior forward Abby Pohlkamp’s goal at 4:02.

Edina drew even again as freshman defender Vivian Jungels finished a chance made possible by a tremendous effort from teammate CC Bowlby. Tripped up on a rush into the Warriors’ zone, Bowlby played the puck from her stomach toward Jungles to bury.

Period two belonged to the goaltenders. Edina held a 31-9 shots on goal advantage through the first 34 minutes but Brainerd/Little Falls senior goaltender Olivia King kept the Hornets from scoring.

Annie Kuehl, who scored the game-winning goal in the semifinals, got in alone midway through the second period but King stopped her.

On the other end, Edina senior Elli Strittmater saw fewer shots but proved capable when needed. She slid to get her right leg pad on a puck and stop a 2-on-1 try.

The game turned physical as well. Doll got called for checking and Abear went off for roughing.

Edina paid for its physical play in the third period as Kuehl drew a roughing penalty in the first minute. Brainerd/Little Falls administered the payback on sophomore defender Emma Booth’s power-goal at 1:32 for a 3-2 lead.

Then Brainerd/Little Falls flirted with disaster moments later as Gabbie Smith received a 5-minute major penalty for checking from behind.

The Hornets made it count. Hannah Chorske carried the puck in deep and created a chance for Tella Jungels to stuff it past King and tie the game 3-3. King made 10 saves during the major penalty.