Saturday notes from the X: Referee's calls irritate Warroad coach in 1A final

A Minnesota State High School League official said the calls were correct. Plus getting buy-in, a record performance, and more. 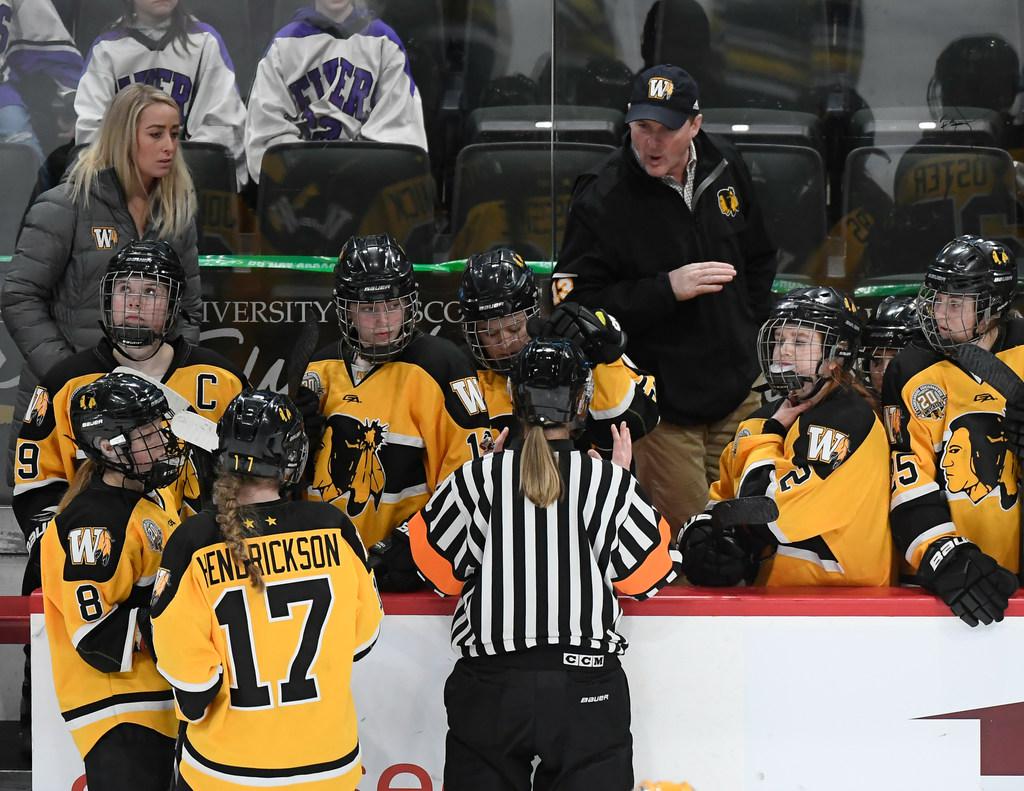 Warroad coach David Marvin argued with an official after she whistled the play dead with the puck still loose in front of Breck's goal. Warroad scored an apparent goal but it would not count. Photo: Aaron Lavinsky, aaron.lavinsky@startribune.com

Most of what Warroad coach David Marvin talked about in the postgame news conference after his team’s 6-1 loss to Breck focused on two calls on the ice in the third period. Referee Jestina Vichorek blew the whistle after an initial shot hit the Breck goaltender’s body and then bounced away.

A few minutes later, Vichorek awarded Breck a penalty shot on a delay-of-game call against Warroad.

“She blew the call dead early, she makes a mistake. Everybody makes them,” Marvin said. “And then goes down to the other end, can’t find her whistle, and then all of a sudden comes up with a penalty shot.

“How many state championship games have you seen happen like that in a stretch?”

“She blew the whistle because she lost sight of the puck, which is what referees are instructed to do,” Kronschnabel said.

Kronschnabel was in the replay booth when the penalty shot was called with 4:44 left in regulation.

Breck chose sophomore Sadie Lindsay, on the ice at the time of the penalty, for the penalty shot. She scored to make it 4-1. It was the first penalty shot goal scored in girls’ state tournament history.

Buy-in is the secret

“That buy-in was there last year, but I know that from the day last season ended until now, the kids and their parents are doing what it takes to get better,” Marvin said. “Whether it’s summer training, weightlifting, spring and fall hockey — we don’t have anyone pulling in a different direction.”

At Breck, a private school in Golden Valley, Ronda (Curtin) Engelhardt left as coach in mid-July to coach the Minnesota Whitecaps of the National Women’s Hockey League. New co-head coaches Keith Radloff and Persian arrived at Breck in early October.

“It took some time, not only to get buy-in but just to learn players’ names,” Persian said. “It was a lot of, ‘What number are you?’  ”

“Hopefully, we have done what we need to do to make these people know that we create the right culture and hopefully deliver what these kids and families are looking for,” Persian said.

Saturday’s two-game session had attendance of 2,798.

Class 2A: Trailing by a goal entering the third period, Minnetonka rallied for a 3-2 victory against Andover.